This week the spotlight is on Dr Nick Shepley, teaching fellow in UCL English and organiser of 'One Day In The City', a bi-annual celebration of literature and London at UCL. 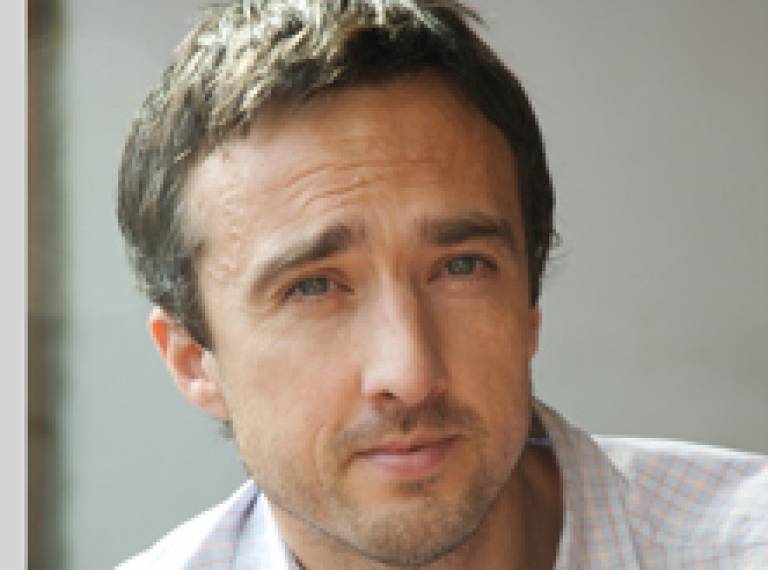 I lecture and teach on a number of undergraduate and postgraduate courses in the English department at UCL. My research interests are primarily in Henry Green, the 1930s, the one-day novel, contemporary fiction and comics, but I am lucky enough to teach a broad range of texts: the first-year course, "Intellectual and Cultural Sources", for example, allows me to revisit

Homer, Virgil, Sophocles, Plato, Aristotle, St Augustine or Dante, to name a few; "London in Literature" is a pan-historical and contextually rich option, immersed in the streets I walk daily; whilst the "Moderns II: Post-1945 Literature" option or the MA in Issues in Modern Culture both allow me to extend the literary lens into film, TV and comics. Not a bad day-to-day really.

I've been a part of the UCL English department since 2005, when I was an MA student on the very same Issues in Modern Culture course which I now teach on. In 2006, I started my PhD on Henry Green, under the expert and kind supervision of Professor Rachel Bowlby, and I have been teaching in the department since 2010. Prior to UCL, I was a volunteer for VSO in Namibia, where I taught English for just over two years in a rural Ovambo village, just south of Ondangwa; it was a somewhat different environment with infrequent electricity, no internet or mobile phone connections, no hot water and the nearest post office or supermarket a 40km hike away, but it was no less stimulating than central London. They were some of the happiest and most fulfilling years of my life.

The most difficult and rewarding achievement, for me, has been the setting up and success of "One Day in the City", in June 2012. It came about in response to the hike in student fees, which were casting a pall over Arts and Humanities' faculties around the UK. The idea was, therefore, to have a celebration of London and literature, which was free to the general public, which opened up the sometimes intimidating doors of UCL and which created a platform for showcasing the rich and vibrant culture borne out of this great city and university. And we certainly achieved some of that, bringing Dame A.S. Byatt, Alan Hollinghurst, Will Self, Daljit Nagra, Salena Godden, Adam Thirlwell, Alan Jenkins and Iain Sinclair, amongst others, into packed lecture theatres in UCL and crowding the South Cloisters with enormous yellow balloons and zig-zag installations.

Perhaps even more satisfying, though, are the links we have been lucky enough to establish through the setting up of such a day. We work with the amazing charity, First Story, and now have two or more days a year where disadvantaged schoolchildren come into UCL Museums, team up with published authors and poets and, after a creative-writing workshop, read out their work in front of everyone. Our Sustainable Cities Grant also enabled us to team up with DocsinaDay (Michael Stewart, UCL Anthropology), and we made films with students from UCL Academy, after an 8-week course of writing and filming workshops.

It's the unexpected links that spring up which seem the most powerful.

Top of my to-do list now is our second "One Day in the City" event, which is taking place on Friday 13 June (because we aren't that superstitious). After the success of 2012, it is all rather nerve-wracking, but we've got another exciting line-up with Kazuo Ishiguro, John Agard, Patience Agbabi, Will Self (again), India Knight, D.J. Taylor and Jonathan Coe all coming along. There's going to be a carnivalesque feel this time round with London Liming (you'll have to do the research). And, perhaps most unusual, are the "in-a-nutshell" pop-ups, where members of the English department and some of our authors will give a 20-minute introduction to something London or literary. These will take place in intimate settings - either a small seminar or over a cup of tea in a quiet corner - and will offer visitors the chance to have an extended chat with the experts…

I'm not really a favourites kind-of-guy. But if pushed I always tend to plug for David Bowie's Hunky Dory, as my favourite album. To have a favourite novel is impossible: Infinite Jest is one of the best contemporary novels I have read; I am a big fan of Haruki Murakami, particularly The Wind-up Bird Chronicle; for something short and unusual, I like Nicholson Baker's The Mezzanine; and Chris Ware is an obsessive and crazy comic genius - see Jimmy Corrigan or Building Stories.

Eat well, drink less, follow through on everything and stop worrying: things have a tendency to work out.

Perhaps that I coach tennis at the weekends?

There's a bench under a cherry blossom in a garden in Kent where you will often find me in March.