"Where does it hurt?" is the first question asked to any person in pain. 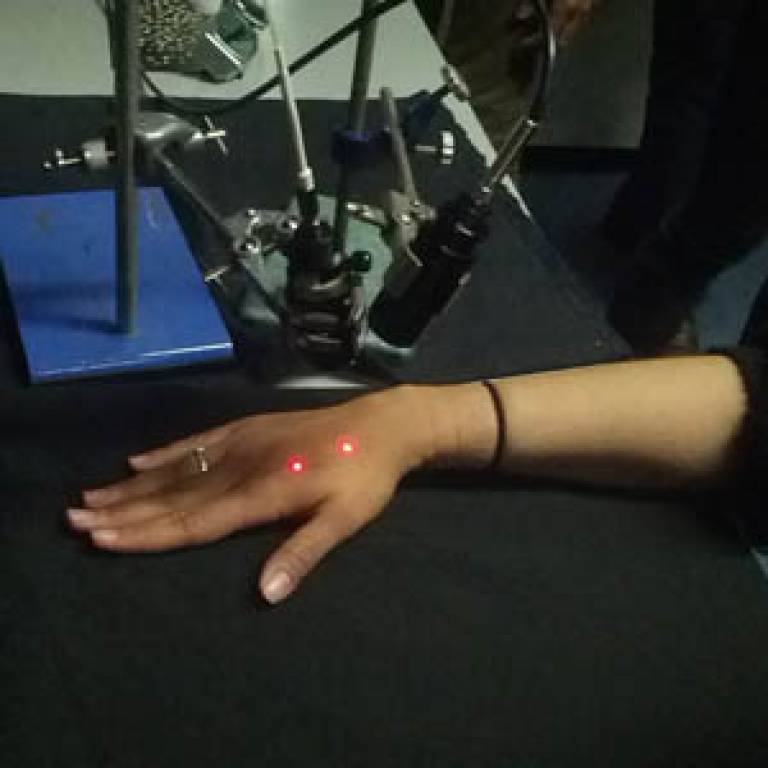 A new UCL study defines for the first time how our ability to identify where it hurts, called "spatial acuity", varies across the body, being most sensitive at the forehead and fingertips.

Using lasers to cause pain to 26 healthy volunteers without any touch, the researchers produced the first systematic map of how acuity for pain is distributed across the body. The experiment, conducted in the group led by Dr Giandomenico Iannetti (UCL Neuroscience, Physiology and Pharmacology), is published in the journal Annals of Neurology and was funded by the Wellcome Trust.

With the exception of the hairless skin on the hands, spatial acuity improves towards the centre of the body whereas the acuity for touch is best at the extremities. This spatial pattern was highly consistent across all participants.

The experiment was also conducted on a rare patient lacking a sense of touch, but who normally feels pain. The results for this patient were consistent with those for healthy volunteers, proving that acuity for pain does not require a functioning sense of touch.

"Acuity for touch has been known for more than a century, and tested daily in neurology to assess the state of sensory nerves on the body. It is striking that until now nobody had done the same for pain," says lead author Dr Flavia Mancini of the UCL Institute of Cognitive Neuroscience. "If you try to test pain with a physical object like a needle, you are also stimulating touch. This clouds the results, like taking an eye test wearing sunglasses. Using a specially-calibrated laser, we stimulate only the pain nerves in the upper layer of skin and not the deeper cells that sense touch."

Volunteers were blindfolded and had specially-calibrated pairs of lasers targeted at various parts of their body. These lasers cause a brief sensation of pinprick pain. Sometimes only one laser would be activated, and sometimes both would be, unknown to participants. They were asked whether they felt one 'sting' or two, at varying distances between the two beams. The researchers recorded the minimum distance between the beams at which people were able to accurately say whether it was one sting or two.

"This measure tells us how precisely people can locate the source of pain on different parts of their body," explains senior author Dr Giandomenico Iannetti. "Touch and pain are mediated by different sensory systems. While tactile acuity has been well studied, pain acuity has been largely ignored, beyond the common textbook assertion that pain has lower acuity than touch. We found the opposite: acuity for touch and pain are actually very similar. The main difference is in their gradients across the body. For example, pain acuity across the arm is much higher at the shoulder than at the wrist, whereas the opposite is true for touch."

Acuity for both touch and pain normally correlates with the density of the relevant nerve fibres in each part of the body. However, the fingertips remain highly sensitive despite having a low density of pain-sensing nerve cells.

"The high pain acuity of the fingertips is something of a mystery that requires further investigation," says Dr Mancini. "This may be because people regularly use their fingertips, and so the central nervous system may learn to process the information accurately."

The findings have important implications for the assessment of both acute and chronic pain. Dr Roman Cregg of the UCL Centre for Anaesthesia, who was not involved in the research, is a clinical expert who treats patients with chronic pain.

"Chronic pain affects around 10 million people in the UK each year according to the British Pain Society, but we still have no reliable, reproducible way to test patients' pain acuity," says Dr Cregg. "This method offers an exciting, non-invasive way to test the state of pain networks across the body. Chronic pain is often caused by damaged nerves, but this is incredibly difficult to monitor and to treat. The laser method may enable us to monitor nerve damage across the body, offering a quantitative way to see if a condition is getting better or worse. I am excited at the prospect of taking this into the clinic, and now hope to work with Drs Mancini and Iannetti to translate their study to the chronic pain setting."