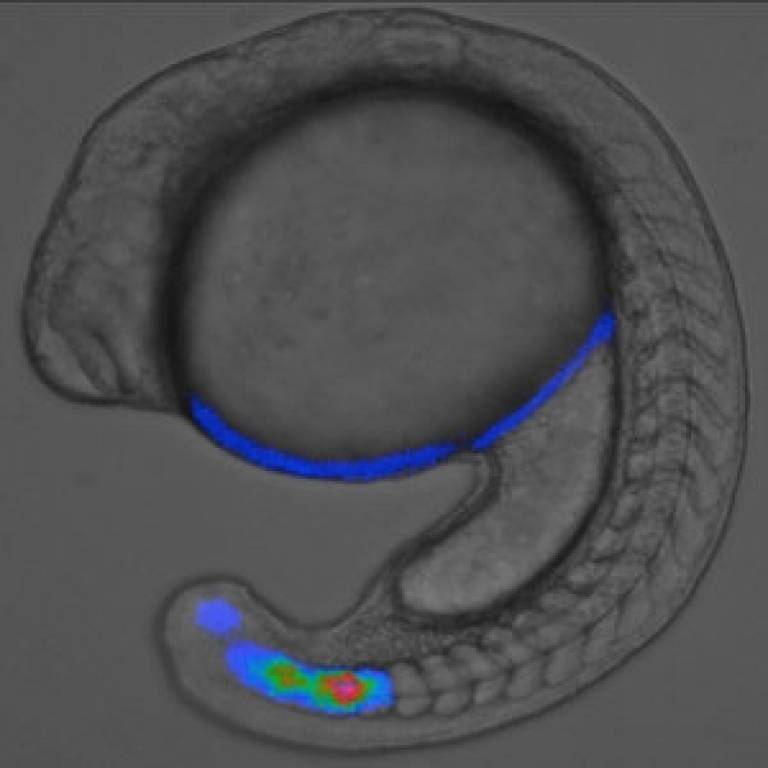 The scientists discovered that the development of vertebrate embryos (animals with backbones, including humans) is partly determined by a genetic Doppler effect.

Professor Andrew Oates (UCL Cell & Developmental Biology) explained: "The rhythm of body segment formation during the development of vertebrate embryos was thought to be set directly by the internal timing of a genetic oscillator - a genetic circuit that is expressed in a rhythmic pattern - called the 'segmentation clock'." The output of this clock appears as waves sweeping across the embryonic tissue, emerging from one end and terminating at the other end when new segments form.

Professor Oates and his team engineered zebrafish embryos to express a fluorescent 'tag' on a gene that is part of the genetic oscillator. They then made movies of these embryos as they grew during the first day of life and compared the timing of segment formation to the timing of the waves of gene expression.

The only previous example of a Doppler effect in biology was in echo-location, used by bats and dolphins to navigate using sonar. Our new discovery is probably the world's slowest Doppler effect.

Unexpectedly, this time-lapse microscopy revealed that the body segments form faster than the waves emerge in the end of the tissue.

"This paradoxical situation is caused by a Doppler effect that occurs as the end of the oscillating tissue where the segments form grows steadily into the oncoming waves," explained Professor Oates.

"While we previously thought that the rhythm of segmentation depended only on the frequency of the segementation clock, this finding shows us that the shape of the waves, as well as the rate of embryonic growth also set the rhythm.

"The only previous example of a Doppler effect in biology was in echo-location, used by bats and dolphins to navigate using sonar. Our new discovery is probably the world's slowest Doppler effect."

The findings may have implications for detecting or blocking birth defects affecting the backbone - called congenital scoliosis - caused when something goes wrong with the formation of body segments in the embryo.