After a string of penalties aimed in the same direction, goalkeepers are more likely to dive in the opposite direction on the next penalty but kickers fail to exploit this pattern, finds new UCL research. 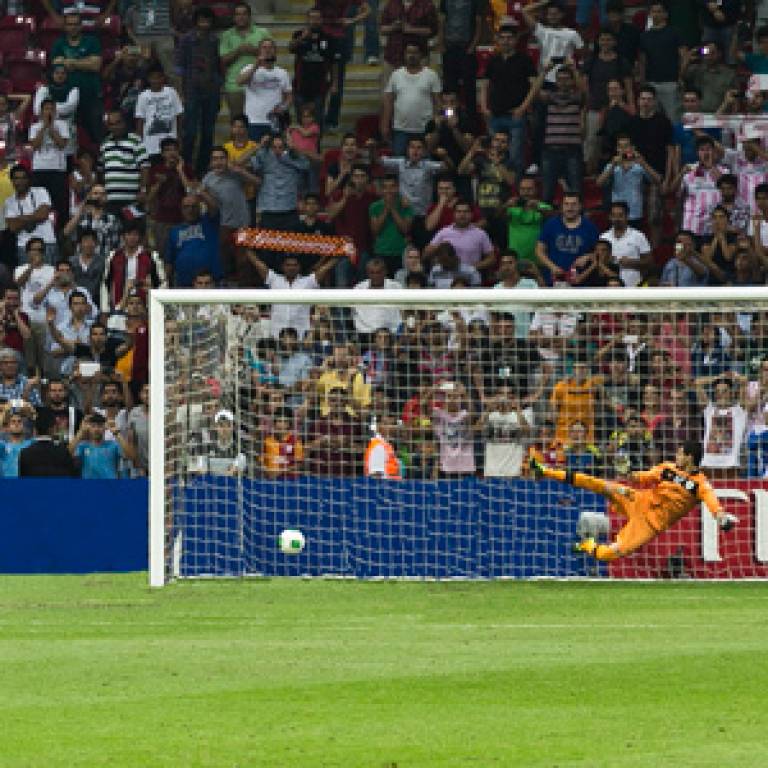 They found that each team of kickers produced more or less random sequences of kicks to the left or the right of the goal. Goalkeepers' dives to the left or the right were not related to the direction of the kick, suggesting that goalkeepers at this elite level make their decisions in advance, rather than reacting to each kick. However, goalkeepers' decisions were non-random in one crucial respect: when the kickers repeatedly kicked in the same direction on consecutive penalties, goalkeepers became more likely to dive in the opposite direction on the next penalty. After three consecutive shots in one direction, goalkeepers dive in the opposite direction for the next penalty around 69% of the time.

The goalkeepers therefore display what has been called the 'gambler's fallacy' - like a person who believes that after coin flips produce a run of 'heads', the next flip is bound to produce 'tails'.

"Complete randomness is generally the best strategy in competitive games" says lead author Erman Misirlisoy of the UCL Institute of Cognitive Neuroscience. "Because the goalkeeper displays the gambler's fallacy, kickers could predict which way the goalkeeper is likely to dive on the next kick. That would obviously give the kicker an advantage - they would simply aim for the opposite side of the goal. Surprisingly, though, we found that kickers failed to exploit this advantage".

This demonstrates a crucial link between the habenula and motivated behaviour, which may be the result of dopamine suppression.

"Often you can only win in elite sport by exploiting tiny weaknesses in your opponent's strategy", explains senior author Professor Patrick Haggard. "We can only speculate on why goalkeepers can get away with non-randomness, without the kickers exploiting it. One possibility is that penalty shoot-outs are relatively rare. But there is a more psychologically interesting possibility: shoot-outs are asymmetric, because one goalkeeper faces several different kickers, one after the other. Kickers are under enormous pressure, focussed on the moment of their own kick. Each individual kicker may not pay enough attention to the sequence of preceding kicks to predict what the goalkeeper will do next."

Erman Misirlisoy adds: "People can learn to predict: perhaps football coaches could study the gambler's fallacy, and could train their penalty kickers in preparation for the next World Cup. At the same time, goalkeepers could also learn to be less predictable".