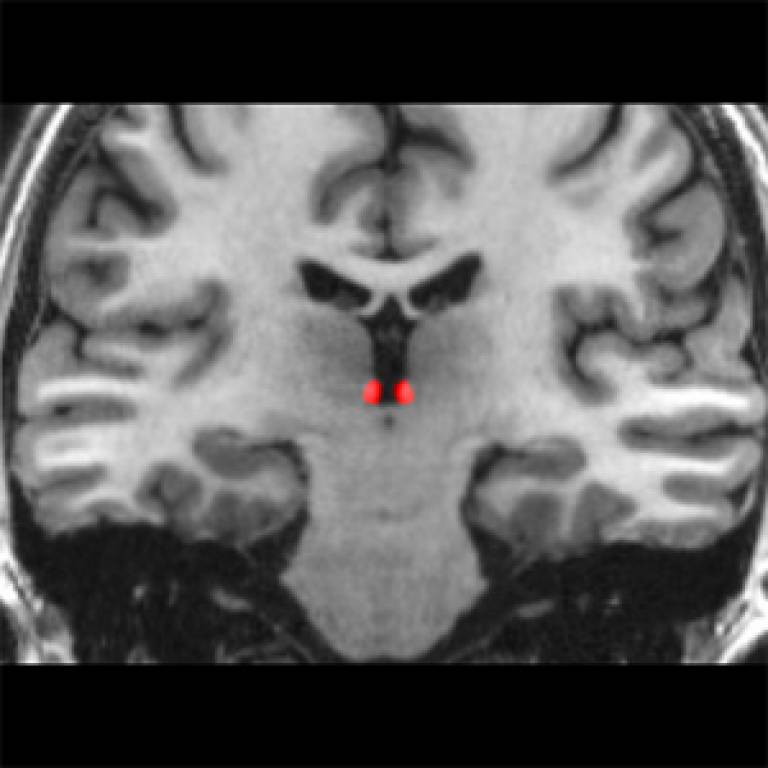 The study, published in Proceedings of the National Academy of Sciences, demonstrates for the first time that the human habenula, half the size of a pea, tracks predictions about negative events, like painful electric shocks, suggesting a role in learning from bad experiences.

Brain scans from 23 healthy volunteers showed that the habenula activates in response to pictures associated with painful electric shocks, with the opposite occurring for pictures that predicted winning money.

Previous studies in animals have found that habenula activity leads to avoidance as it suppresses dopamine, a brain chemical that drives motivation. In animals, habenula cells have been found to fire when bad things happen or are anticipated.

"The habenula tracks our experiences, responding more the worse something is expected to be," says senior author Dr Jonathan Roiser of the UCL Institute of Cognitive Neuroscience. "For example, the habenula responds much more strongly when an electric shock is almost certain than when it is unlikely. In this study we showed that the habenula doesn't just express whether something leads to negative events or not; it signals quite how much bad outcomes are expected."

This demonstrates a crucial link between the habenula and motivated behaviour, which may be the result of dopamine suppression.

During the experiment, healthy volunteers were placed inside a functional magnetic resonance imaging (fMRI) scanner, and brain images were collected at high resolution because the habenula is so small. Volunteers were shown a random sequence of pictures each followed by a set chance of a good or bad outcome, occasionally pressing a button simply to show they were paying attention. Habenula activation tracked the changing expectation of bad and good events.

"Fascinatingly, people were slower to press the button when the picture was associated with getting shocked, even though their response had no bearing on the outcome." says lead author Dr Rebecca Lawson, also at the UCL Institute of Cognitive Neuroscience. "Furthermore, the slower people responded, the more reliably their habenula tracked associations with shocks. This demonstrates a crucial link between the habenula and motivated behaviour, which may be the result of dopamine suppression."

The habenula has previously been linked to depression, and this study shows how it could be involved in causing symptoms such low motivation, pessimism and a focus on negative experiences. A hyperactive habenula could cause people to make disproportionately negative predictions.

"Other work shows that ketamine, which has profound and immediate benefits in patients who failed to respond to standard antidepressant medication, specifically dampens down habenula activity," says Dr Roiser. "Therefore, understanding the habenula could help us to develop better treatments for treatment-resistant depression."