UK scientists have used the ALMA telescope to help capture the remains of a recent supernova - or exploding star - that is brimming with freshly formed dust 160,000 light years from Earth. 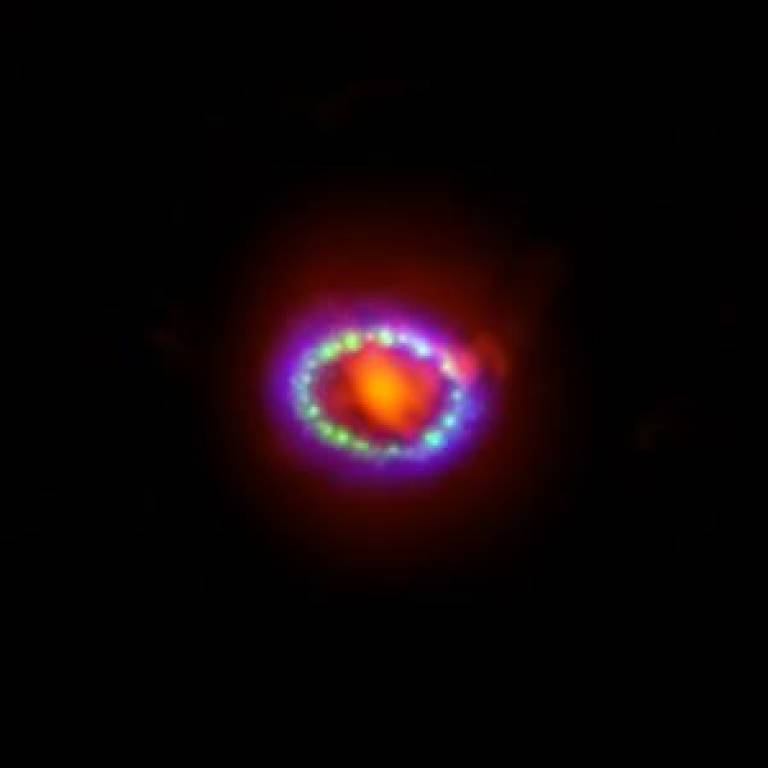 Supernovae are thought to produce a large amount of the dust within galaxies, especially in the early Universe, but direct evidence of their ability to create dust has been limited - until now. The results appear in Astrophysical Journal Letters.

An international team of scientists including those from UCL and Keele University have used the European Southern Observatory (ESO)'s Atacama Large Millimetre/submillimetre Array (ALMA) telescope to observe the glowing remains of Supernova 1987A.

The relatively young supernova is in the Large Magellanic Cloud, a dwarf galaxy orbiting the Milky Way about 160,000 light‐years from Earth. SN 1987A is the closest observed supernova explosion since Johannes Kepler's observation of a supernova inside the Milky Way in 1604.

"Really early galaxies are incredibly dusty and this dust plays a major role in the evolution of galaxies," said Dr Mikako Matsuura (UCL Physics & Astronomy). "Today we know dust can be created in several ways, but in the early Universe most of it must have come from supernovae. We finally have direct evidence to support that theory."

Today we know dust can be created in several ways, but in the early Universe most of it must have come from supernovae. We finally have direct evidence to support that theory.

Astronomers predicted that as the gas cooled after the explosion, large amounts of dust would form as atoms of oxygen, carbon, and silicon bonded together in the cold central regions of the remnant. However, earlier observations of SN 1987A with infrared telescopes, made during the first 500 days after the explosion, detected only a small amount of hot dust.

With ALMA's unprecedented resolution and sensitivity, the research team was able to image the far more abundant cold dust, which glows brightly in millimetre and submillimetre light. The astronomers estimate that the remnant now contains about 25 percent the mass of the Sun in newly formed dust. They also found that significant amounts of carbon monoxide and silicon monoxide have formed.

Dr Jacco van Loon from the Lennard-Jones Laboratories, Keele University, said:"Since we first detected cold dust in the direction of SN1987A with telescopes in space and on the Atacama Altiplano we have been using the most powerful observing facilities on Earth to zoom in on the exact location of this dust and separate its radiation from that of other sources of radio emission. It took the many dishes of the new ALMA observatory, that joined together to mimic a very large telescope, to finally confirm what astronomers hoped to find."

Masa Lakicevic, a PhD student at Keele University, and Professor Michael J Barlow (UCL Physics & Astronomy) are the other two UK authors on the paper in Astrophysical Journal Letters which is entitled, 'Dust Production and Particle Acceleration in Supernova 1987A Revealed with ALMA'.