UCL Academy student Brahim Mansour has become the first-ever pupil at the UCL-sponsored school to be accepted for a place at UCL. 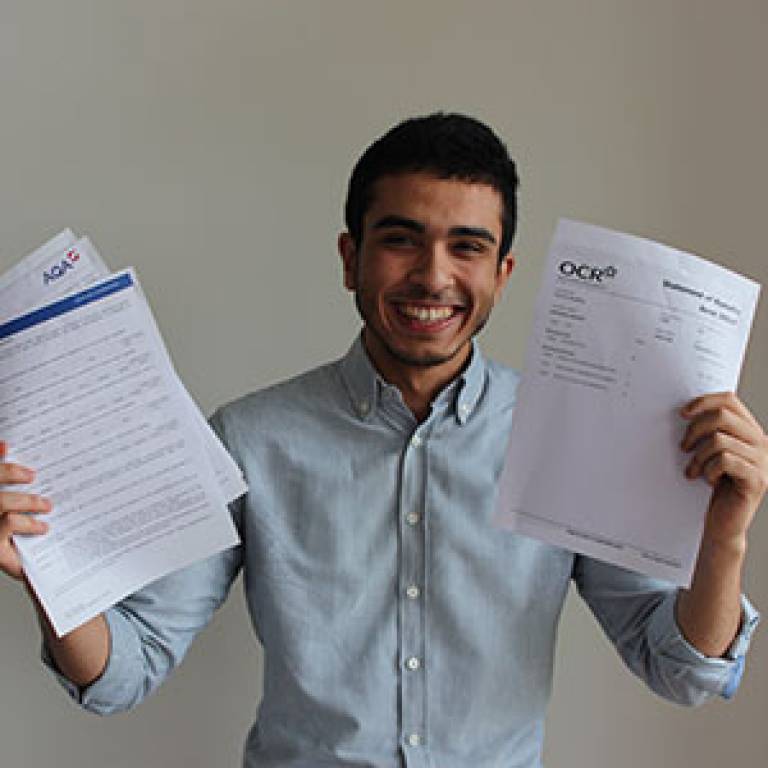 Brahim achieved three A*s in his A level results, in biology, maths and chemistry, and will be arriving at UCL this September to study chemistry.

The UCL Academy's first set of A level results saw 80% of students entries achieving the higher A*-C grades at A2 level, and Academy students will be taking up places at universities that also include Cambridge, Bristol and King's College London.

Brahim highlighted the opportunity to study at UCL for the first two weeks of his A level course as part of the Academy's induction programme as key to his decision to apply to UCL. "What made me really want to come to UCL was its acceptance of students from all over the world, which made me feel that I would get an understanding of different cultures and an appreciation of the world in its entirety."

He added: "My long-term desire is to synthetically manufacture pharmaceutical drugs which could help people who suffer from various diseases and disorders. I would also love to explore the lost parts of chemistry, and to maybe discover something which would shape the science we know today."

"I am immensely proud of Brahim's achievements. As a 'UCL Academy Pioneer' his cohort has been the first of many to benefit from the unique experience of studying at an Academy sponsored by one of the best universities in the world. It is through the work with our sponsor UCL that we have been able to create an environment that has inspired, challenged and supported him and many others in achieving such excellent results."

"The first ever Academy student to be admitted to UCL is something of a landmark for us, and we are really excited to be welcoming Brahim. The relationship between the school and the university is a close one, and I believe our ability to learn from and support each other has been crucial to the success of Brahim and the other students who have achieved such outstanding results this year."