People who ate seven or more portions of fruit and vegetables a day had a 42% lower risk of death at any point in time than those who ate less than one portion, reports a new UCL study. 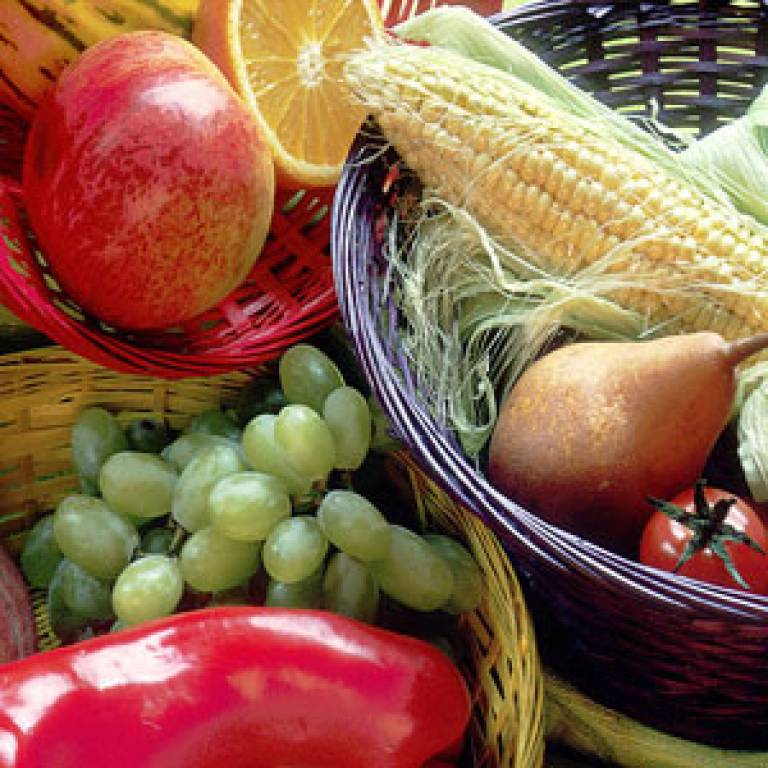 Researchers used the Health Survey for England to study the eating habits of 65,226 people representative of the English population between 2001 and 2013, and found that the more fruit and vegetables they ate, the less likely they were to die at any age. Eating seven or more portions reduces the specific risks of death by cancer and heart disease by 25% and 31% respectively. The research also showed that vegetables have significantly higher health benefits than fruit.

Compared to eating less than one portion of fruit and vegetables, the risk of death by any cause is reduced by 14% by eating one to three portions, 29% for three to five portions, 36% for five to seven portions and 42% for seven or more. These figures are adjusted for sex, age, cigarette smoking, social class, Body Mass Index, education, physical activity and alcohol intake, and exclude deaths within a year of the food survey.

The study, published in the Journal of Epidemiology & Community Health, found that vegetables had the strongest protective effect, with each daily portion reducing overall risk of death by 16%. Salad contributed to a 13% risk reduction per portion, and each portion of fresh fruit was associated with a smaller but still significant 4% reduction.

"We all know that eating fruit and vegetables is healthy, but the size of the effect is staggering," says Dr Oyinlola Oyebode of UCL's Department of Epidemiology & Public Health, lead author of the study. "The clear message here is that the more fruit and vegetables you eat, the less likely you are to die at any age. Vegetables have a larger effect than fruit, but fruit still makes a real difference.  If you're happy to snack on carrots or other vegetables, then that is a great choice but if you fancy something sweeter, a banana or any fruit will also do you good."

Whatever your starting point, it is always worth eating more fruit and vegetables. In our study even those eating one to three portions had a significantly lower risk than those eating less than one.

The findings lend support to the Australian government's 'Go for 2 + 5' guidelines, which recommend eating two portions of fruit and five of vegetables. The UK Department of Health recommends '5 a day', while 'Fruit and Veggies - More Matters' is the key message in the USA.

"Our study shows that people following Australia's 'Go for 2 + 5' advice will reap huge health benefits," says Dr Oyebode. "However, people shouldn't feel daunted by a big target like seven. Whatever your starting point, it is always worth eating more fruit and vegetables. In our study even those eating one to three portions had a significantly lower risk than those eating less than one."

"Most canned fruit contains high sugar levels and cheaper varieties are packed in syrup rather than fruit juice," explains Dr Oyebode. "The negative health impacts of the sugar may well outweigh any benefits. Another possibility is that there are confounding factors that we could not control for, such as poor access to fresh groceries among people who have pre-existing health conditions, hectic lifestyles or who live in deprived areas."