The courts - two of which are in the Talacre sports centre in Kentish Town, with three other indoor and two outdoor courts available for use at the UCL Academy in Swiss Cottage - were opened with a demonstration from the UK Wallball team. 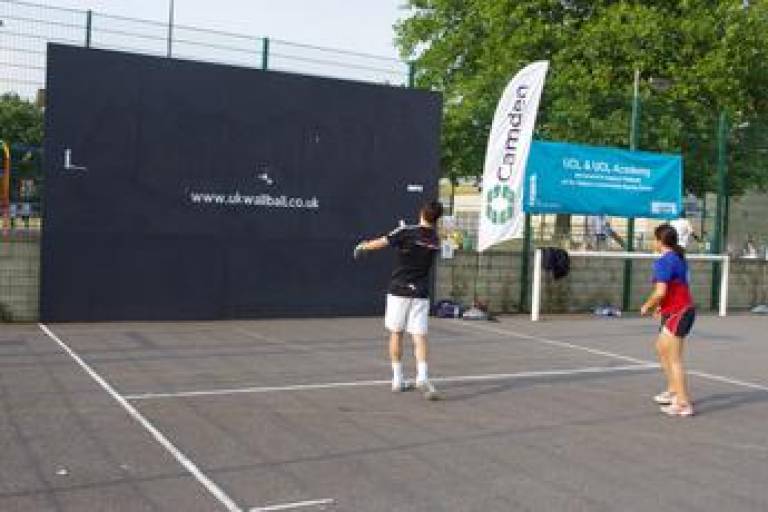 The courts are free to use and aim to inspire a new generation of British sportsmen and women to take up what is hoped could be a new Olympic sport by the 2028 Olympic Games. Team GB's Wallball team will also train at the new facilities.

Led by UK Wallball, the sport's representatives are bidding for Olympic status for the 2028 Olympic Games, as part of which it will be debut as a demonstration sport at the Rio Olympic Games.

The World Games includes sports which are not yet Olympic sports, but many of which have the potential to be chosen in the future.

Wallball originally gained popularity in New York City in the 19th Century, having been brought from Europe by Irish immigrants. There are now 2500 courts in the city, many of them on the street and free to use.

After spotting the potential mass appeal of the sport, it was this similarity which led teacher James Toop to bring it back to the UK in 2007 following a trip to the Big Apple.

"We're hoping that the funding UCL has invested in the wallball courts will reap big rewards in years to come - inspiring a new generation to take up a new sport and improve their confidence and fitness at the same time.

UCL is a global university and we wanted to reflect that by funding courts for a sport which is popular worldwide and increasingly popular in the UK, too."

"The new facilities will also be a massive boost to the training facilities on offer for Team GB's wallball players, both now and in the future. It's especially exciting that thanks to UCL we'll hopefully produce the next generation of Olympic gold medal winners.

UCL, along with the UCL Academy, has funded seven new courts for Wallball - a future Olympic sport - for free public use in Camden.

Commenting on the opening of the new courts, Daniel Grant, President of UK Wallball and a member of Team GB's wallball team, added:

"The great thing about wallball is that the sport is open to anyone - all Camden's youngsters need to do is come along to the courts."