in2scienceUK: out of the classroom and into the lab 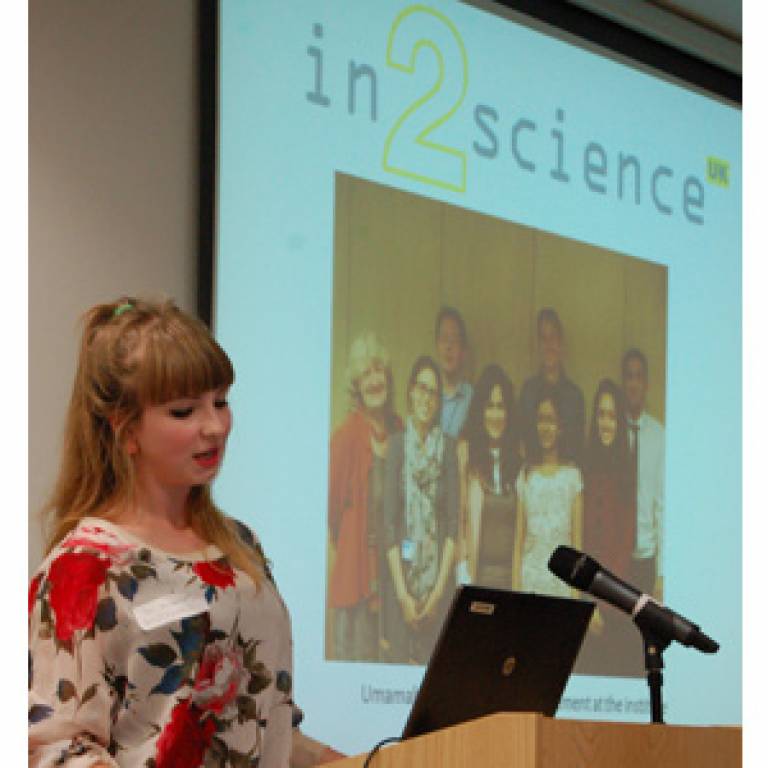 The scheme, led by UCL PhD student Rebecca McKelvey, is now in its fourth year and has helped in excess of 150 students obtain science placements at leading UK universities including UCL, Imperial College London and King's College London.

in2scienceUK is building a reputation for providing students with essential advice and valuable insights. This year it received more than 300 applications for 41 London placements and has now expanded its activity to include the Bath and Bristol areas.

Ms McKelvey said: "The overall aim of the scheme is to increase the numbers of students from less well represented backgrounds going to university to study science. The scheme supports students by giving them opportunities such as placements and advice which they really need when competing for university places and which they may not receive at home or school."

To date, around 80 per cent of students participating in in2scienceUK have successfully applied to study for a STEM degree at a leading UK university.

To date, around 80 per cent of the students participating in in2scienceUK have successfully applied to study for a STEM (science, technology, engineering, and mathematics) degree at a leading UK university.

Dr Adam Giangreco (UCL Division of Medicine - Lungs for Living Research Centre) has acted as a mentor for students on the in2scienceUK programme. He says: "In the lab we look at some of the early causes of lung cancer. Our students were able to examine some of the cells from patients with suspected lung cancer and question us about what we do. It was a real, hands-on experience and it was great to be able to give them a feel for how we carry out research in a medical setting."

One of the students who participated in this year's scheme, Holly Bickell, said: "My placement was for two weeks and took place in Professor Jenny Morgan's lab at the Dubowitz Neuromuscular Centre in UCL's Institute of Child Health. I got opportunities that wouldn't have been possible without in2scienceUK - shadowing Dr Karen Anthony and working on a project to assess immune responses in Duchenne muscular dystrophy."

Holly, an aspiring medical student, continues: "I was an A* student who went to an underachieving secondary school. I was always being praised for my achievements and thought I was the bee's knees. I decided to change schools when I started Year 12 but things didn't go as expected. I found it hard to settle in and I wasn't given any extra support."

Keri Tochiki, a PhD student in the UCL Department of Cell and Developmental Biology and an in2scienceUK coordinator, says: "This is a fantastic programme that gives these students opportunities and experiences in the lab that they might not have had otherwise. In addition to feeling like I am making a difference, it really is a lot of fun for me too."