Iron in the Earth's core weakens before melting

The iron in the Earth's inner core weakens dramatically before it melts, explaining the unusual properties that exist in the moon-sized solid centre of our planet that have, up until now, been difficult to understand. 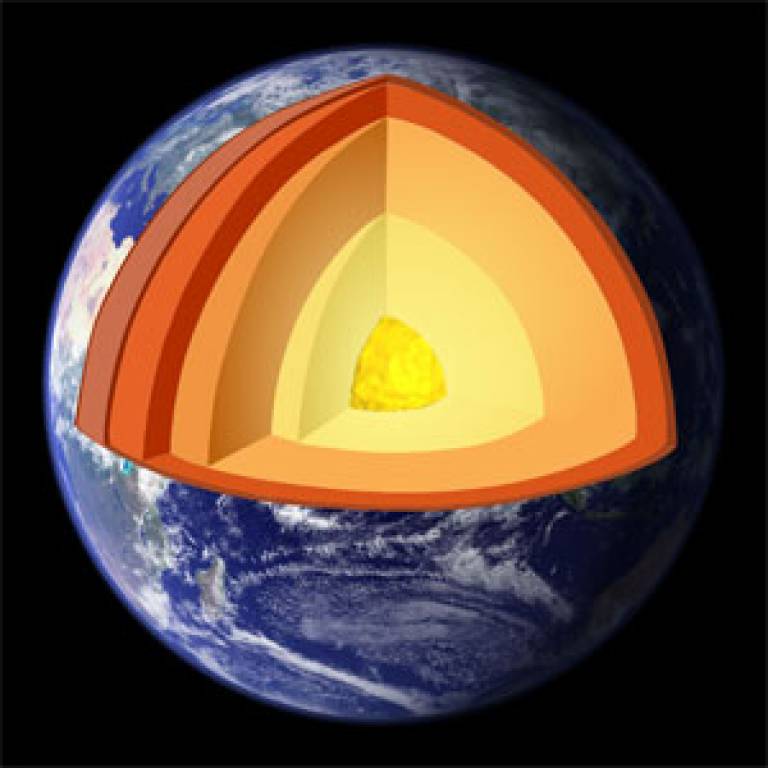 Scientists use seismic waves - pulses of energy generated during earthquakes - to measure what is happening in the Earth's inner core, which at 6000 km beneath our feet is completely inaccessible.

Problematically for researchers, the results of seismic measurements consistently show that these waves move through the Earth's solid inner core at much slower speeds than predicted by experiments and simulations.

Specifically, a type of seismic wave called a 'shear wave' moves particularly slowly through the Earth's core relative to the speed expected for the material - mainly iron - from which the core is made. Shear waves move through the body of the object in a transverse motion - like waves in a rope, as opposed to waves moving through a slinky spring.

Now, in a paper published in Science Express, scientists from UCL have proposed a possible explanation. They suggest that the iron in the Earth's core may weaken dramatically just before melting, becoming much less stiff. The team used quantum mechanical calculations to evaluate the wave velocities of solid iron at inner-core pressure up to melting.

The proposed mineral models for the inner core have always shown a faster wave speed than that observed in seismic data. This mismatch has given rise to several complex theories about the state and evolution of the Earth's core.

They calculated that at temperatures up to 95% of what is needed to melt iron in the Earth's inner core, the speed of the seismic waves moving through the inner core decreases linearly but, after 95%, it drops dramatically.

At about 99% of the melting temperature of iron, the team's calculated velocities agree with seismic data for the Earth's inner core. Since independent geophysical results suggest that the inner core is likely to be at 99-100% of its melting temperature, the results presented in this paper give a compelling explanation as to why the seismic wave velocities are lower than those predicted previously.

Professor Lidunka Vočadlo, from the UCL department of Earth Sciences and an author of the paper said: "The Earth's deep interior still holds many mysteries that scientists are trying to unravel.

"The proposed mineral models for the inner core have always shown a faster wave speed than that observed in seismic data. This mismatch has given rise to several complex theories about the state and evolution of the Earth's core."

The authors stress that this is not the end of the story as other factors need to be taken into account before a definitive core model can be made. As well as iron, the core contains nickel and light elements, such as silicon and sulphur.

Professor Vočadlo said: "The strong pre-melting effects in iron shown in our paper are an exciting new development in understanding the Earth's inner core. We are currently working on how this result is affected by the presence of other elements, and we may soon be in a position to produce a simple model for the inner core that is consistent with seismic and other geophysical measurements. "