This week saw the most ambitious test yet of the European Space Agency's ExoMars Rover, when - remotely controlled by scientists in the UK - it explored the Atacama Desert in South America. 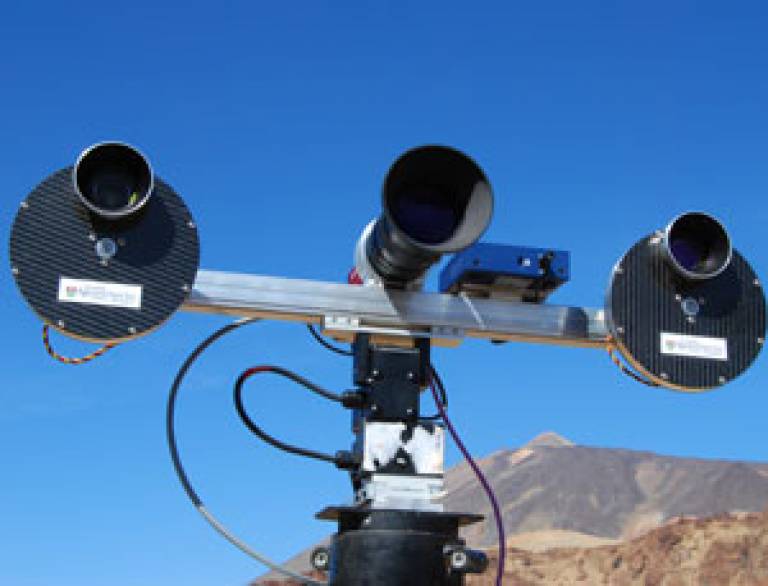 The panoramic camera onboard ExoMars, called PanCam, is led by scientists at the UCL Mullard Space Science Laboratory (MSSL) and provides stereo and high resolution imagery of the terrain around the Rover.

This week, at the Sample Acquisition Field Experiment with a Rover (SAFER) field trial, the PanCam team had the chance to test their instrument in the desolate Atacama Desert in northern Chile, which is one of the closest terrestrial matches for Mars.

An early ExoMars prototype rover called Bridget, which has been provided by UK company Astrium, is being used for the trial.

During the test, Dr Andrew Griffiths and Professor Andrew Coates from UCL MSSL, along with Aberystwyth PanCam team members, have been in the ExoMars remote control centre based at the Satellite Applications Catapult facility in Harwell, UK. The PanCam team is an international one, involving Germany, Switzerland, Austria and the UK.

One of the most important elements of the week has been to work with some of the other 'context' instruments - the close up imager and the ground penetrating radar (WISDOM). Working with other teams, and the rover team, has been vital during this test, as it will be in the real mission.

PanCam has been designed to search for contextual information on rocks that can give clues to the presence of organisms on Mars. PanCam can also capture other information at different wavelengths to give spectra and scales to give texture, that will help in revealing the geological characteristics of the Martian environment.

The trials have shown us again in practice what we already knew in theory - that the PanCam images and panoramas have truly set the context for the whole mission, exactly as they will on Mars. It's exciting to think that PanCam sets the geological context for ExoMars and we can't wait to get to Mars to examine the third dimension - under the surface- for the first time.

Professor Andrew Coates (UCL Mullard Space Science Labortory), PanCam prinicipal investigator, said: "It's been very interesting this week to be present at the rover control centre, testing the PanCam emulator remotely, defining sequences, analysing the images, and using the data to help make team decisions about future targets. This has been very useful experience to develop techniques for the real mission."

He added: "The trials have shown us again in practice what we already knew in theory - that the PanCam images and panoramas have truly set the context for the whole mission, exactly as they will on Mars. It's exciting to think that PanCam sets the geological context for ExoMars and we can't wait to get to Mars to examine the third dimension - under the surface- for the first time."

On Tuesday morning a trio of prototype instruments was fitted to the rover to be used in combination for navigation, sample acquisition and analysis. The panoramic camera provides stereo 3D terrain imagery, the close-up camera is like a geologist's hand-lens for high-resolution imaging, and the radar peers through rock and soil for a detailed 3D view of the shallow subsurface beneath the rover.

On Monday evening, before the rover had been deployed in the field, panoramic images were sent to the control centre. Looking at them along with a digital elevation map, the remote control team had to make their first decision on the path to be taken by the rover the following day.

Dr Andrew Griffiths (UCL Mullard Space Science Laboratory), PanCam instrument scientist, who has been supporting the tests all week, said: "It's been a challenge to stitch together panoramas and get the colours right in a timely manner, working both on site and with Austrian colleagues for digital elevation models.

"This week has been an invaluable experience which we can learn from for the real mission."

Image (above): AU PanCam Emulator (AUPE) as deployed in the volcanic caldera on Tenerife