Inspired by how dolphins hunt with bubble nets, engineers at UCL, the University of Southampton and Cobham Technical Services, have developed a new kind of radar that can detect hidden surveillance equipment and explosives. 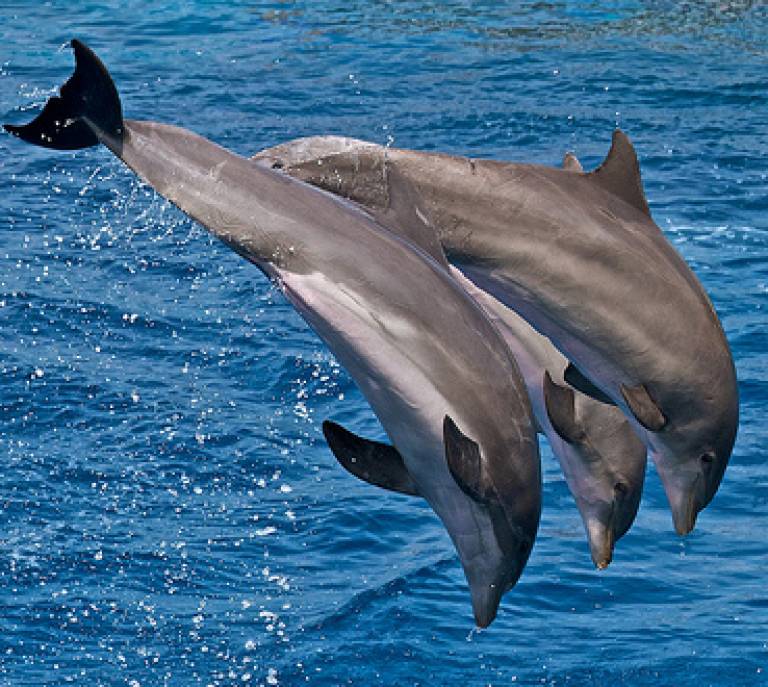 The twin inverted pulse radar (TWIPR) is able to distinguish true 'targets', such as certain types of electronic circuits that may be used in explosive or espionage devices, from 'clutter' (other metallic items like pipes, drinks cans, nails for example) that may be mistaken for a genuine target by traditional radar and metal detectors.

The new system is based on a sonar concept called twin inverted pulse sonar (TWIPS). TWIPS mimics the natural abilities of dolphins to process their sonar signals to distinguish between targets and clutter in bubbly water. The technique uses a signal consisting of two pulses in quick succession, one identical to the other but phase inverted.

A team at the University of Southampton showed that TWIPS could enhance linear scatter from the target, while simultaneously suppressing nonlinear scattering from oceanic bubbles. Some dolphins blow bubble nets to hunt fish and their sonar would not work if they could not distinguish the fish from the bubbles.

Next, they proposed that the TWIPS method could be applied to electromagnetic waves and that the same technique would work with radar. By teaming up with Professor Hugh Griffiths and Dr Kenneth Tong of UCL as well as Cobham Technical Services, they were able to apply TWIPR radar pulses to a 'target' (a dipole antenna with a diode across its feedpoint - typical of circuitry in devices associated with covert communications, espionage or explosives) to distinguish it from 'clutter' (represented by an aluminium plate and a rusty bench clamp).

This technique provides a very sensitive way of distinguishing between linear and nonlinear scatterers. It can provide a really neat means of detecting certain kinds of nonlinear targets, such as electronic devices, against a background of clutter, which behaves linearly.

In the test, the tiny target showed up 100,000 times more powerfully than the clutter signal from an aluminium plate measuring 34 cm by 40 cm. The study is published in the journal Proceedings of the Royal Society A.

Professor Hugh Griffiths (UCL Electronic and Electrical Engineering) said: "This technique provides a very sensitive way of distinguishing between linear and nonlinear scatterers. It can provide a really neat means of detecting certain kinds of nonlinear targets, such as electronic devices, against a background of clutter, which behaves linearly."

Given that the diode target measured 6 cm in length, weighed 2.8 g, costs less than one Euro and requires no batteries, it allows the manufacture of small, lightweight and inexpensive location and identification tags for animals, infrastructure (pipelines, conduits for example) and for humans entering hazardous areas, particularly where they might be underground or buried. These tags can easily be tuned to scatter-specific resonances to provide a unique identifier to a TWIPR pulse, what Professor Leighton calls 'the TWIPR fingerprint'.

Buried catastrophe victims not carrying such tags might still be located by TWIPR, as it can carry the bandwidth to search for mobile phone resonances, offering the possibility of locating victims from their mobile phones, even when the phones are turned off or the batteries have no charge remaining.