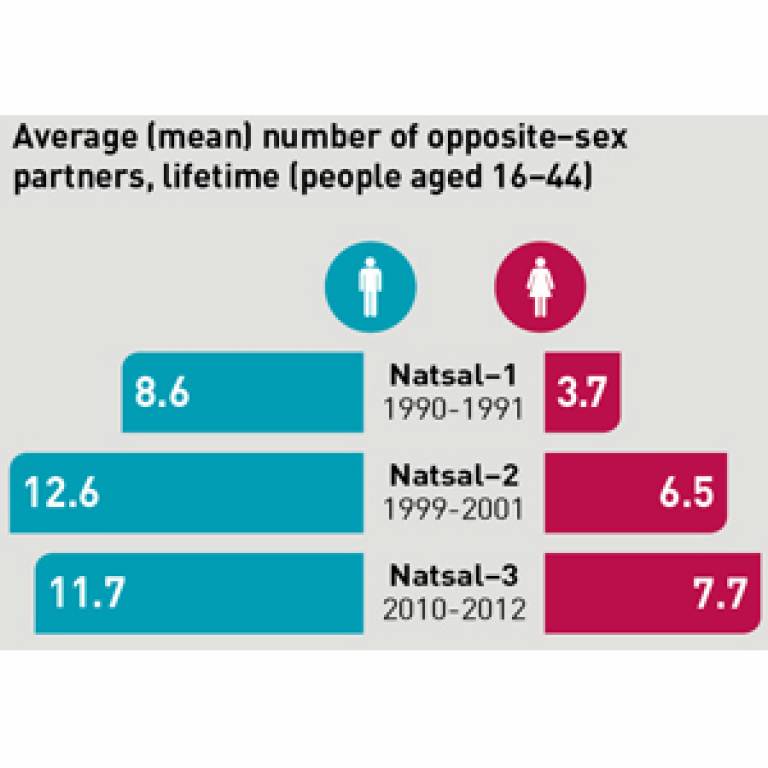 thelancet.com/themed/natsal" target="_blank">The Lancet give the most detailed picture yet of the British population's sex lives over the last 10 years, as part of the third National Survey of Sexual Attitudes and Lifestyles (Natsal) survey.

Led by UCL in partnership with the London School of Hygiene & Tropical Medicine and NatCen Social Research, over 15,000 adults aged 16-74 participated in interviews between September 2010 and August 2012.

Watch a video explaining some of the key findings

Studying this large representative sample of people living in Britain allowed the researchers to produce key estimates on patterns of sexual behaviour, attitudes, health, and wellbeing across the population.

Two previous Natsal surveys have taken place, in 1990 and 2000, making it one of the biggest and most comprehensive studies of sexual behaviour undertaken in a single country.

The results from the latest survey take into account for the first time the views and experiences of older individuals up to the age of 74 and show that many people remain sexually active well into later life. Results from the survey show that different aspects of sexual health affect people at different times throughout their lives, and that sexual health is an important component of our overall health and wellbeing. They also reveal how sexual attitudes and lifestyles have changed in the last sixty years.

We now have a much greater understanding of the role that sex plays over the course of a person's lifetime. This new information will help to guide the sexual health and education services that people may need at different stages of their lives.

Study Principal Investigator Professor Dame Anne Johnson (UCL Infection & Population Health) said: "By taking a robust scientific approach to assessing the sexual health and lifestyles of people from across Britain in 2010, and in previous Natsal surveys, we now have a much greater understanding of the role that sex plays over the course of a person's lifetime. This new information will help to guide the sexual health and education services that people may need at different stages of their lives. Although our results show that we are improving the uptake of some services, there are other areas where people may need more support and advice on health and sexual problems.

"Positive sexual experiences are related to health and well being throughout the life course, and it's time for this to be given wider recognition by health workers, educators, and society as a whole. We need to do more to create an environment in which it is easier for people to discuss sexual well-being as an integral part of the conversation we have with people about our health."

Professor Kaye Wellings, of the London School of Hygiene & Tropical Medicine, who co-led the study commented: "The Natsal studies, along with others, reveal major changes in sexual behaviour over the last century, including earlier onset of sexual activity, increasing numbers of older people who are sexually active, a closing of the gap between men and women, and weakened links between sex and reproduction.

"These changes now need to be reflected in research, clinical practice, and education. We need to start thinking about sex differently - sexual health is not merely the absence of disease, but the ability to have pleasurable and safe sexual experiences, free from coercion. Improving the quality of peoples' sexual experiences and their relationships will not just improve the effectiveness of sexual health programmes, but is also something that is important in its own right."

There are six papers and a framing paper published in the special issue of the The Lancet. A summary of the headline findings for each paper can be found below (click on paper titles for links to individual press releases).

1. Changes in sexual attitudes and lifestyles in Britain through the life course and over time (link)
• Biggest changes in behaviour seen amongst women
• People have sex at an early age and continue into their 70s
• Average frequency of sex reported by men and women declines
• People are more accepting of same-sex relationships, but less tolerant of married people having sex outside of marriage

2. Prevalence, risk factors, and uptake of interventions for sexually transmitted infections in Britain (link)
• Chlamydia and human papillomavirus (HPV) remain common and broadly distributed in sexually-active young adults in Britain, while HIV and gonorrhoea are restricted to those with known high risk factors.
• Uptake of chlamydia testing in young people is high, as is coverage of HPV catch-up immunisation, with lower rates of HPV 16/18 now being seen in young women.
• Substantial increases in sexual health service attendance and HIV testing, especially in those at highest risk, are welcomed, but continued efforts to maintain integrated services and encourage testing are needed.
• STIs persist both in those accessing and those not accessing services, and risky sexual behaviours remain the major drivers.

4. Sexual function in Britain (link)
• At least four out of ten men and women have had a recent sexual problem, but only one in ten are distressed or worried about their sex life
• Lack of interest in sex was one of the most commonly reported problems for both men and women, affecting three in every twenty (15%) men, and with women twice as likely as men to say that this had been an issue in the last year.