Wave of blue fluorescence reveals pathway of death in worms

The final biological events in the life of a worm have been described by scientists at UCL, revealing how death spreads like a wave from cell to cell until the whole organism is dead. 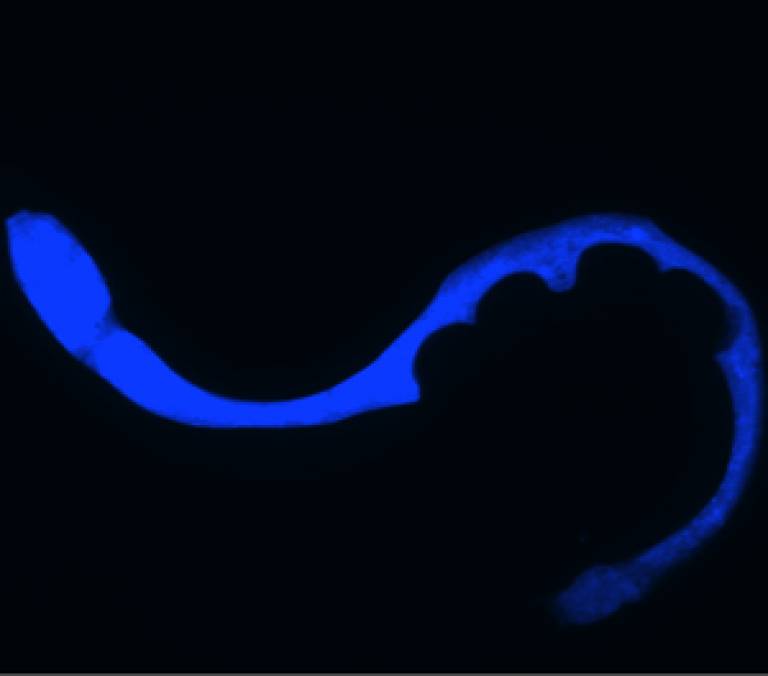 When individual cells die, it triggers a chemical chain reaction that leads to the breakdown of cell components and a build-up of molecular debris. The molecular mechanisms of this are reasonably well understood at a cellular level but we know much less about how death spreads throughout an organism at the end of its life.

In worms, the spread of death can be seen easily under a microscope as a wave of blue fluorescence travelling through the gut of the worm.  The study, led by researchers funded by the Wellcome Trust and BBSRC, reveals that this fluorescence is caused by a cell death pathway called necrosis and its spread throughout the organism is dependent on calcium signalling.

Professor David Gems from the (UCL Institute of Health Ageing), who led the study, explains: "We've identified a chemical pathway of self-destruction that propagates cell death in worms, which we see as this glowing blue fluorescence travelling through the body. It's like a blue grim reaper, tracking death as it spreads throughout the organism until all life is extinguished.

We've identified a chemical pathway of self-destruction that propagates cell death in worms, which we see as this glowing blue fluorescence travelling through the body. It's like a blue grim reaper, tracking death as it spreads throughout the organism until all life is extinguished.

"We found that when we blocked this pathway, we could delay death induced by a stress such as infection, but we couldn't slow death from old-age. This suggests that ageing causes death by a number of processes acting in parallel."

The mechanisms involved are similar to those that are active in mammals, confirming that the worm can provide a useful model to understand cell death in people.

The study, published online today in PLoS Biology, also links the mechanisms of cell death to the appearance of the blue fluorescence.

The source of the blue fluorescence was previously thought to be a substance called lipofuscin, which emits light of a similar colour and has been linked to ageing because it accumulates with increasing molecular damage. However, the new findings implicate another molecule called anthranilic acid as the source of the blue hue and show that lipofuscin is not involved.

"Together, the findings cast doubt on the theory that ageing is simply a consequence of an accumulation of molecular damage. We need to focus on the biological events that occur during ageing and death to properly understand how we might be able to interrupt these processes," added Professor Gems.