This week the spotlight is on Professor Joe Cain, Head of the Department of Science &amp; Technology Studies. 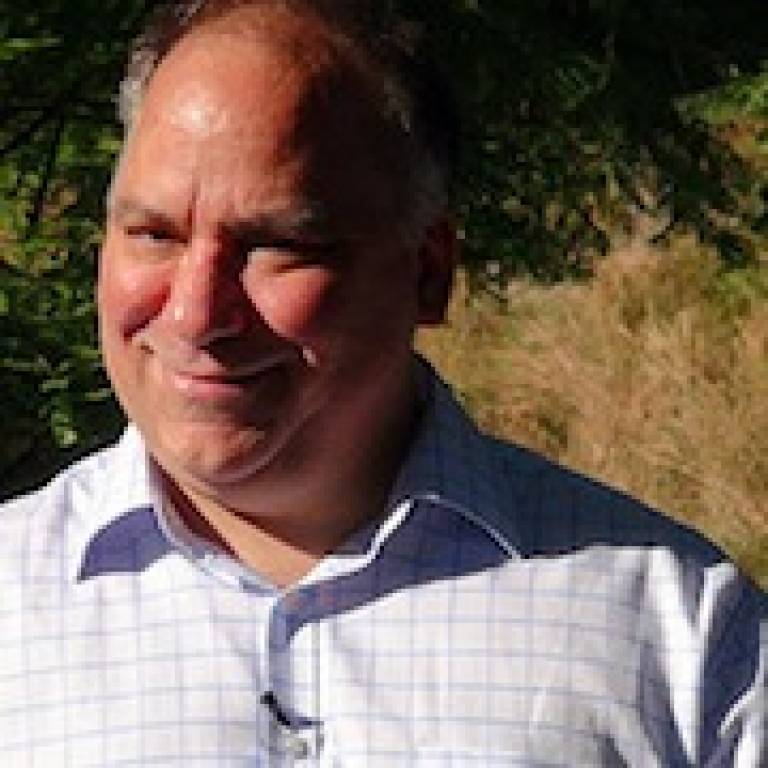 I'm Head of Department for the UCL Department of Science & Technology Studies (STS).

As a department, STS combines history and philosophy of science with science communication, science policy, and the sociology of contemporary science. This covers an enormous ground. We're a staff of about 20, and we have activities heading out in all directions.

Keeping up with everyone is exhausting, but most mornings I can't wait for the day to start. It's really true that UCL has some of the smartest, most creative people in the world. I get to work with them. I follow all their work. I see them when they shine.

The most exciting part of my role as Head involves facilitation. It's great to be in the room when an idea comes to life, then see a way to help it grow.

I arrived in 1996 following a postdoc at the University of Oklahoma. I vividly remember arriving at Heathrow, stepping up to passport control with my letter of appointment. "I'm here to work at UCL," I told them. "Thunk," went the rubber stamp on my passport. I got a smile: "My daughter just graduated from UCL. Welcome to the United Kingdom." I think that was the best possible start.

Research-wise, I revel in the nitty-gritty of detailed archive work: locating that smoking gun in correspondence which completed footnote 103, or understanding how that newly discovered document brings the whole puzzle together.

I recently discovered one new fact about Darwin that relates to the history of baptisms in their family: when, where, who was involved. This led to corrections in the Oxford Dictionary of National Biography. It also told a story about Emma Darwin and how her ties to family and home changed during her life in London. Every time I tell her story, it resonates with migrants (like me) who have changed what they think about "home" and "here".

Teaching-wise, I've been lucky enough to receive a few teaching awards over my career. It was a massive boost to have my faculty tutor once stop me in the cloisters to complain, "Your students are driving me crazy with all those letters of support!" I think one of them had organised a campaign, and it was unbelievably touching to know how many had pitched in.

Everything-else-wise, it just has to be the film nights we run with the Grant Museum of Zoology. The team in the museum deserve every bit of the praise they receive. Years ago, together we started showing classic films in natural history as an engagement project. It's evolved into one of the high points of my calendar. That's down to the audience. We have a group of regulars who bubble over with excitement for the films. We always have new people, who have stumbled across the advertising and decided to give it go.

We also have lots of UCL staff coming for a bit of light-hearted thinking about films. I always learn something new. The series has developed a certain chemistry that suggests we've stumbled across deeply rooted engagement. Our particular model has since been copied across the university, across London, and across the UK. That's great.

Save the Crystal Palace Dinosaurs!

I'm passionate about those sculptures, and risk becoming the dinner party bore when the subject comes up. They were built by Benjamin Waterhouse Hawkins for the re-opening of the Crystal Palace in 1854 in south London.

The statues are a unique snapshot for the history of British palaeontology. They are also a platform for studying various bits of London's social history, history of sculpture, materials engineering, and much more.

But the statues are at risk. Our recent cold winters have been tough on the old materials. Plus, regular decay. Plus, staff cuts in the park mean the rangers struggle to keep a good eye on things, and vandals frequently visit the park. If something isn't done soon to bring in real conservation, these 160-year old, Grade 2* national treasures are going to collapse.

We just can't sit by and do nothing. While researching more and more into the intellectual and social history of these statues, I'm now getting involved with fundraising for conservation work. The park and the dinosaurs enjoy enormous community support, and we're going to engage here to get results.

(Hats off to Professor Peter Doyle (UCL Earth Sciences), who did important work on the subject in the 1990s in the last major wave of conservation work. I walk in his footsteps here.)

Films: Goodness. I watch every film suggested by the audience for the film nights at the Grant Museum, so I see a lot of films. The one that surprised me most was Creature from the Black Lagoon.

I thought it was going to be 1950s Hollywood monster rubbish, but some of the scenes are extraordinarily beautiful. We showed this just after I happened to visit Wakula Springs in Florida, where the "lagoon" scenes were filmed, so the sounds and smells of the lagoon were fresh.

Novel: For work, my favourite is Arthur Conan Doyle's The Lost World. It's rich with Darwinian themes. For the rest, every summer after Term 3 ends, I ritually crack open John Milton's Paradise Lost. (I know, it's really a poem.) This is tough going for me, and I know it's first year stuff in UCL English. I can't say I've understood its profundity, but immersing myself in it helps me mark the transition into my summer of research. One of my friends summed it up brilliantly. "That Satan. He wasn't a nice guy, was he?"

Album: One of the most evocative for me is Aaron Copland's Rodeo. Think American cowboy racing over western landscapes. Big skies. Wide vistas. Hats waving. Yee-haw.

In the 1920s, a New Zealand taxonomist got fed up with an American museum's boasting about its great discoveries in the Gobi desert. To satirise them, he took the ornament off the bonnet of a car, pretended it was a new fossil discovery, and published a monograph about it.

That publication looks like any old work in taxonomy. Skim it and you might never notice that this joke satirises the Americans with savage intensity. It's a famous inside joke in ornithology; sometimes, a test for students.

I want to eat soup with Rosalind Franklin. So much has been written about her in relation to Watson, Crick and DNA. But that story has distorted almost everything people have to say about her. Each year, we use her biography as a case study to think about history, evidence, and advocacy. But she died young and left few traces of her life. Biographers ever since have really struggled to find much to work with. I'd like to talk with her about her life, and I'd like to hear how she understood the people and projects around her.

If she turned me down, I'd invite Kathleen Lonsdale, plus the PhD students in STS. If you don't know who Lonsdale was, or why she went to jail during WWII, or why UCL named a building after her, look her up. I want to talk with her about scientists and social responsibility. And I want our PhD students to meet someone worth knowing more about.

If both turned me down, I'd beg for an invite to the famous dinner in the Iguanodon in Crystal Palace on New Year's Eve at the end of 1853. This would let me finally know precisely how many people fit inside that dinosaur.

"Read it now, think about it while you have the time. You'll never get the chance to 'look it up' in that conversation you're going to have."

I almost drowned in a shipwreck off the Galapagos Islands. Someone else did. For a moment, it was looking distinctly bad for me, too.

London. All of it. When I retire, I think I'm going to spend a lot of time riding the buses around this extraordinary city. Randomly choosing the routes. Watching things evolve. Stopping to engage whenever I felt like it. With such a busy job, it's hard sometimes to look up from the latest thing I need to read on the way to the office, and watch the city as I pass through.