A solar tsunami observed by NASA's Solar Dynamics Observatory (SDO) and the Japanese Hinode spacecraft has been used to provide the first accurate estimates of the Sun's magnetic field. 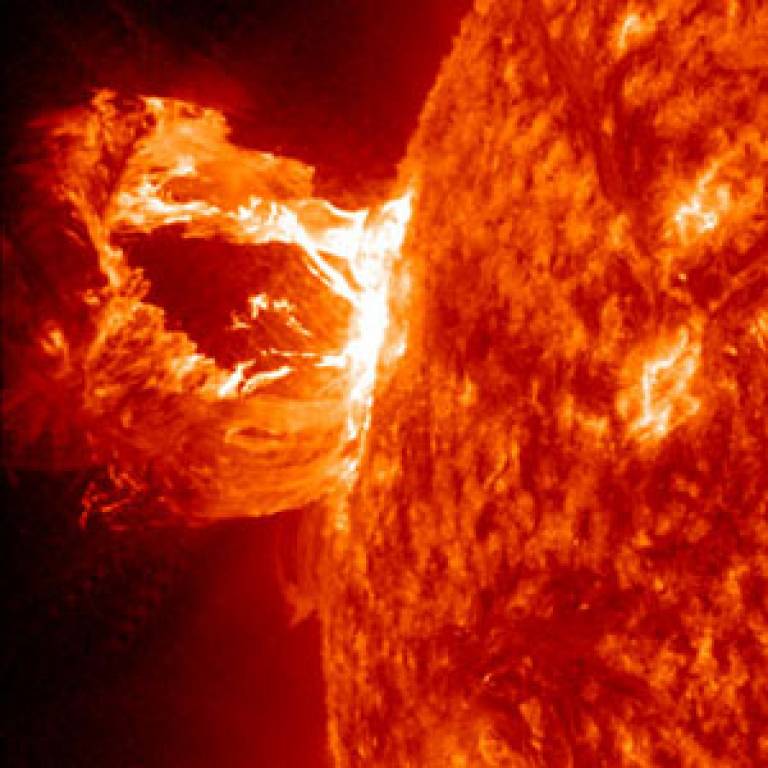 Solar tsunamis are produced by enormous explosions in the Sun's atmosphere called coronal mass ejections (CMEs). As the CME travels out into space, the tsunami travels across the Sun at speeds of up to 1000 kilometres per second.

Similar to tsunamis on Earth, the shape of solar tsunamis is changed by the environment through which they move. Just as sound travels faster in water than in air, solar tsunamis have a higher speed in regions of stronger magnetic field. This unique feature allowed the team, led by researchers from UCL's Mullard Space Science Laboratory, to measure the Sun's magnetic field. The results are outlined in a paper soon to be published in the journal Solar Physics.

Using data obtained using the Extreme ultraviolet Imaging Spectrometer (EIS), a UK-led instrument on the Japanese Hinode spacecraft, the team measured the density of the solar atmosphere through which the tsunami was travelling.

The combination of imaging and spectral observations provides a rare opportunity to examine the magnetic field which permeates the Sun's atmosphere.

Dr Long noted: "These are rare observations of a spectacular event that reveal some really interesting details about our nearest star."

Visible as loops and other structures in the Sun's atmosphere, the Sun's magnetic field is difficult to measure directly and usually has to be estimated using intensive computer simulations. The Hinode spacecraft has three highly sensitive telescopes, which use visible, X-ray and ultraviolet light to examine both slow and rapid changes in the magnetic field.

The instruments on Hinode act like a microscope to track how the magnetic field around sunspots is generated, shapes itself, and then fades away. These results show just how sensitive these instruments can be, measuring magnetic fields that were previously thought too weak to detect.

The explosions that produce solar tsunamis can send CMEs hurtling towards the Earth. Although protected by its own magnetic field, the Earth is vulnerable to these solar storms as they can adversely affect satellites and technological infrastructure.

Dr Long said: "As our dependency on technology increases, understanding how these eruptions occur and travel will greatly assist in protecting against solar activity."

Image: An eruption on April 16, 2012 was captured here by NASA's Solar Dynamics Observatory in the 304 Angstrom wavelength, which is typically coloured in red. Credit: NASA/SDO/AIA