A breakthrough in our understanding of the properties of titania (titanium dioxide) - the basis of self-cleaning window technology - has been made by scientists at UCL, uncovering a decades old misunderstanding that has clouded our knowledge of how mixed phase [1] titania catalysts operate. 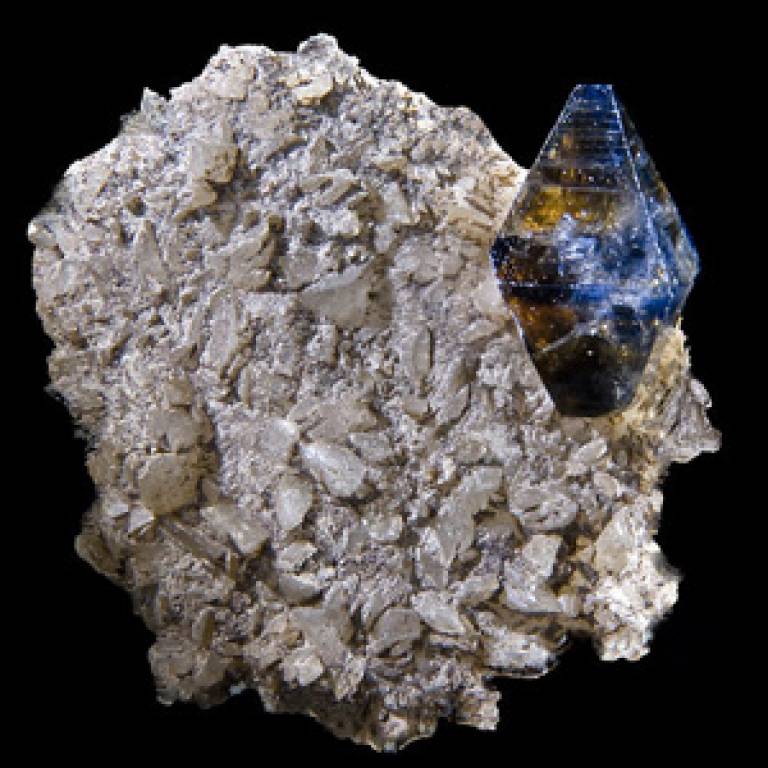 By carrying out cutting-edge computational simulations alongside precise experimental measurements of physical samples of the mineral, scientists at UCL found that the widely accepted explanation for how mixed phase titania catalysts operate was misguided. Their discovery, published today in Nature Materials, will help scientists and engineers develop improved photocatalysts, which have applications in clean energy technologies, self-cleaning coatings and a number of other fields.

Since the 1970s, scientists have known that titania is a photocatalyst, a substance which can break down water and other substances on its surface when it is exposed to light. This occurs when photons in the light excite electrons within the atomic structure. These electrons then react with the water molecules, splitting them apart releasing hydrogen, which can be used as a green fuel. The same phenomenon also degrades organic molecules such as oils and grease.

These properties, combined with the fact that titania is cheap and abundant, have made it a widely studied and widely used substance, and the basis of self-cleaning window technology.

"There were about 12,000 scientific articles written about titania last year," says lead author David Scanlon (UCL Chemistry), "so this is one of the most heavily studied catalysts out there. Despite the mountains of research into this material, the explanation for the observed performance increase when mixed-phase samples were employed instead of single phase materials had remained a mystery for decades."

Despite the mountains of research into this material, the explanation for the observed performance increase when mixed-phase samples were employed instead of single phase materials had remained a mystery for decades.

While titania's chemical formula is always the same - one titanium and two oxygen atoms - its molecules can be arranged in different ways, producing different crystal structures and properties.

The most common two forms in nature are called rutile and anatase. Both forms are able to split water in the presence of ultraviolet light (although anatase is much better than rutile), but when the two forms are combined into the same particle, there is a synergy between the two forms, leading to improved properties.

The reasons behind this property are rutile and anatase's band alignment (the relationship between the energy levels of electrons within the materials), but the precise nature of this has been the subject of much debate in chemistry, physics and materials science over the years.

A highly influential study by a Swiss team in 1996 seemed to have settled the question of why rutile-anatase mixtures are better at splitting water. That study concluded that the energy levels of the electrons in rutile were slightly lower than in anatase, and that the offset between the two could explain why mixed samples of anatase and rutile have properties so different from pure samples.

However a number of problems with the theory gradually became apparent, for instance many scientists noticed electrons flowing from rutile into anatase when using mixed samples of the two - the opposite of what should happen if rutile had lower energy levels than anatase. The UCL team therefore set out to investigate the phenomenon, making the most of the improved computing power available today and a new experimental technique.

The team used UCL's Legion Cluster supercomputing facility to perform state-of-the-art simulations of the properties of rutile and anatase, and discovered the exact opposite of what the 1996 study concluded: the offset was actually in the opposite direction, with anatase having the lower energy levels. This neatly explains the previously mysterious flow of electrons from rutile into anatase, and the oxygen sensitivity of rutile.

In parallel, experiments on physical samples of rutile-anatase particles carried out by Charles Dunnill (UCL Chemistry) came to the same conclusions as the computer simulations.

"The work explains a question that's been floating around without a good answer for nearly 40 years," Dunnill says. "For the first time we actually have believable results that explain the observed properties of titania in a coherent and convincing way."

Better understanding how titania breaks down water and other molecules has implications for the design of equipment for producing green fuels, as well as self-cleaning coatings for sterilisation.

The UCL-led team, which also includes researchers from the University of Bath, Trinity College Dublin and the STFC Daresbury Laboratory, published their results in the journal Nature Materials on 7 July.