Schools from in and around London are using over 6000 lemons in a day of frenzied lemonade selling that would rival The Apprentice. 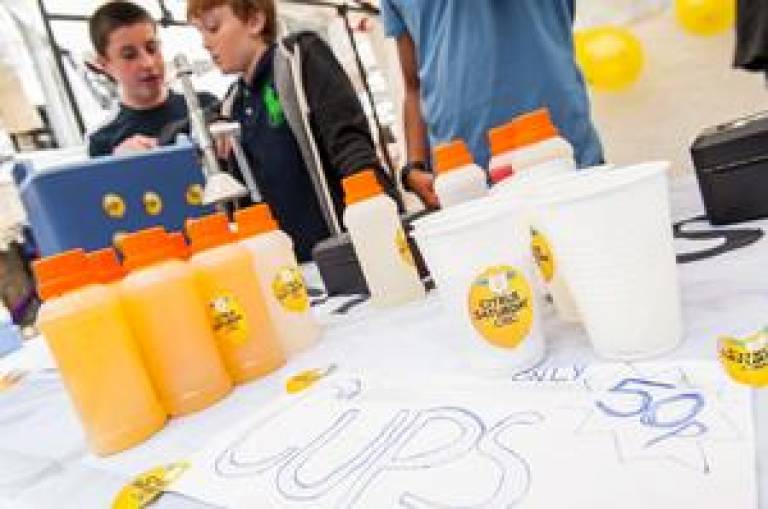 Citrus Saturday - an initiative set up by UCL to show young people what it's like being an entrepreneur - will see eager teens from 22 schools and youth groups across London, including South Camden Community School, the William Ellis School, the Capital City Academy and Regent High School set up 17 lemonade stands across London, from Euston to South Bank Food Market.

The stands across London have been generously provided by partners including Camden Council, the People's Supermarket, Euston and Paddington Stations, and Camden Lock Market.

The teams are being supervised by a group of staff and students from UCL who volunteered their time over 3 Saturdays to teach the teams taking part everything from basic business management to food hygiene in a series of workshops in the weeks preceding the day itself. Young people in Bedford and Dublin also took part in the initiative, making it truly international.

Each team ran their stall as closely to that of a small business as possible. They were provided with seed funding from UCL, from which they had to buy fruit and consumable for the day and after frenzied selling on Citrus Saturday itself, the participants are allowed to keep their profits.

The initiative is the brainchild of Timothy Barnes - the Director of UCL Advances - after he travelled to a business conference in the US and hearing of a similar approach being pioneered there to encourage young people to aspire to set up their own businesses. The programme is currently joint-funded by UCL and an EU Interreg 4b grant for northwest Europe.

Citrus Saturday seeks to emulate that approach through a fun, absorbing and - most importantly for the teenagers taking part - financially rewarding day of setting up a lemonade stand. The initiative - which is in its third year and which saw events take place in Edinburgh, Dublin and Somerset as it went nationwide, and across the Irish Sea, last year - is now expanding worldwide.

Already this year, events have been confirmed in Macau, Belgium and Mozambique, with further events in the planning stages for Germany and France.

Commenting on the success of this year's event in London, Jack Wratten, Citrus Saturday Manager, said:

"Ensuring Citrus Saturday is financially rewarding is the key to the whole concept of the event.

"The students quickly become invested in running the business successfully on the day and making as many sales as possible - and they become hugely enthusiastic about the process of running a business when they experience first-hand how enjoyable it can be."