An international team of researchers has discovered why people with a variation of the FTO gene that affects one in six of the population are 70 per cent more likely to become obese. 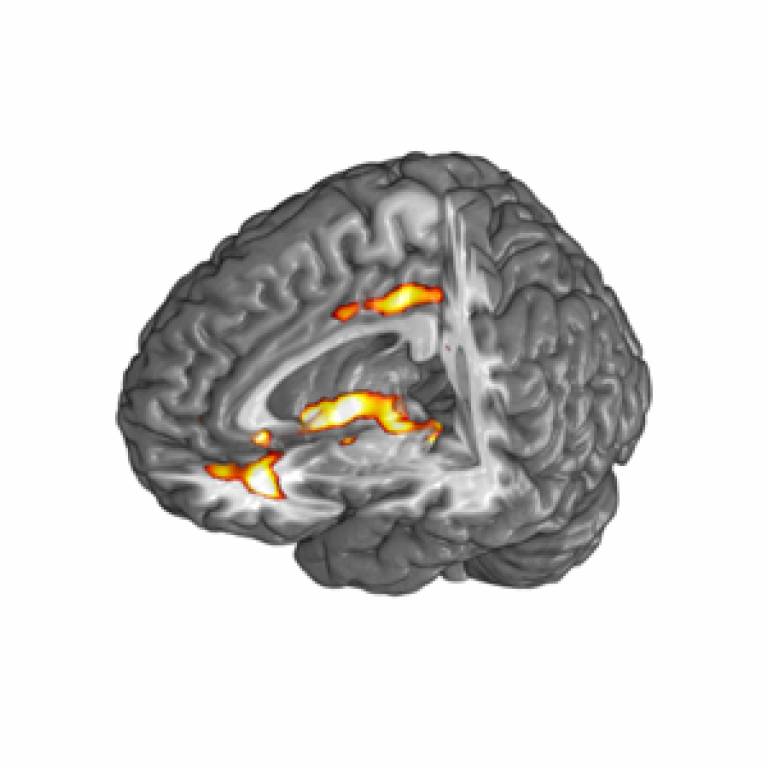 A new study led by scientists at UCL, the Medical Research Council (MRC) and King's College London Institute of Psychiatry shows that people with the obesity-risk FTO variant have higher circulating levels of the 'hunger hormone', ghrelin, in their blood. This means they start to feel hungry again soon after eating a meal.

Real-time brain imaging reveals that the FTO gene variation also changes the way the brain responds to ghrelin, and to images of food, in the regions linked with the control of eating and reward.

Together these findings explain for the first time why people with the obesity-risk variant of the FTO gene eat more and prefer higher calorie foods compared with those with the low-risk version, even before they become overweight. The research, funded by the MRC and the Rosetrees Trust, is published today in the Journal of Clinical Investigation.

Individuals with two copies of the obesity-risk FTO variant are biologically programmed to eat more. Not only do these people have higher ghrelin levels and therefore feel hungrier, their brains respond differently to ghrelin and to pictures of food - it's a double hit.

Previous studies have revealed that single 'letter' variations in the genetic code of the FTO gene are linked with an increased risk of obesity, and this behaviour is present even in preschool children.

They studied two groups of participants - those with two copies of the high obesity-risk FTO variant (AA group) and those with the low obesity-risk version (TT group). They matched the volunteers perfectly for body weight, fat distribution and social factors such as educational level to ensure that any differences they saw were linked to FTO, and not to other physical or psychological characteristics.

A group of 20 participants (10 AA and 10 TT) were asked to rate their hunger before and after a standard meal, while blood samples were taken to test levels of ghrelin - a hormone released by cells in the stomach that stimulates appetite.

Normally ghrelin levels rise before meals and fall after eating, but in this study men with the AA variation had much higher circulating ghrelin levels and felt hungrier after the meal than the TT group. This suggests that the obesity-risk variant (AA) group do not suppress ghrelin in a normal way after a meal.

The researchers then used functional magnetic resonance imaging (fMRI) in a different group of 24 participants to measure how the brain responds to pictures of high-calorie and low-calorie food images, and non-food items, before and after a meal. Again they took blood samples and asked the participants to rate on a scale how appealing the images were.

Individuals with the obesity-risk FTO variant rated pictures of high-calorie foods as more appealing after a meal than the low-risk group. In addition, the fMRI study results revealed that the brains of the two groups responded differently to food images (before and after a meal) and to circulating levels of ghrelin. The differences were most pronounced in the brain's reward regions (known to respond to alcohol and recreational drugs) and in the hypothalamus - a non-conscious part of the brain that controls appetite.

Finally, the scientists looked at mouse and human cells to uncover what causes increased ghrelin production at a molecular level. They over-expressed the FTO gene and found that this altered the chemical make-up of ghrelin mRNA (the template for the ghrelin protein) leading to higher levels of ghrelin itself. Blood cells taken from the obesity-risk group also had higher levels of FTO gene expression and more ghrelin mRNA than the low-risk group.

Dr Rachel Batterham from UCL and University College London Hospitals, who led the study, said: "We've known for a while that variations in the FTO gene are strongly linked with obesity, but until now we didn't know why. What this study shows us is that individuals with two copies of the obesity-risk FTO variant are biologically programmed to eat more. Not only do these people have higher ghrelin levels and therefore feel hungrier, their brains respond differently to ghrelin and to pictures of food - it's a double hit.

"At a therapeutic level this arms us with some important new insights to help in the fight against the obesity pandemic. For example, we know that ghrelin (and therefore hunger) can be reduced by exercise like running and cycling, or by eating a high-protein diet. There are also some drugs in the pipeline that suppress ghrelin, which might be particularly effective if they are targeted to patients with the obesity-risk variant of the FTO gene."

Professor David Lomas, Chair of the MRC's Population and Systems Medicine Board, said: ""Large scale population studies have done an excellent job at highlighting FTO as a key obesity gene. Here scientists have used an innovative combination of human studies and more basic biology to finally give us the 'smoking gun' linking FTO variations, hunger and weight gain.

"The brain imaging adds a fascinating insight into the role of the nervous system in obesity, which is becoming increasingly clear. This work will contribute to more targeted treatments and better outcomes for obese patients in the future."

Richard Ross, Chairman of the Rosetrees Trust, said: "Rosetrees is delighted to be able to support cutting-edge research carried out by outstanding researchers such as Dr Batterham, which has such a direct human impact. Rosetrees supports over 200 projects, helping researchers to make breakthroughs across all the major illnesses."

The research was led by UCL, Professor Dominic Withers in the MRC Clinical Sciences Centre at Imperial College London, and Dr Fernando Zelaya at King's College London Institute of Psychiatry in collaboration with a host of international partners.

Links:
Full paper in the Journal of Clinical Investigation (£)