Bentham's personal correspondence to be digitised for first time

Thousands of letters revealing a far more personal side of the British philosopher Jeremy Bentham and his family are set to be digitised as part of the UCL Transcribe Bentham project, uniting the entire collection of Bentham's manuscripts for the first time since his death in 1832. 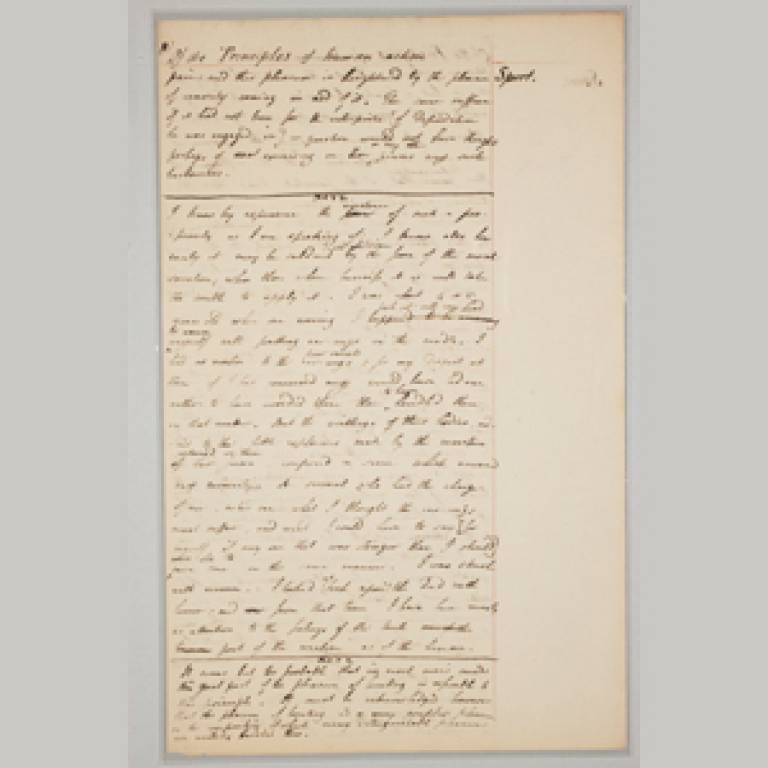 Currently residing at the British Library, the 12,500 manuscripts will join the 60,000 from UCL online, and include correspondence between Bentham's father and the head teacher of Jeremy's school in which he complains that some of the other boys have stolen Jeremy's books, painting an intimate picture of Bentham's personal life, family and intellectual circles.

One of the largest-scale examples of 'crowdsourcing' being used to further academic research in the world, the Transcribe Bentham project aims to bring further stories about the founding father of utilitarianism to light through the work of volunteers transcribing Bentham's manuscripts online, and thanks to funding from the Andrew W. Mellon Foundation, this is now closer to reality.

Other manuscript discoveries already made by volunteers include an episode from Bentham's childhood, in which he recalls setting fire to ear-wigs in a candle before being told off by one of his family's servants, and even a recipe for baked apple pudding for the inmates of the proposed Panopticon - his revolutionary prison design - in which Bentham itemised and costed all the ingredients, including the cost of labour in making each dish.

Dr Tim Causer, Research Associate at the UCL Bentham Project, said: "We're quite confident that the correspondence from the British Library will be quite a hit with the volunteers. It's always been a long-term dream of the Bentham Project to have digitised versions of both the UCL, and especially the BL manuscripts, which will make producing Bentham's Collected Works that little bit easier. Moreover, a reunited digital collection, made freely available to the public, will create an enormously important historical and philosophical resource."

Initially launched in 2010, Transcribe Bentham is a multi-award winning online tool designed to harness the effort of all Bentham fans - whether schoolchildren, history enthusiasts, retired academics or armchair philosophers - to bring his work into the digital age and make it accessible to the world at large. To date, volunteers have transcribed over 5,700 manuscripts, or some 2.8 million words.

Working in conjunction with the University of London Computer Centre, the team-also including UCL's Centre for Digital Humanities, Library Services, and Creative Media Services-have also updated the Transcribe Bentham site, implementing a number of changes and improvements to the online tool which will make it even easier for volunteers transcribe the manuscripts and reveal their secrets.

Dr Causer said: "Despite us having digitised 16% of the Bentham's manuscripts many are still untranscribed and unstudied, and in many instances, Transcribe Bentham volunteers are often the first people to read the manuscripts since Bentham wrote them. Their contents could potentially be of immense intellectual importance.

"But Transcribe Bentham is not only an academic endeavour; we are hoping through this project to promote Bentham's legacy to the public, and the volunteers' efforts, like Bentham's writings, will be preserved for posterity, as the transcriptions will ultimately form the basis of new, printed editions of Bentham's works and a fully searchable online database for use by scholars in generations to come."