€6 million for research in to foetal growth restriction

UCL researchers in a successful academic-industrial collaboration have been awarded an EU Framework Programme 7 Grant of almost €6 million to develop a therapy for foetal growth restriction. 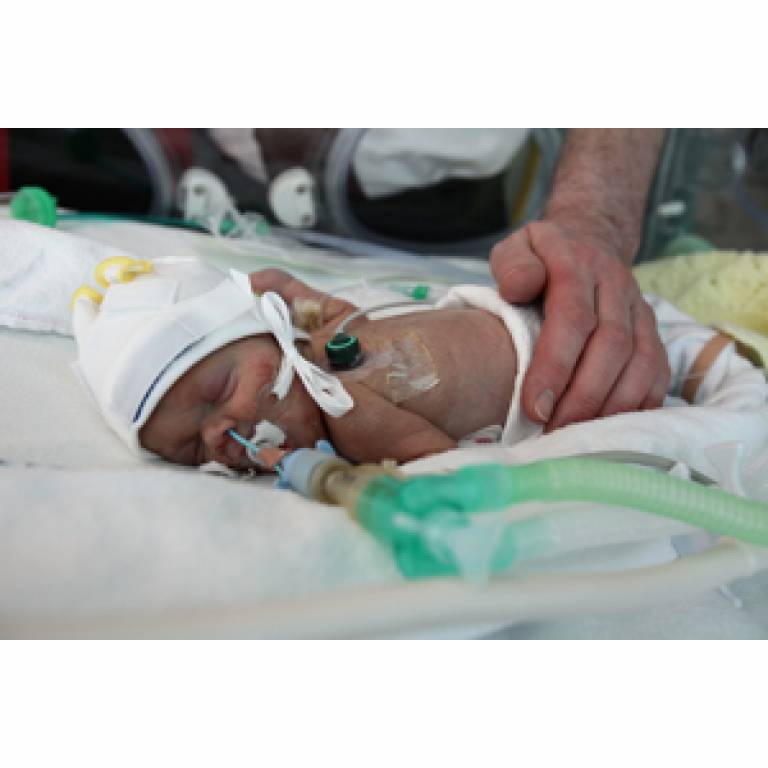 The funding has been awarded to the EVERREST* consortium of seven leading EU higher education institutions, led by UCL. The main industrial collaborator engaged in the research is Ark Therapeutics Group plc, London, UK, a contract development and manufacturing organisation with specialist expertise and facilities for the development of viral based products.

The consortium is developing a therapy for foetal growth restriction, a major problem of pregnancy affecting up to eight per cent of all pregnancies. The condition is severe in approximately 1 in 500 foetuses and affected foetuses are extremely small, usually less than 500g.

Babies born from growth restricted pregnancies are not only at increased risk of perinatal death and complications such as cerebral palsy, but there are long term consequences for their health which include diabetes and cardiovascular disease.

The recent improvements in the postnatal care of premature growth restricted babies means that more of them survive delivery, but at great cost. Inadequate uterine blood flow, termed 'utero-placental insufficiency', is the underlying abnormality in many cases.

Currently there is no therapy available.

Once severe early onset foetal growth restriction is identified in mid pregnancy, couples currently face a stark choice between delivering their baby very prematurely in the knowledge that they might die in the neonatal intensive care unit, or allowing the pregnancy to continue with the strong likelihood that the baby will die in the womb.

If successful, this would be the first evidence based therapy for fetal growth restriction and could save thousands of lives.

Studies performed over the last six years by researchers at the UCL Institute for Women's Health and UCL Department of Cardiovascular Medicine, with Ark Therapeutics, identified that maternal blood flow to the placenta could be increased in normal pregnancies by delivering a gene medicine containing the Vascular Endothelial Growth Factor (VEGF) to the uterine arteries. In growth restricted pregnancies the gene medicine safely increased foetal growth and birthweight.

What is most promising is that relatively small increases in foetal growth and gestational age at delivery are associated with major improvements in survival and morbidity.

For example, as each day of pregnancy advances between 24 and 27 weeks of gestation, there is a two per cent improvement in survival after birth. Between 23 and 26 weeks of gestation, an increase in birthweight of 100g reduces the risk of dying by 40 per cent.

The new grant supports the EVERREST consortium's involvement in a six year research programme that will culminate in a first-in-woman phase I/IIa safety/efficacy trial. The final pre-clinical toxicology studies will be concluded by UCL and University of East Finland.

A leading bioethicist from Queen Mary University of London will engage with stakeholder groups and patients affected by foetal growth restriction to evaluate the ethical and social acceptability of the proposed EVERREST trial.

For the trial, the consortium includes some of the leading foetal medicine centres and academic health science centres in Sweden (Lund University), Germany (University Medical Center Hamburg-Eppendorf), Spain (Hospital Clinic Barcelona and IDIBAPS) and the UK (UCL and UCLH) with strong backgrounds in the management of pregnancies affected by severe early onset foetal growth restriction.

Women from these centres who present with an affected pregnancy in mid-gestation will be invited to participate in the trial, and the safety and efficacy of the intervention will be studied. The consortium will be managed by Euram, a leading UK based research application and management company.

Dr Anna David, Reader/Associate Professor at UCL Institute for Women's Health and the coordinator of the EVERREST consortium said: "This award will enable the development of a highly innovative new therapy in the field of obstetrics, a specialty in which there is currently a lack of investment in new treatments. If successful, this would be the first evidence based therapy for foetal growth restriction and could save thousands of lives."

Foetal growth restriction affects approximately 60,000 babies per year in Europe and the USA. Many of these premature, very small babies stay in hospital for months after birth, which is stressful for parents and very costly for the NHS (neonatal intensive care costs approximately £1,000 per day). Potential benefits from the research could include reduced stillbirths and neonatal deaths, and improved outcome in pregnancies affected by severe early onset foetal growth restriction.

This project is partially funded by the European Commission under the 7th Framework Programme.