On Thursday 19 December at 09:12 GMT, a satellite designed to unlock the secrets of the birth and evolution of the Milky Way Galaxy will be launched by the European Space Agency. 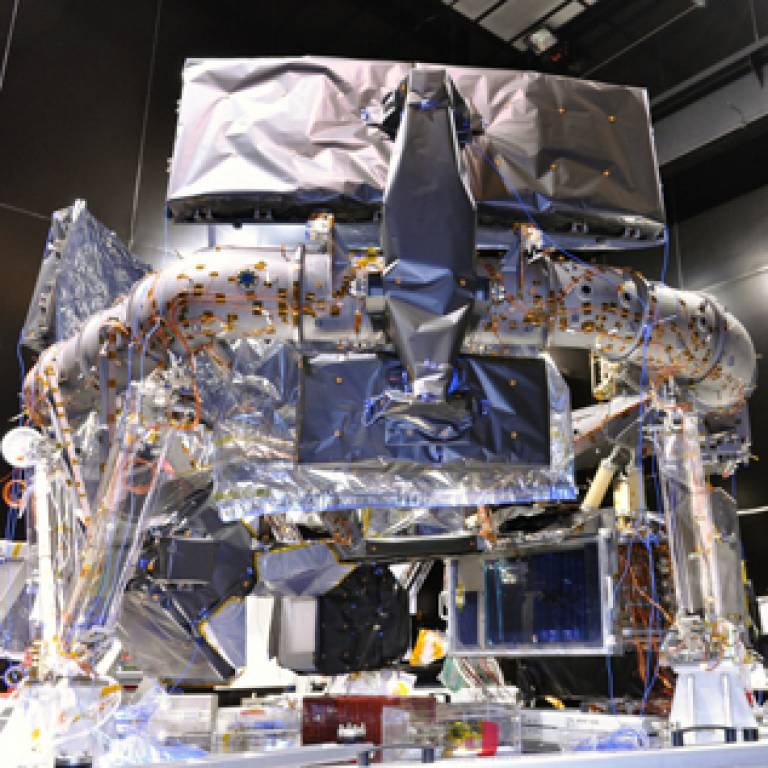 UCL's Mullard Space Science Laboratory has played a major part in the satellite - named Gaia - for 12 years, developing the instrument that will measure the speed, temperature, size and age of over a billion stars in our galaxy.

Gaia's mission is to slowly scan the sky, rotating every six hours, and survey the whole sky some hundred times in its six year mission. It has two extraordinarily stable telescopes, each focussing on the same huge array of 106 electronic detectors, the biggest ever either launched into orbit or on any Earth-based telescope.

The angles between the stars from each telescope will be measured precisely, and with more than a billion stars, the whole mesh of angles can be number-crunched to calculate the position of each star a thousand times more accurately than currently possible.

Professor Mark Cropper, from the Mullard Space Science Laboratory, who has worked on Gaia from its inception, said: "This is an astonishing step up in accuracy. To give an example, Gaia will measure the difference in position of one side of a human hair compared to the other side of it - in Paris, as viewed from London."

Over time the stars are viewed from different positions as Gaia orbits around the Sun. This changing view creates an apparent motion of the stars closest to us in the sky. These tiny movements can be measured and used to work out the distance to the star, using the same principle we use with two eyes: each eye sees a foreground object in a slightly different position against the background. Our brains use this difference to give sense of depth and distance.

This is an astonishing step up in accuracy. To give an example, Gaia will measure the difference in position of one side of a human hair compared to the other side of it - in Paris, as viewed from London.

We don't have two Gaias, but as the satellite goes around the Sun every year, it sweeps through an orbit some 190 million miles in diameter, and from measurements of the slightly different scenes six months apart, the distances to the stars can be calculated in the same way. Gaia will also be able to distinguish these apparent motions from real motions of the stars across the sky.

However, with measurements of the stars only across the sky, there is one piece of information missing: their speed towards and away from us - and that information is provided by the Radial Velocity Spectrometer on Gaia. This is the instrument in which UCL has had a major role. Not only does the Spectrometer provide this speed, but it also tells us about the temperature of each star, its size and whether it is a first generation or much later generation of star - its age.

Professor Cropper explained: "If we know the positions of all of the stars, we can map the Milky Way. And if we know their movements, we can work out the forces on the stars. Because gravity is the main force controlling stellar movement, and its strength and direction depends on the location of matter, including mysterious dark matter, we can weigh the Milky Way and work out where all the mass is. This controls the entire shape of the Milky Way to make it look as it does."

Together with the Photometer, which provides the overall luminosity and other complementary information, Gaia has a complete toolkit to explore the Milky Way. The Milky Way and its immediate neighbours are the only galaxies that can be studied in detail, star-by-star, and what we learn from Gaia will be important for understanding how the myriad of galaxies in the Universe evolve.

Under contract to ESA, and through UK research council funding, the Mullard Space Science Laboratory led a team across Europe to develop the Spectrometer instrument concept over a number of years in the early 2000s. Once the Gaia Prime Contractor, Astrium, was selected, MSSL provided scientific and technical support for the Spectrometer, ensuring its performance was maintained and supporting ESA in the decision-making process throughout the planning and testing of the instrument.

At the same time, MSSL had developed prototype electronics to turn the signals from the detectors into digital images, and while these were not eventually used, this expertise led to a contract with Astrium to calibrate in a detailed and formal way all of the 106 detector and electronics chains for Gaia, so every Gaia detection chain has passed through UCL facilities.

In the 1870s and 1880s, in one of the first ever radial velocity surveys, George Mitchell Seabroke painstakingly measured 1,633 radial velocities of 118 stars by eye!  In contrast, the state-of-the-art Gaia's Radial Velocity Spectrometer will observe 100 spectra per second for six years in space.

"It's incredible to think that it will take Gaia only 16 seconds to automatically observe the same number of spectra it took my great-great-grandfather years to observe." says George (junior). "Gaia will observe over a billion spectra of about 150 million stars during the mission. The numbers blow my mind so I don't know what they would do to his!"

The Mullard Space Science Laboratory team has worked since 2006 on the software to process the data from the Spectrometer for the world-wide community. This has been quite a task, and the software is now ready for launch.

Dr Kawata leads the Galactic modeling work at MSSL. "In order to make the most of our opportunities arising from our Gaia involvements, a number of UCL Mullard Space Science Laboratory staff and students are working in the scientific areas that Gaia will enable," he said.

"This includes modeling of the Milky Way through large simulations, tests of galactic structures such as spiral arms and star clusters, and theoretical approaches to maximise the usefulness of the information that Gaia will provide." Gaia will produce its first catalogs in mid 2016 and the final one circa 2023.