This week the spotlight is on Dr Matthew Pope, Senior Teaching Fellow and researcher at the Institute of Archaeology. 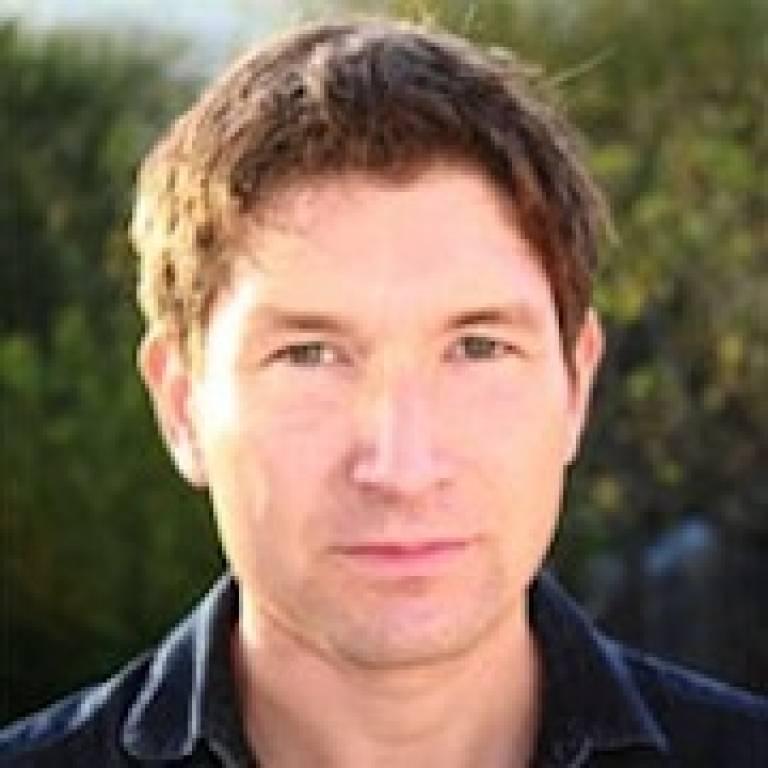 I am a Senior Teaching Fellow and researcher at the Institute of Archaeology. The focus of my research is on the archaeology of human origins, especially Neanderthal tool use and hunting. What excites me about the subject is the possibility of understanding human behaviour in the deep evolutionary past and what it can teach us about how we live our lives today.

I run two undergraduate courses at the Institute of Archaeology and also contribute to our Masters Degree in Palaeoanthropology and Palaeolithic Archaeology. My teaching covers the archaeology of human origins, presenting a story of human development not through the traditional framework of anatomical changes, but directly through the behavioural evidence left in the archaeological record.

It's really rewarding to get students to consider aspects of human life we take for granted. To show them when in our evolutionary journey we first see developments like tool use, fire and art appearing and how these represent radical transformative thresholds. Being human is a complex business but archaeology deals with some of the fundamental nuts and bolts.

I also supervise PhD research which I find extremely rewarding. In October I take on a new PhD student working on the earliest appearance of weaponry in the archaeological record. Her research represents the next stage in a partnership I've been developing with the M.O.D. Defence Academy at Schrivenham. We'll be drawing on their experimental expertise to assess the performance of half-million year old weapons while at the same time providing data for their study of low-velocity impacts.

Another important part of my job is to provide Palaeolithic specialist services in commercial archaeology through the Centre for Applied Archaeology, based at the Institute. In this sphere every job is a new challenge and learning experience, investigating sites for their deep archaeological potential and developing strategies to rescue material ahead of development.

Alongside these core responsibilities I am currently coordinating research projects on a Neanderthal site at La Cotte de St Brelade in Jersey (funded through NERC and the AHRC), a late Neanderthal site called Beedings and the site of the Piltdown hoax in Sussex.

I also undertake a fairly large amount of public engagement work; this means a lot of weekend and evening work but is of course hugely rewarding. Of course archaeology is a vocation for me.

I have been at UCL since 1995. For the first seven years I was a researcher attached to the Boxgrove Project and since then I have been running my own research excavations. In 2008 I began to build a specialist service in Palaeolithic archaeology for commercial archaeology with Archaeology South East.

I took on a teaching position last UCL last year, which was an opportunity I'd been hoping for. The Institute has a culture that forges a strong teaching environment. This has been demonstrated in our position as the top archaeology department for the third year in a row and our strong showing in the new student teaching awards. With an environment like this I thought it was right to hold out for a position at the IOA rather than looking elsewhere. Our students are fantastic.

Designing and implementing a course from scratch which aimed to take undergrads through 2.7 million years in 10 weeks was an exciting challenge. Seeing the essays come back at the end with so many ideas and high levels of understanding was such a pleasure.

My career path hasn't been straightforward, or at times sensible. I had a family at a young age and since 2002 have juggled being a single parent with an academic career involving fieldwork and long commutes. Throughout I've found UCL a supportive, adaptable and productive place to work. The way in which my job has evolved over the past 17 years shows that there isn't any one way to have a career in academia - I've learned that where you work and who you work with counts for far more than anything else.

To date it's working with my co-directors to get the Neanderthal site of La Cotte de St Brelade back under proper research. The site is a monster: a huge ravine system with sediments spanning 200,000 years of the Ice Age and containing more artefacts than the rest of the British Isles put together. It hadn't been looked at since 1986 but after a visit to the island in 2007 I was certain it had great potential.

I worked with a small group of colleagues from the UK to get the site back under study and through small grants, field schools and a lot of good will managed to get the project underway. It hasn't always been an easy ride and meant a few years scraping by on our own resources, but in 2011 we received our first NERC grant and this year received £200,000 from the Jersey government and funding success with the AHRC. We've now secured the project for three years, created jobs and are starting to tell interesting stories about the archaeology of this exceptional site.

I learned various things getting the project to this point, but above all I've learned it's the people you work with that count most of all. The mood, temperament and communication within a team counts for a huge amount, especially in fieldwork. So most of all I'm proud that I get to work with so many great colleagues both within my team and the wider discipline, they are awesome.

As I write I'm preparing for this summer's fieldwork on the Island of Jersey. We are taking UCL students to begin a three-year research project aimed at finding new Ice Age sites and learning more about existing ones on the island.

Now we have funding through the Jersey government we've turned what was initially a small training dig into a much wider project; alongside traditional excavation we'll be accessing sites through diving, abseiling and kayaking, trying to wrestle a deep story of Neanderthal archaeology from the island's dramatic coastal landscape.

We get to work in direct partnership with Jersey Heritage who are developing displays, outreach, web content and site tours with us. Alongside our academic aims we intend to use our fieldwork to promote the island's rich heritage as a unique draw for the public and international tourists. We have developed strong partnership on the island with individuals and institutions - this project presents the culmination of that process.

It's a beautiful island to work on and after a long day of very dusty and hot digging, the sea is never far away, so it's not hard to see the appeal.

(Absolutely top of my to-do list is today is to find a new 4x4 to take to the island. My old landrover has just gone into retirement.)

Film: Either Alien or Working Girl (can never decide which). A lot of people ask if seeing Raiders of the Lost Ark was an influence (I was about 10 when it showed). I guess so, but as a kid I wanted to be Lacombe from Close Encounters more than Indy.

Novel: The Road by Cormack McCarthy. It's raw but covers the whole human experience, black, white and grey. You never take a tin of peaches for granted after reading it.

There might be an awkward atmosphere but Charles Dawson, Arthur Smith Woodward and Teilhard de Chardin would be top of the list. I could ply them with drink and get to the bottom of Piltdown.

Don't assume senior colleagues will be around forever. A few passed away too soon and I wish I had been more attentive, helpful and inquisitive before they did.

As a child I had a skeleton phobia. Maybe that's why I research a period where finding a body is very rare indeed.

Chanctonbury Ring, a circle of beach trees high on the Sussex Downs. The place is always magical, with views over the rolling green hills, across to my village and far off to the sea.

A close second would be in an excavation trench where something exciting might be starting to emerge from the dust. Watching a student focusing intently on their first big find, barely breathing and trying to balance excitement and care as the object is revealed is about as in the moment as you can be.

Third would be curled up with my cats, indoors.