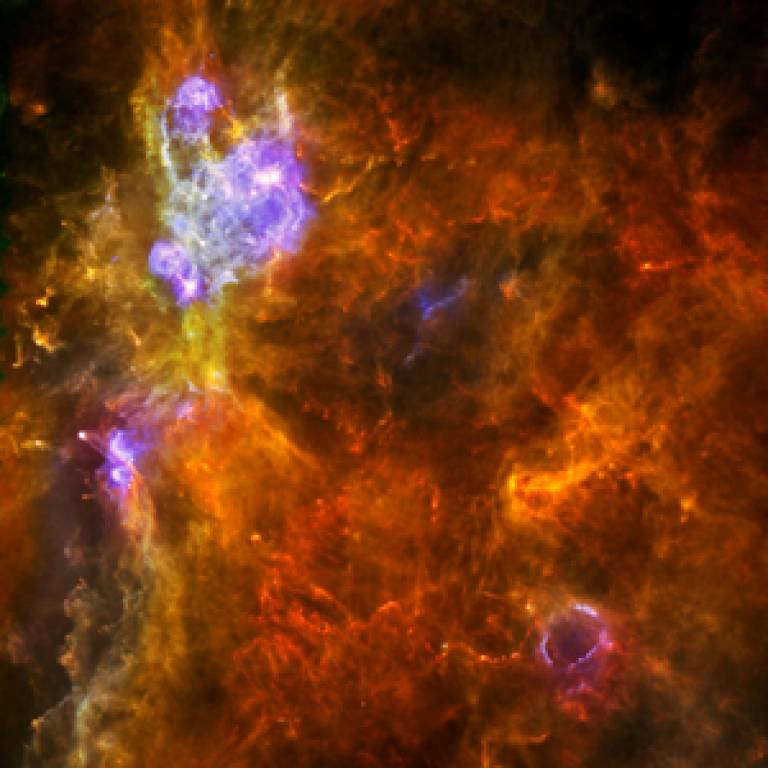 As none of the instruments can work without helium-cooling, Herschel's operational life is now over. The spacecraft itself will soon be placed in a parking orbit around the Sun, but the analysis and evaluation of the data will continue for years to come.

Astronomers, including those at UCL's Mullard Space Science Laboratory (MSSL) and Department of Physics & Astronomy, have already made ground-breaking discoveries about the formation and evolution of stars, galaxies and planets using Herschel data. But this has only scratched the surface, and there is far more still to come from the immense archive.

"The data from Herschel are mind-blowing," said Professor Mat Page, co-investigator on the SPIRE instrument from MSSL and lead author of a paper published in Nature which is based on SPIRE data.

He added:"Herschel SPIRE's wavelength range was uncharted territory 5 years ago. Now we've seen the molecules that are made in supernovae, stars forming around distant black holes, and millions of galaxies which are so obscured that most of their radiation comes from dust rather than stars."

Herschel SPIRE's wavelength range was uncharted territory 5 years ago. Now we've seen the molecules that are made in supernovae, stars forming around distant black holes, and millions of galaxies which are so obscured that most of their radiation comes from dust rather than stars.

UCL scientists have been at the forefront of this exciting mission, both by leading a number of the key scientific investigations carried out by the observatory, and for their prominent role in the design of the SPIRE instrument, one of the three instruments carried on board Herschel.

The SPIRE (Spectral and Photometric Imaging Receiver) instrument, which, made images of the sky simultaneously in three submillimetre 'colours' and measured the spectral features of atoms and molecules, was built by an international consortium headed by the UK.

A flagship mission for the UK Space Agency, Herschel carried over 2000 litres of liquid helium when launched by ESA in May 2009, allowing its instruments to be cooled to a few degrees above absolute zero (-273 °C). The engineers at MSSL were responsible for the design and manufacture of the structure and thermal straps for SPIRE to allow the instrument to work at these cryogenic temperatures.

Over the course of the mission the helium slowly evaporated, with the tank having now finally run dry. Herschel's 3.5 metre diameter mirror and extremely sensitive scientific instruments made it the most powerful infrared observatory ever launched.

"Herschel's observations have revealed the cosmos in unprecedented detail at these wavelengths," comments Göran Pilbratt, Herschel Project Scientist at ESA. "We have very exciting results from the observatory's first few years and we are looking forward to many more exciting discoveries," he adds.

UCL's Professor Bruce Swinyard, Co-Investigator and Instrument Scientist for SPIRE, said: "The instrument engineering team started work on SPIRE in 1996 - after dedicating much of our careers to Herschel it is a fantastic feeling to have seen it through to the final days. The SPIRE instrument has worked perfectly from the first moment we turned it on through to the final observations just completed. The science that Herschel and SPIRE have enabled is beyond anything we predicted 16 years ago when we started on this project.

"This brilliant performance is down to the efforts of the team of hundreds of engineers and scientists that have worked on Herschel over the past decades. We all feel a mixture of sadness that the mission has finally ended, but huge pride in its successful completion."

The data gathered by SPIRE has already resulted in more than 100 papers authored or co-authored by scientists, in MSSL and UCL Physics & Astronomy, in leading scientific journals. This will continue over the coming years when observations made by Herschel will be studied in even more detail resulting in more exciting discoveries.