Patterns in Google searches for financial terms could have been used as early warning signs of stock market movements, according to a new study published in Scientific Reports. 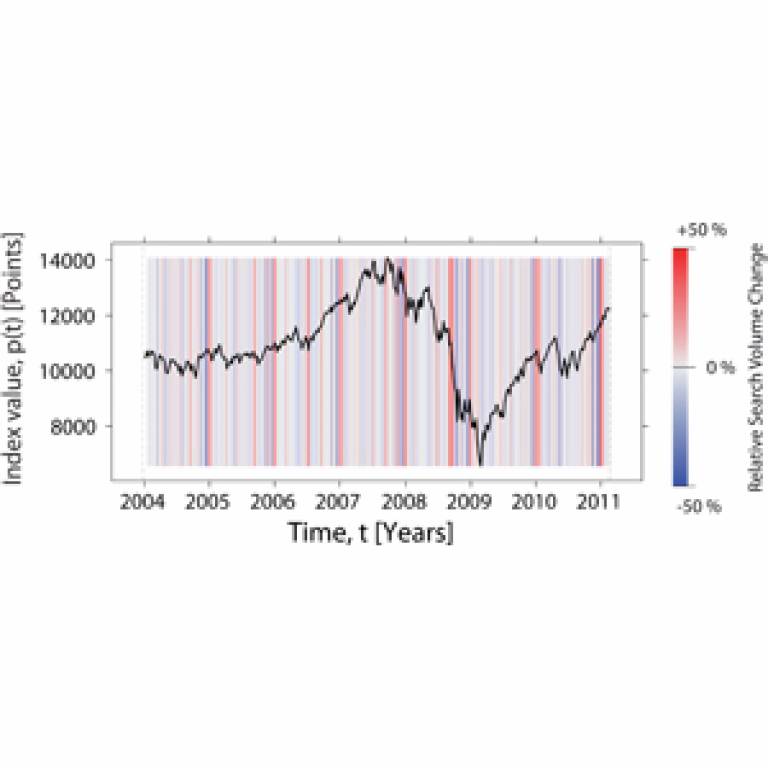 Researchers from UCL Civil, Environmental and Geomatic Engineering, Warwick Business School and the Department of Physics at Boston University highlight the insights large data sets can give into collective decision-making. While stock market data provide detailed records of the actions that drive market movements, they say little about how traders decide to take these actions.

Dr Helen Susannah Moat (UCL Civil, Environmental and Geomatic Engineering) said: "We were intrigued by the idea that data from usage of online search engines might reflect how humans gather information before making decisions."

Tobias Preis, Helen Susannah Moat and H. Eugene Stanley looked for relationships between records of searches on Google between 2004 and 2011 and movements of the Dow Jones Industrial Average. Their analysis of seven years of historical data detected increases in searches for financial market related keywords before stock market falls.

The researchers identified a set of 98 terms, such as "debt", "stocks", "derivatives" and "finance", and investigated the behaviour of a simple hypothetical trading strategy based on how the frequency of searches for these terms changed weekly between 2004 and 2011.

We were intrigued by the idea that data from usage of online search engines might reflect how humans gather information before making decisions.

If the number of searches for a term had decreased in the previous week, compared to earlier weeks, they took a long position on the Dow Jones Industrial Average, buying stock at the start of the week and selling it at the end, benefiting if the price had increased. If, on the other hand, the search volume for a given term had increased then stock was sold at the beginning of the week and bought back at the end, making a profit if the price had dropped.

Performance of this simple Google Trends-based investment strategy varied depending on the term chosen. To investigate this variation, Preis, Moat and Stanley created an index of 'financial relevance' by calculating how often each term occurred in the Financial Times between August 2004 to June 2011 and adjusting this count for frequency of usage in more general language, estimated using the number of Google hits for a term. Analysis showed that more financially relevant terms tended to lead to higher trading strategy returns.

The results of the study are in line with the suggestion that investors may expend more efforts searching for information about the market before they are prepared to sell at lower prices.

Dr Helen Susannah Moat (UCL Civil, Environmental and Geomatic Engineering) said, "By combining data created through our everyday internet usage with large data sets capturing decisions that we make in the real world, we have an opportunity to investigate how information flow affects our behaviour at an unprecedented scale."

The study was carried out as part of the IARPA Open Source Indicators programme, which aims to develop methods for continuous, automated analysis of publicly available data in order to anticipate significant societal events.

"This work illustrates the insight that publicly available data can provide to identify early warning signals of emerging events in the world," said Jason Matheny, programme manager of the Open Source Indicators programme at IARPA.

Image: The closing prices of the Dow Jones Industrial Average (DJIA) are shown here as a black line, plotted against a colour code representing how the number of searches by US users for the term 'debt' changes over time. Red shows an increase in searches, while blue shows a decrease.