A new light-based technique for measuring levels of the toxic protein that causes Huntington's disease (HD) has been used to demonstrate that the protein builds up gradually in blood cells. 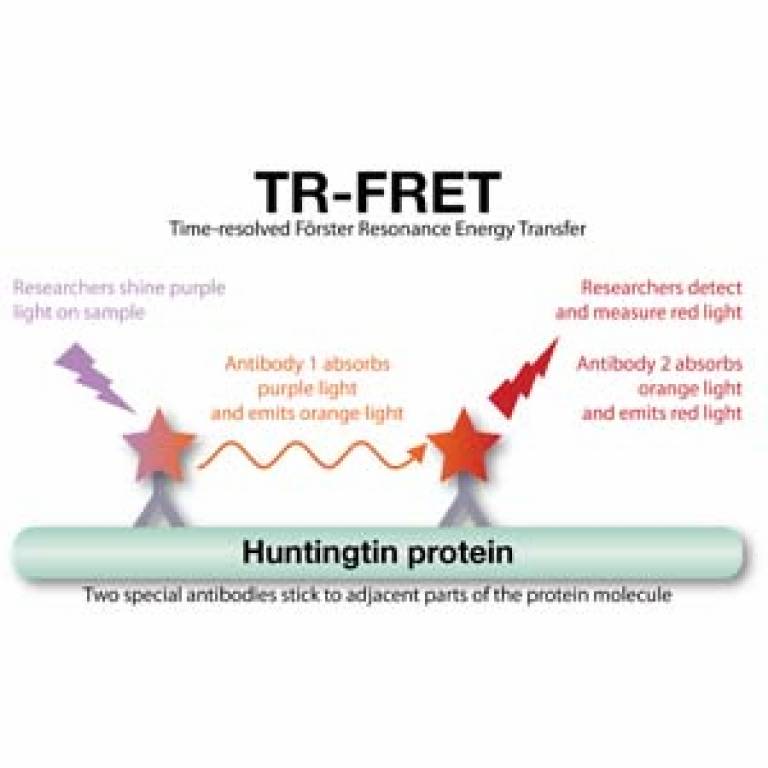 Published today (17th) in the Journal of Clinical Investigation, the findings shed light on how the protein causes damage in the brain, and could be useful for monitoring the progression of HD, or testing new drugs aimed at suppressing production of the harmful protein.

HD is a fatal, incurable, genetic neurological disease that usually develops in adulthood and causes abnormal involuntary movements, psychiatric symptoms and dementia. It is caused by a genetic mutation that results in the production of a harmful protein, called mutant huntingtin.

The research team, led by Professor Sarah Tabrizi of the UCL Institute of Neurology, was made up of scientists from UCL, the Novartis Institutes for Biomedical Research and King's College London. They used a new, ultra-sensitive test to measure how much of the harmful protein and its normal counterpart are found in blood cells from HD patients at different stages of the disease. The test, called TR-FRET, uses pairs of antibodies that stick to huntingtin molecules to absorb and emit light of different colours. This enables very tiny amounts of huntingtin to be detected with great accuracy.

Measuring levels of the mutant protein using TR-FRET is a useful new tool in the fight against Huntington's disease.

The researchers found that levels of the harmful mutant huntingtin protein built up gradually over the course of the disease, from before the patients show any symptoms onwards. HD causes the brain to shrink more rapidly than normal, as measured using MRI scans. Surprisingly, the amount of mutant protein in white blood cells corresponded to the rate of brain shrinkage. This is the first time a blood test has been able to predict brain shrinkage in a neurodegenerative disease. Levels of the normal huntingtin protein, on the other hand, stayed constant throughout the disease.

The team went on to demonstrate that small fragments of the most toxic part of the protein were slowly building-up in the white blood cells - the first time this has been demonstrated in cells from human HD patients. If a similar process occurs in brain cells such as neurons, this finding may help explain how the damage gradually accumulates, eventually causing symptoms of HD.

"Measuring levels of the mutant protein using TR-FRET is a useful new tool in the fight against HD," said Professor Tabrizi. "We can now accurately study the most toxic form of the huntingtin protein in easily obtained blood samples from real patients. The fact that mutant huntingtin levels correlate with brain atrophy tells us we're dealing with something that's relevant to the process of brain degeneration in HD."

The new technique could also be an asset for forthcoming clinical trials of 'gene silencing' drugs that aim to suppress production of the toxic protein in the brain.

"Gene silencing drugs are very promising, but have significant potential for causing side effects, so we really need to know they're doing their job of lowering huntingtin levels," continued Professor Tabrizi. "This TR-FRET technique offers a way of showing that in real human samples, and we hope that it will help speed up the process of developing drugs that work to slow down this terrible disease."