A major three-year trial led by researchers at UCL, in partnership with the Health Protection Agency, has shown that giving one-to-one feedback to healthcare workers makes them twice as likely to clean their hands or use soap. 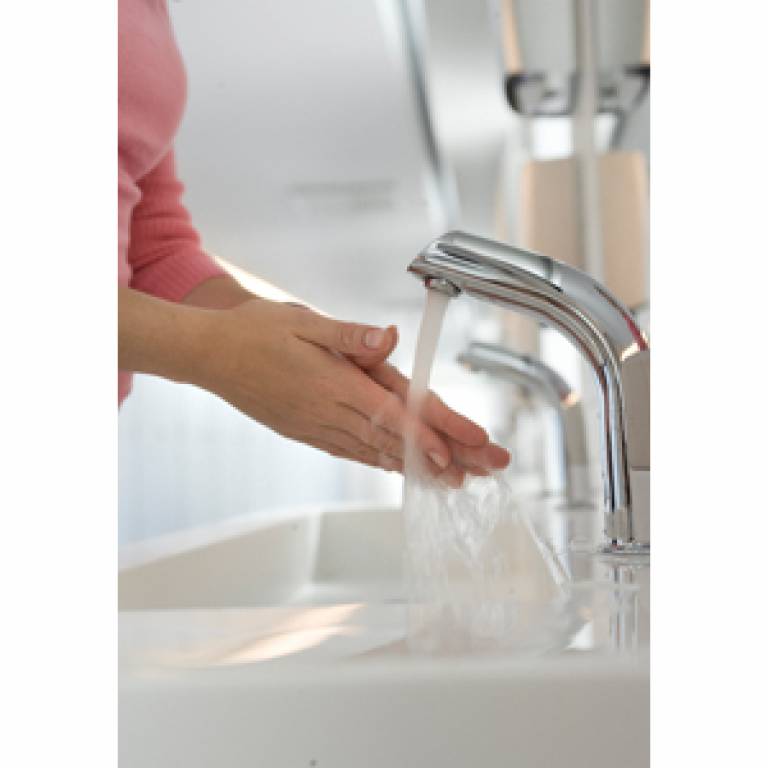 The Feedback Intervention Trial (FIT) is the first such trial to be done in a large number of hospitals anywhere in the world. Carried out across 60 wards in 16 hospitals that were already implementing the English and Welsh Cleanyourhands campaign, the study showed that an intervention that coupled feedback to personalised action planning improved hand-hygiene compliance by up to 18 per cent on Intensive Therapy Units (ITUs) and 13 per cent on Acute Care of the Elderly (ACE) wards. It was also found that soap use increased by 30%.

"This is a landmark trial, as until now there has been no randomised  controlled trial evidence showing which interventions improve hand hygiene compliance in modern hospitals," said principle investigator Dr Sheldon Stone (UCL Division of Medicine). "It is also the first trial to use behavioural sciences to change health care workers hand hygiene behaviour."

This is a landmark trial, as until now there has been no randomised controlled trial evidence showing which interventions improve hand hygiene compliance in modern hospitals.

Sustained improvements in hand-hygiene are key to the World Health Organisation's SAVES LIVES strategy to reduce health-care associated infection, yet hand-hygiene compliance amongst healthcare workers remains poor, with levels of 25-40% being common.

"The study suggests that the NHS should explore using the FIT intervention and learn how best to implement it, as used properly it can be a really powerful tool," said Dr Stone. "The intervention, which couples feedback to personalised action planning, could be included in infection control teams' audit and appraisal systems in order to reduce the burden of healthcare associated infection on hospital wards."

The intervention process involved a four-week audit cycle, with healthcare workers observed for 20 minutes. Immediate feedback was given after the period of observation, and the person was then helped to form a personal action plan for better hand hygiene. The effect was stronger on ITUs than ACEs, where it was easier to implement. The more frequently wards carried out the intervention, the stronger its effect.

In addition to observing and measuring hand-hygiene compliance, the amount of soap and alcohol hand-rub used each month was also collected as another measure of hand-hygiene compliance for each ward. This also gave a better picture of the total weekly usage, as such data was not subject to any observational bias.

"Although audit and feedback is often suggested as a way of improving hand hygiene, this study puts its use on a firmer footing than previous non-randomised studies, providing the strongest evidence yet that this is an effective way to improve hand hygiene when coupled with a repeating cycle of personalised goal-setting and action planning," said Dr Stone.