A new free-standing 'centipede' cinema designed by an academic at the Bartlett School of Architecture, UK - will open this week in Guimarães, Portugal as part of celebrations for the 2012 European Capital of Culture. 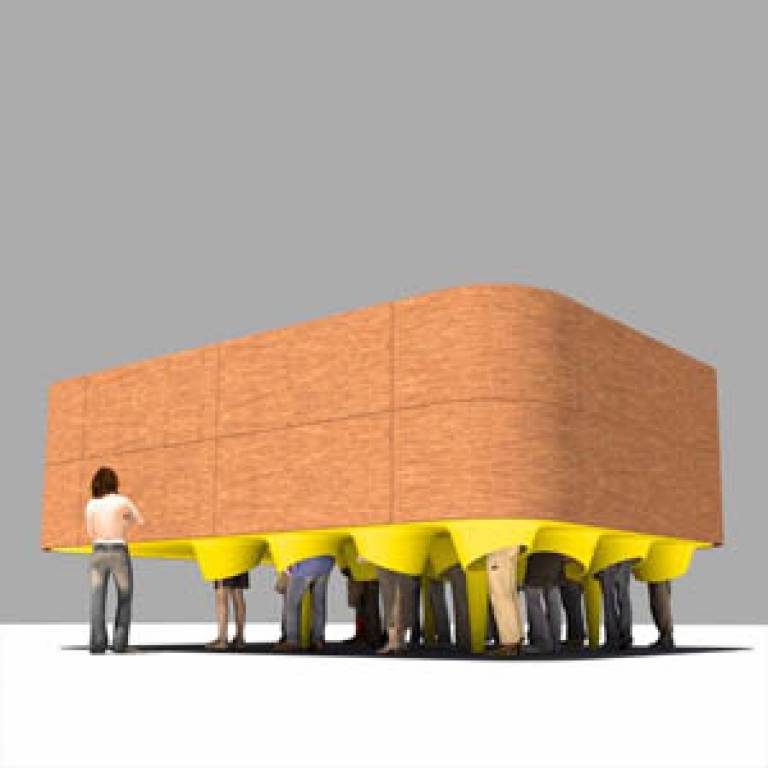 The centipede cinema conceived by Professor Colin Fournier in collaboration with artist Marysia Lewandowska, was commissioned by the 2012 European Capital of Culture as a 'public intervention' for the Portuguese city. The design team lead by Professor Fournier included two former graduates from Diploma Unit 18 at the Bartlett School of Architecture, George King and Mark Nixon, founding partners of a London based design firm called Neon.

The cinema, formally known as the 'Open Cinema', invites film-viewers to enter its canvas and cork structure via one of 16 nozzles so that their upper bodies are part of the cinematic experience whilst their legs are rooted in the outside world.

The alien-like structure creates a stark contrast with the historical streets of Guimarães, a designated UNESCO World Heritage site. This contrast is echoed in the playful juxtaposition of reality and the world of fiction.

The authors were inspired by the Guimarães CineClube (CCG) when conceiving the cinema project. The CCG was founded in 1953 during the authoritarian Portuguese regime Estado Novo, led by António de Oliveira Salazar, which started in 1933.

Professor Fournier explained: "The CineClube brought international films to the city, some of them popular films broadly available from commercial distributors, but also many classic "cinéma d'auteur" art films by directors such as Jean-Luc Godard or Fellini, that often openly conflicted with the right-wing ideology of Salazar's regime.

"They are one of the few groups that were able to offer a radical political critique of society and they survive to this day as a left-wing cultural club.  We wanted to create something that celebrated such an important contribution."

The cinema is also influenced by the local environment and the area's traditional industries. The cinema is made from a steel frame and covered in local cork to promote the flexibility of the material.  Portugal is the world's premier producer of cork, but with the increasing use of synthetic cork in wine bottling, the industry is looking at ways to diversify.

Professor Fournier said: "We wanted to show that cork can be used for architectural purposes.  We used cork for the outer skin and a special dark cork to create the 'black out' effect needed for the cinema."

Inside, viewers will be treated to an hour-long film made up of 20 3-minute trailers selected by local workers. The structure will be revealed on the streets of Guimarães on Saturday 20 October.

The project is part of the exhibition "ReaKt -Views and Processes" which opened on October 20, curated by Gabriela Vaz-Pineiro as part of the Modes of Production of the Art & Architecture programme of Guimaraes 2012 European Capital of Culture.