Building works for a new research centre at UCL will begin later this month, following the formal signing of contracts worth in excess of £70 million with Kier Construction. The new institute, to be known as the Sainsbury Wellcome Centre, will be built on the corner of Howland Street and Charlotte Street. It has been designed by the award-winning firm Ian Ritchie Architects, with a team of specialist consultants including Arup, to develop the vision of all three stakeholders for the Centre.

The Sainsbury Wellcome Centre represents a partnership between the Gatsby Charitable Foundation and the Wellcome Trust to establish a new research centre in Neural Circuits and Behaviour at UCL.

The neuroscientists working in the Sainsbury Wellcome Centre will use state-of-the-art molecular and cellular biology, imaging, electrophysiology and behavioural techniques, supported by computational modelling, to investigate how circuits in the brain process information to create neural representations and drive behaviour.

Since the London Borough of Camden approved the plans in July 2011, work to demolish the existing building on the site has been completed. Enabling works for the new building commenced late February 2012 and the Centre is expected to be completed in 2014.

The new Sainsbury Wellcome Centre promises to be an exciting and innovative structure designed around the needs of the scientists who will carry out research in the building, as well as delivering an aesthetically pleasing addition to the local environment. The architects (IRAL) and engineers (Arup) have worked very closely with scientific advisers to ensure that the design and functionality of the building will be innovative, adaptable and functional. 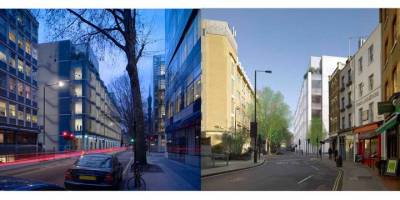 Professor John O'Keefe, Interim Director of the Sainsbury Wellcome Centre, commented: "This important milestone will see the building project moving from design phase to implementation.We look forward to the new building going up and are confident that, when completed, it will provide a world-class facility for neuroscientists from UCL and from around the UK."

UCL and the funders already work together with great success - the Gatsby Computational Neuroscience Unit and the Wellcome Trust Centre for Neuroimaging at UCL are both world-leaders in their fields.

The Sainsbury Wellcome Centre will form part of the UCL main campus and will complement the current strength of UCL's neuroscience research community and its relationships with other medical research organisations in the local area.