Imanova, a new state-of-the-art imaging centre co-owned by the Medical Research Council and three of London's leading universities, has been formally launched at a showcase event attended by representatives from the founding organisations and Rt Hon David Willetts MP, Minister for Universities and Science. 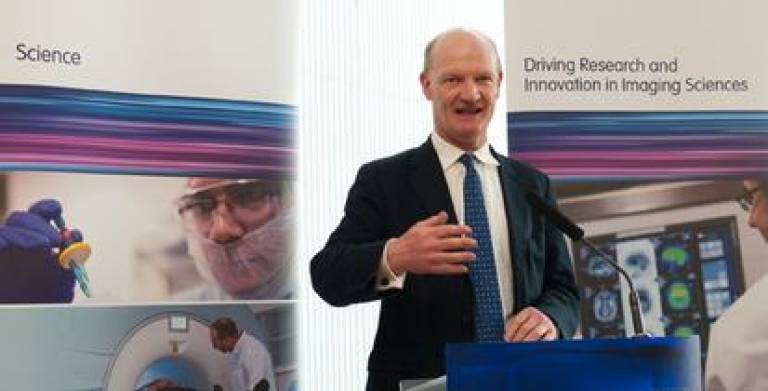 Imanova is a pioneering public-private collaboration formed by the MRC, Kings College London, UCL and Imperial College London. From a site established and previously run by the pharmaceutical company GlaxoSmithKline, Imanova now plans to become an internationally renowned imaging centre and partner of choice for industry and academia looking to use its world-class imaging facilities.

During his speech at the launch, Kevin Cox, Imanova CEO, explained: "This is a novel collaboration, both between leading academic institutions and between academia and industry, which has been set up to act as a catalyst across the innovation pipeline. Our aim is to accelerate the translation of great science into clinically and commercially relevant products and services.

"For example, we are currently introducing a new biomarker for schizophrenia to help in novel drug discovery. In oncology we're implementing novel imaging probes to measure key disease pathways, such as angiogenesis and apoptosis, which will provide invaluable information for the development of new anticancer drugs. This could transform drug discovery in these diseases."

David Willetts MP spoke to highlight the governments support for the collaborative approach Imanova is pioneering: "The Government's life sciences strategy underlined the importance of collaboration between the research base and industry as a means of driving growth and innovation. Imanova is an excellent example of this. It brings together leading academics and businesses to accelerate drug discovery and development, and is also attracting overseas investment."

With both PET and MRI scanning in the same centre, Imanova is unique in the UK. These facilities are expected to have ground breaking effects on drug development in the UK, catalysing translational research, and offering the potential to significantly shorten drug development times.

Since opening last October Imanova has grown from strength to strength. The centre is gaining a firm standing in academic research and the company is now securing its first private partnerships with industry.

Professor Sir John Tooke, UCL Vice-Provost (Health), added: "Imanova is a ground-breaking collaboration that will draw on UCL's considerable strengths in radiochemistry, imaging and image analysis and drug development, speeding the development of novel diagnostics and therapies. Our involvement signals our deep commitment to the life sciences strategy and the projection of London as a world class centre for translational biomedical research."