The tuatara, an iconic New Zealand reptile, chews its food in a way unlike any other animal on the planet - challenging the widespread perception that complex chewing ability is closely linked to high metabolism. 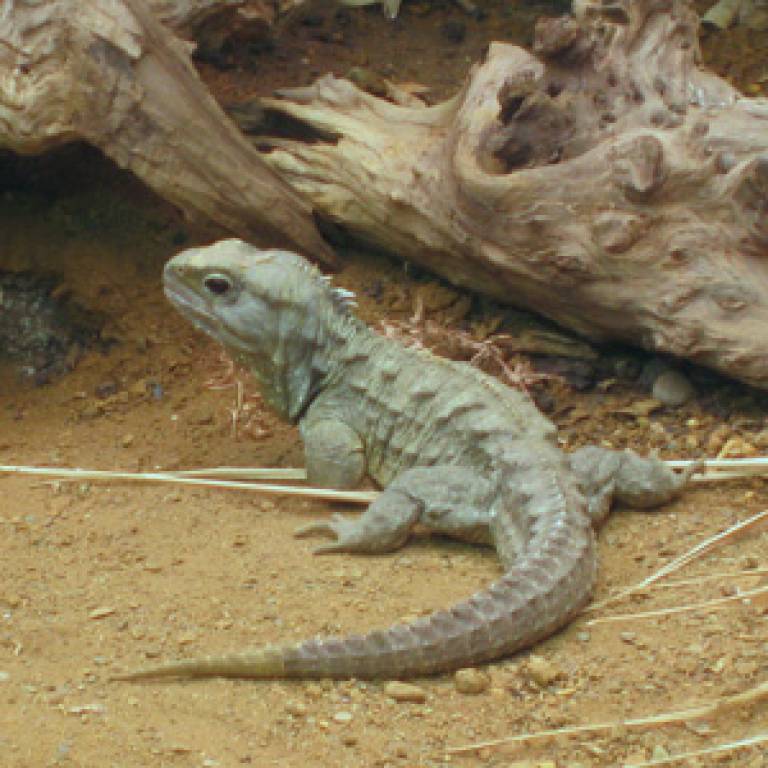 Using a sophisticated computer model, scientists from UCL and the University of Hull demonstrate how the tuatara is able to slice its food like a "steak knife". The tuatara's complex chewing technique raises doubts about the supposed link between chewing and high metabolism in mammals.

The New Zealand tuatara (Sphenodon) is a lizard-like reptile that is the only survivor of a group that was globally widespread at the time of the dinosaurs. It lives on 35 islands scattered around the coast of New Zealand and was recently reintroduced to the mainland. Its diet consists of beetles, spiders, crickets, small lizards and, occasionally, sea birds.

In a paper published in The Anatomical Record, scientists describe the highly specialised jaws of the tuatara. When the reptile chews, the lower jaw closes between two rows of upper teeth. Once closed, the lower jaw slides forward a few millimetres to cut food between sharp edges on the teeth, sawing food apart.

Because mammals show the most sophisticated form of chewing, chewing has been linked to high metabolism. However, the tuatara chews food in a relatively complex way but its metabolism is no higher than that of other reptiles with simpler oral food processing abilities.

Lead author Dr Marc Jones, UCL Cell and Developmental Biology, said: "Some reptiles such as snakes are able to swallow their food whole but many others use repeated bites to break food down. The tuatara also slices up its food, much like a steak knife."

"Because mammals show the most sophisticated form of chewing, chewing has been linked to high metabolism. However, the tuatara chews food in a relatively complex way but its metabolism is no higher than that of other reptiles with simpler oral food processing abilities. Therefore the relationship between extensive food processing and high metabolism has perhaps been overstated."

The team report that due to the shape of the jaw joint, as the jaws slide forwards they also rotate slightly about their long axes. This makes the shearing action more effective and demonstrates that the left and right lower jaws are not fused together at the front as they are in humans.

The tuatara provides an example in which specialisation of the feeding mechanism appears to allow a broader diet.

Dr Jones said: "The slicing jaws of the tuatara allow it to eat a wide range of prey including beetles, spiders, crickets, and small lizards. There are also several grizzly reports of sea birds being found decapitated following predation by tuatara."

"Although the tuatara-like chewing mechanism is rare today, fossils from Europe and Mexico show us that during the time of the dinosaurs (about 160 million years ago) some fossil relatives of the tuatara used a similar system and it was much more widespread."

The team used a computer model developed at the University of Hull which provides a novel way of investigating the evolution and biodiversity of reptiles, allowing complex moving structures to be studied in 3D and from all angles.

Co-author Dr Neil Curtis from the University of Hull's Department of Engineering said: "We developed this virtual model using software that is widely used in the analysis of complex engineering systems. It is the most detailed musculoskeletal model of a skull ever developed and demonstrates the huge potential of this type of computer modelling in biology.

"It allows us to investigate movements within skulls that would be impossible to monitor in a live animal without using harmful X-rays which is not an option for protected species like the tuatara."

The study was funded by the Biotechnology and Biological Sciences Research Council (BBSRC) and The Palaeontological Association.