Butterfly genome reveals a promiscuous past

An international collaborative study to map the genome of a South American butterfly has identified the secret behind its mimetic nature. 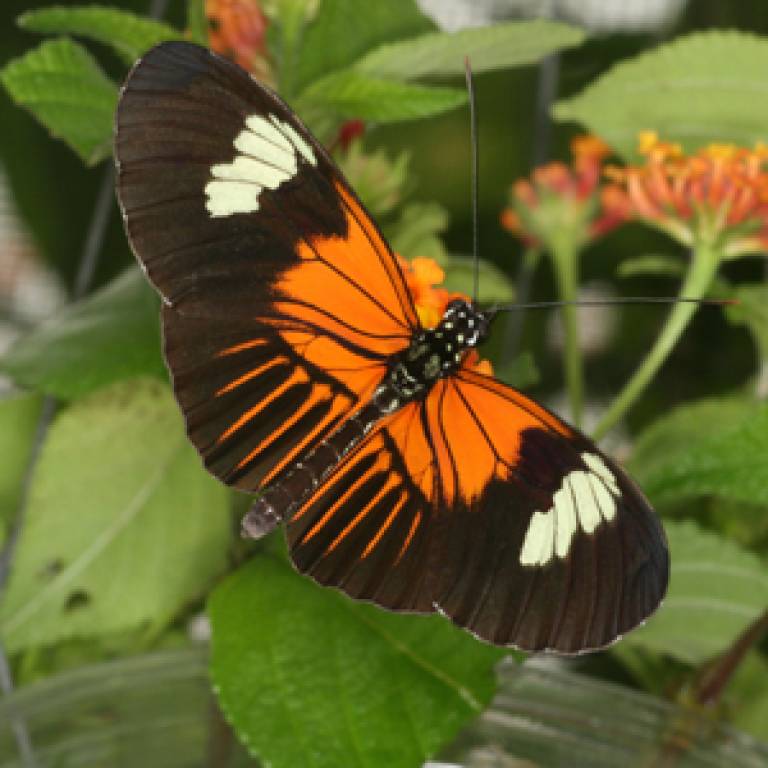 The genome sequence of the Postman butterfly, Heliconius melpomene, was used as a reference to study species that live together in the Peruvian Amazon. Several of these share bright wing patterns in order to reinforce a warning signal that they are bad to eat - dissuading predators from attack.

Sequence data showed that those species with similar wing patterns shared a similar genetic signal, precisely in those narrow regions of the genome responsible for controlling patterns. This is a result of hybrid exchange of genes between three co-mimic species, which has allowed them to copy each other's wing patterns.

Dr Kanchon Dasmahapatra (UCL Genetic, Evolution & Environment), who worked with Professor James Mallet, said, "What we show is that one butterfly species can gain its protective colour pattern genes ready-made from a different species by hybridizing (or interbreeding) with it. A much faster process than having to evolve one's colour patterns from scratch."

Dr Chris Jiggins of the University of Cambridge said, "These butterflies, in order to better survive in the wild, have taken successful survival techniques from other butterflies and have incorporated them into their own genetic code. This is significant as it has occurred in a natural adaptive radiation, suggesting an important role for hybrids in the origins of biodiversity."

What we show is that one butterfly species can gain its protective colour pattern genes ready-made from a different species by hybridizing (or interbreeding) with it. A much faster process than having to evolve one's colour patterns from scratch.

The phenomenon, known as adaptive introgression, involves different species sharing genetic material and has been considered very rare, especially in animals. Although many species can interbreed in the wild, the resulting hybrids are often infertile and considered an evolutionary dead-end.

However, occasionally hybrids might introduce useful genetic material that can help populations adapt to changing conditions. This source of novelty might be more effective than having to wait for a mutation to occur in order to yield a similar result. In the case of butterflies, the effects can be clearly seen on their wings.

The butterfly genus Heliconius is found in the tropical and sub-tropical regions of the Americas, from the Amazon basin to Texas and has been studied by scientists since the Victorian era.

Dr Jiggins added: "The genus Heliconius has been the subject of evolutionary studies since Darwin's time, and the original formulation of mimicry theory. We are especially interested in them because their convergent wing patterns offer an opportunity to study the repeatability of evolutionary change."

The sequencing of a butterfly genome also offers some remarkable insights into the biology of these charismatic insects. Butterflies are thought to be more visual in their communication as compared to night-flying moths. Surprisingly, analysis carried out at the University of California by Adriana Briscoe showed that they have an even greater array of genes involved in chemical communication as compared to moths.

Owen McMillan of the Smithsonian Tropical Research Institute in Panama said: "We are accustomed to thinking of butterflies as brightly coloured, primarily visual insects, but the presence of such a rich array of olfactory receptors and chemosensory genes, suggests that smell and taste are also vital."

The study heralds a new era in genome biology, in which genome sequencing has become available to small groups of researchers for their own organism of choice. In this case academics from 9 labs across the globe each contributed to a pool of funding that permitted the sequencing effort, without any major grant funding.