Antibodies that block the process of synapse disintegration in Alzheimer's disease have been identified, raising hopes for a treatment to combat early cognitive decline in the disease. 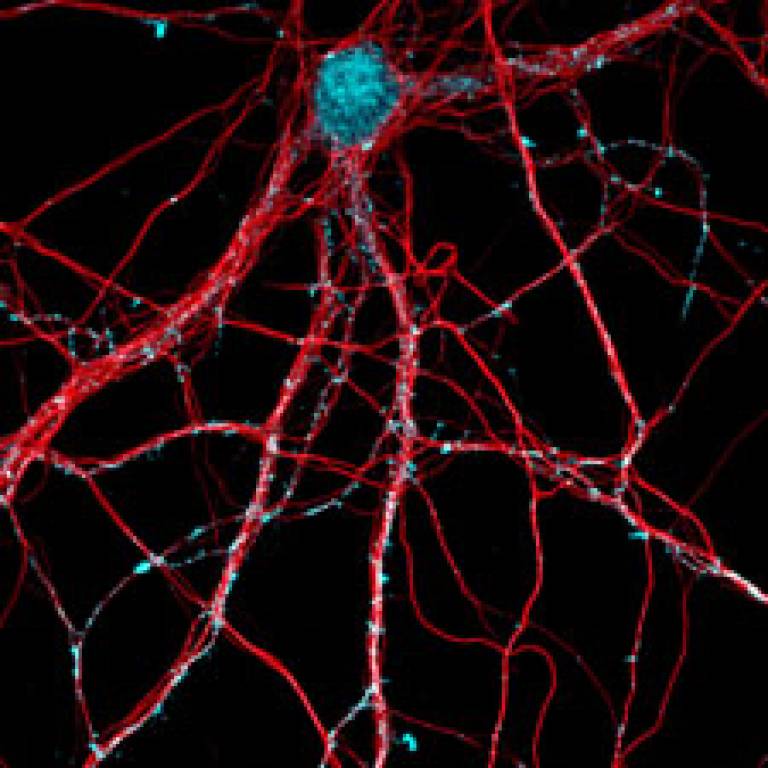 Alzheimer's disease is characterized by abnormal deposits in the brain of the protein Amyloid-ß, which induces the loss of connections between neurons, called synapses.

Now, scientists at UCL have discovered that specific antibodies that block the function of a related protein, called Dkk1, are able to completely suppress the toxic effect of Amyloid-ß on synapses. The findings are published today in the Journal of Neuroscience.

Professor Patricia Salinas (UCL Department of Cell & Developmental Biology) who led the study, said:  "These novel findings raise the possibility that targeting this secreted Dkk1 protein could offer an effective treatment to protect synapses against the toxic effect of Amyloid-ß.

"Importantly, these results raise the hope for a treatment and perhaps the prevention of cognitive decline early in Alzheimer's disease."

Dkk1 is elevated in the brain biopsies of people with Alzheimer's disease but the significance of these findings was previously unknown.  Scientists at UCL have found that Amyloid-ß causes the production of Dkk1, which in turn induces the dismantling of synapses (the connections between neurons) in the hippocampus, an area of the brain implicated in learning and memory.

Importantly, these results raise the hope for a treatment and perhaps the prevention of cognitive decline early in Alzheimer's disease.

In this paper, scientists conducted experiments to look at the progression of synapse disintegration of the hippocampus after exposure to Amyloid-ß, using brain slices from mice. They were able to monitor how many synapses survived in the presence of a specific antibody which targets Dkk1, compared to how many synapses were viable without the antibody.

The results show that the neurons that were exposed to the antibody remained healthy, with no synaptic disintegration.

Professor Salinas said: "Despite significant advances in understanding the molecular mechanisms involved in Alzheimer's disease, no effective treatment is currently available to stop the progression of this devastating disease."

She added: "This research identifies Dkk1 as a potential therapeutic target for the treatment of Alzheimer's disease."

Alzheimer's represents 60% of all cases of dementia. Alzheimer's Research UK estimates that in the UK the annual national cost of all the dementias is around £23 billion, which represents double the costs for cancer and 3-5 times the costs for heart disease and stroke.

New studies predict an increase in the number of Alzheimer's cases of epidemic proportions. The research was funded by Alzheimer's Research UK, the UK's leading dementia research charity, and the Biotechnology and Biological Sciences Research Council, UK.

Dr Simon Ridley, Head of Research at Alzheimer's Research UK, said: "We're delighted to have supported this study, which sheds new light on the processes that occur as Alzheimer's develops. By understanding what happens in the brain during Alzheimer's, we stand a better chance of developing new treatments that could make a real difference to people with the disease.

"Studies like this are an essential part of that process, but more work is needed if we are to take these results from the lab bench to the clinic. Dementia can only be defeated through research, and with the numbers of people affected by the condition soaring, we urgently need to invest in research now."

Image: Amyloid beta (cyan blue) binds to nerve cells of the hippocampus (red) and attacks synapses resulting in the loss of memories in Alzheimer's disease. New research has led to important insights into the mechanisms that induce synapse loss. The discovery brings hope for the development of new therapies that protect synapses and therefore prevent memory loss in Alzheimer's disease.