DNA traces cattle back to a small herd domesticated around 10,500 years ago

All cattle are descended from as few as 80 animals that were domesticated from wild ox in the Near East some 10,500 years ago, according to a new genetic study. 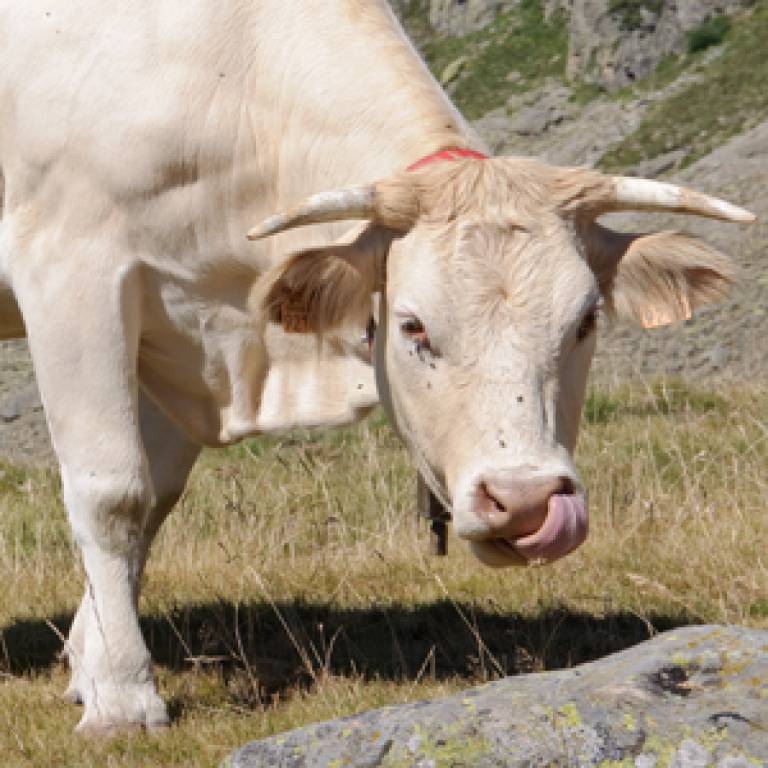 An international team of scientists from the CNRS and National Museum of Natural History in France, the University of Mainz in Germany, and UCL in the UK were able to conduct the study by first extracting DNA from the bones of domestic cattle excavated in Iranian archaeological sites. These sites date to not long after the invention of farming and are in the region where cattle were first domesticated.

The team examined how small differences in the DNA sequences of those ancient cattle, as well as cattle living today, could have arisen given different population histories. Using computer simulations they found that the DNA differences could only have arisen if a small number of animals, approximately 80, were domesticated from wild ox (aurochs).

The study is published in the current issue of the journal Molecular Biology and Evolution.

Dr Ruth Bollongino of CNRS, France, and the University of Mainz, Germany; lead author of the study, said: "Getting reliable DNA sequences from remains found in cold environments is routine.

"That is why mammoths were one of the first extinct species to have their DNA read. But getting reliable DNA from bones found in hot regions is much more difficult because temperature is so critical for DNA survival. This meant we had to be extremely careful that we did not end up reading contaminating DNA sequences from living, or only recently dead cattle."

The number of animals domesticated has important implications for the archaeological study of domestication.

We know from archaeological remains that the wild ancestors of modern-day cattle, known as aurochs, were common throughout Asia and Europe, so there would have been plenty of opportunities to capture and domesticate them.

Prof Mark Thomas, geneticist and an author of the study based at the UCL Research Department of Genetics, Evolution and Environment: "This is a surprisingly small number of cattle. We know from archaeological remains that the wild ancestors of modern-day cattle, known as aurochs, were common throughout Asia and Europe, so there would have been plenty of opportunities to capture and domesticate them."

Prof Joachim Burger, an author of the study based at the University of Mainz, Germany, said: "Wild aurochs are very different beasts from modern domestic cattle.

"They were much bigger than modern cattle, and wouldn't have had the domestic traits we see today, such as docility. So capturing these animals in the first place would not have been easy, and even if some people did manage snare them alive, their continued management and breeding would still have presented considerable challenges until they had been bred for smaller size and more docile behaviour."

Archaeological studies on the number and size of prehistoric animal bone have shown that not only cattle, but also goats, sheep and pigs were all first domesticated in the Near East. But saying how many animals were domesticated for any of those species is a much harder question to answer. Classical techniques in archaeology cannot give us the whole picture, but genetics can help - especially if some of the genetic data comes from early domestic animals.

Dr Jean-Denis Vigne, a CNRS bio-archaeologist and author on the study, said: "In this study genetic analysis allowed us to answer questions that - until now -archaeologists would not even attempt to address.

"A small number of cattle progenitors is consistent with the restricted area for which archaeologists have evidence for early cattle domestication ca. 10,500 years ago. This restricted area could be explained by the fact that cattle breeding, contrary to, for example, goat herding, would have been very difficult for mobile societies, and that only some of them were actually sedentary at that time in the Near East."

Dr Marjan Mashkour, a CNRS Archaeologist working in the Middle East added "This study highlights how important it can be to consider archaeological remains from less well-studied regions, such as Iran. Without our Iranian data it would have been very difficult to draw our conclusions, even though they concern cattle at a global scale."

UCL Research Department of Genetics, Evolution & Environment
Research in the journal of Molecular Biology and Evolution