Transplant of patient-derived stem cells into mice with muscular dystrophy

Stem cells from patients with a rare form of muscular dystrophy have been successfully transplanted into mice affected by the same form of dystrophy, according to a new study published today in Science Translational Medicine. 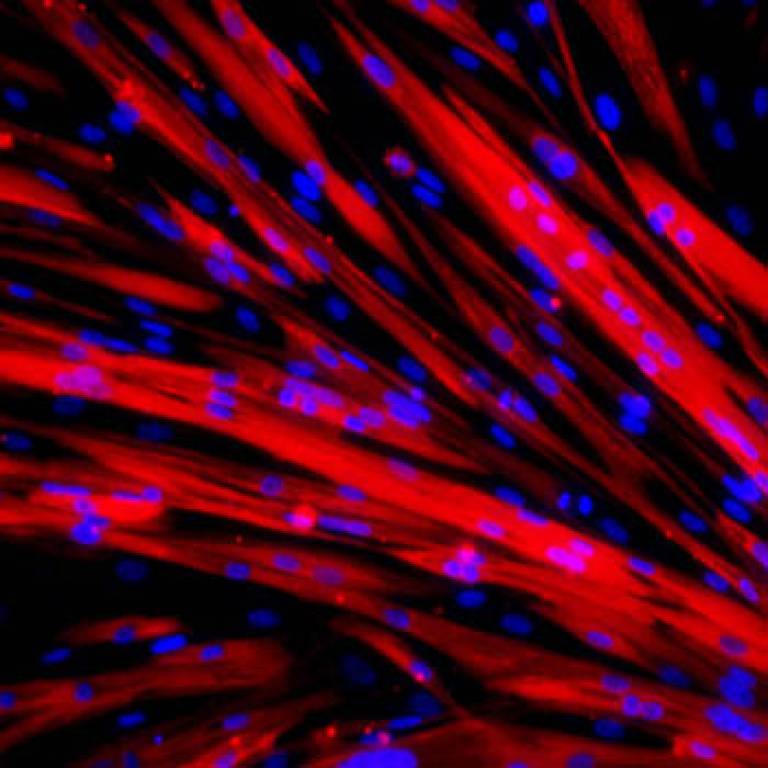 For the first time, scientists have turned muscular dystrophy patients' fibroblast cells (common cells found in connective tissue) into stem cells and then differentiated them into muscle precursor cells. The muscle cells were then genetically modified and transplanted into mice.

The new technique, which was initially developed at the San Raffaele Scientific Institute of Milan and completed at UCL, could be used in the future for treating patients with limb-girdle muscular dystrophy (a rare form in which the shoulders and hips are primarily affected) and, possibly, other forms of muscular dystrophies.

Muscular dystrophies are genetic disorders primarily affecting skeletal muscle that result in greatly impaired mobility and, in severe cases, respiratory and cardiac dysfunction. There is no effective treatment, although several new approaches are entering clinical testing including cell therapy.

This is a major proof of concept study. We have shown that we can bypass the limited amount of patients' muscle stem cells using induced pluripotent stem cells and then produce unlimited numbers of genetically corrected progenitor cells.

In this study, scientists focused on genetically modifying a type of cell called a mesoangioblast, which is derived from blood vessels and has been shown in previous studies to have potential in treating muscular dystrophy. However, the authors found that they could not get a sufficient number of mesoangioblasts from patients with limb-girdle muscular dystrophy because the muscles of the patients were depleted of these cells.

Instead, scientists in this study "reprogrammed" adult cells from patients with limb-girdle muscular dystrophy into stem cells and were able to induce them to differentiate into mesoangioblast-like cells. After these 'progenitor' cells were genetically corrected using a viral vector, they were injected into mice with muscular dystrophy, where they homed-in on damaged muscle fibres.

The researchers also showed that when the same muscle progenitor cells were derived from mice the transplanted cells strengthened damaged muscle and enabled the dystrophic mice to run for longer on a treadmill than dystrophic mice that did not receive the cells.

Dr Francesco Saverio Tedesco, UCL Cell & Developmental Biology, who led the study, said: "This is a major proof of concept study. We have shown that we can bypass the limited amount of patients' muscle stem cells using induced pluripotent stem cells and then produce unlimited numbers of genetically corrected progenitor cells.

Professor Giulio Cossu, another UCL author, said: "This procedure is very promising, but it will need to be strenuously validated before it can be translated into a clinical setting, also considering that clinical safety for these "reprogrammed" stem cells has not yet been demonstrated for any disease."

Images: (Top) Immunofluorescence staining of the progenitor cells derived from the pluripotent stem cells generated from one of the patients. Specifically, myotubes (the counterpart of muscle fibres in a dish) from differentiated progenitor cells. Red: myosin heavy chain; blue: nuclei. (Bottom) Muscle progenitor cells (green) in vivo in a muscle three weeks after transplantation in dystrophic mice.