An international team of scientists has uncovered the structure of the protective protein coat which surrounds many bacteria like a miniature suit of armour. 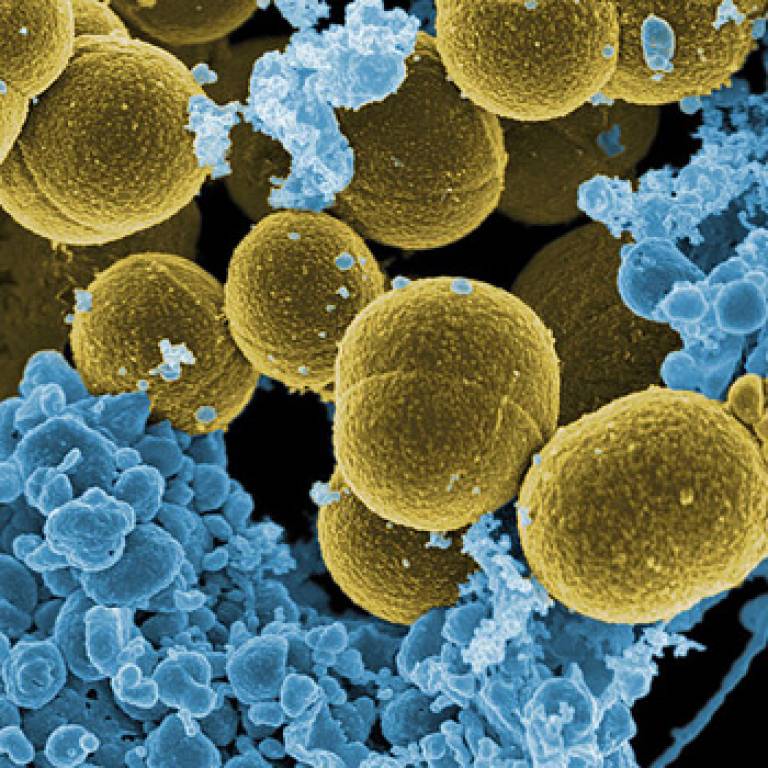 Their research, which is published in Nature, has far ranging consequences in helping us understand how bacteria cause disease, and could help us develop new vaccines.

Until now, scientists have known very little about the structure and function of this coat, which scientists call S-layer, despite the fact that some bacteria invest as much as a third of their total protein production in building it.

The team of scientists, funded in the UK by the Biotechnology and Biological Sciences Research Council, were able to image the S-layer of a harmless soil bacterium called Geobacillus stearothermophilus down to the scale of a single atom. They revealed that the individual proteins of the protective layer hook together much like the chainmail of a medieval knight.

Dr Stefan Howorka (UCL Chemistry) led the work in the UK. He explains "These protein coats have remained quite mysterious to scientists even though they are found on a huge variety of bacteria.

"Using advanced imaging techniques, we have uncovered for the first time the structure of an S-layer in remarkable detail showing that it is put together just like chainmail. This miniscule layer provides a flexible coat of armour for the bacteria which also allows important nutrients and other substances in and out."

This chainmail coat supports the shape of bacteria and protects them from environmental hazards. The coat is also thought to be important in allowing many pathogenic bacteria to infect cells, helping germs to stick to and slide into human or animal cells where they can wreak havoc. Other pathogens coat themselves with a protein lattice that makes them invisible to the radar of the immune system.

Dr Howorka continues "Now that we have worked out how to obtain the structure of the S-layer in one bacterium, scientists are working to reveal the structure of the protein coats of other species. At the top of the priority list is for us to uncover the bacterial armour of pathogens like C. difficile and Bacillus anthraci, the bug which causes anthrax. Once we know how the armour of these bacteria fits together we might be able to find a chink to target with new antibiotics and vaccines."

The remarkable structure of the S-layer coat also holds promise as a carrier for vaccines. The proteins which form the chainmail links of the S-layer arrange themselves into the protective coat which means it is relatively easy to create harmless vessels from S-later sheets.

Professor Douglas Kell, BBSRC Chief Executive said "This work is a great example of how important it is to study the secrets of how nature fits together at the most minute scale. By revealing how things look we can gain an insight into how they work. Understanding how nature works is going to be crucial in combating many of the great challenges facing society, including the effort to keep people fit and healthy into old age."