Most older pedestrians unable to cross the road in time

The ability to cross a road in time is one that most of us take for granted. 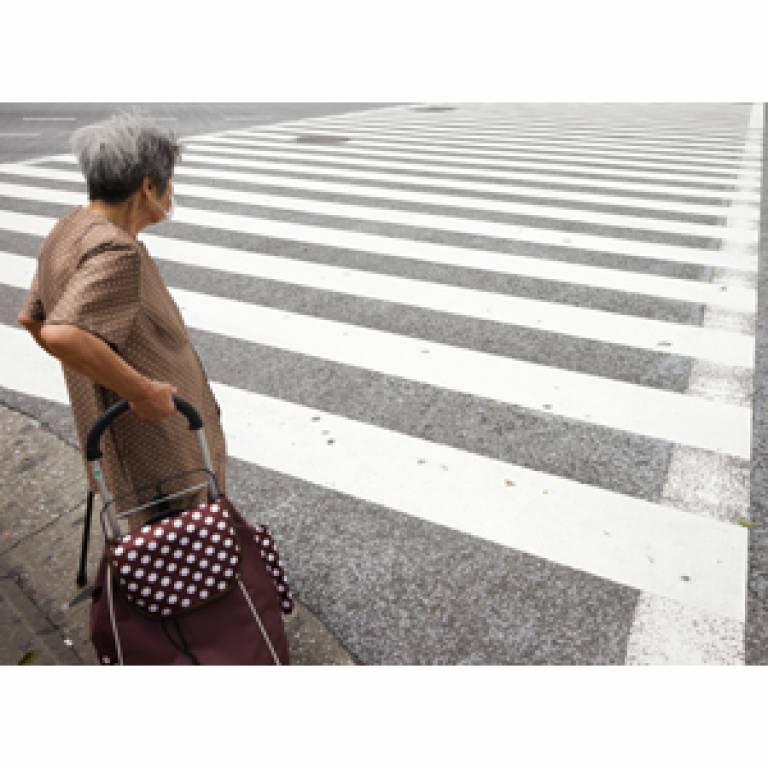 A new UCL study published in the journal Age and Ageing, entitled 'Most Older Pedestrians are unable to cross the road in time: a cross-sectional study', has compared the walking speed of the older population in the UK (aged 65 and over) with the speed required to use a pedestrian crossing.

As age increased in the participants, the speed at which they could walk also decreased. Overall, 76% of men and 85% of women had a walking speed that was below the required speed of 1.2 meters per second. The research also found that 93% of women and 84% of men had walking impairment.

Older pedestrians are more likely to be involved in a road traffic collision than younger people due to slower walking speed, slower decision making and perceptual difficulties.

Dr Asher says, "Being able to cross the road is extremely important for local residents. It affects older adults' health, as they are more likely to avoid crossing a busy road. Walking is an important activity for older people as it provides regular exercise and direct health benefits. Being unable to cross a road may deter them from walking, reducing their access to social contacts and interaction, local health services and shops, that are all important in day to day life."

She adds: "Older pedestrians are more likely to be involved in a road traffic collision than younger people due to slower walking speed, slower decision making and perceptual difficulties. Older people who are hit are also more likely to die from their injuries than younger people. Having insufficient time at a road crossing may not increase the risk of pedestrian fatalities but it will certainly deter this group from even trying to cross the road.

"For older people, the ability to venture outside of the home is not only important for health benefits but is also important to maintain relationships, social networks and independence. Physical activity in older residents is dependent on their ability to negotiate their local environment, including crossing a road safely. The groups of people identified in this study as the most vulnerable and as having a walking impairment are also the least likely to have access to other, more expensive, forms of transport."

Dr Jennifer Mindell (UCL Epidemiology and Public Health), senior author of the research, says: "We found that the amount of time given to pedestrians to cross a road assumes a walking speed that is much too fast for most older people. They have insufficient time to reach the far side, so may decide not to even try.

"The impact on the older population is therefore not just the immediate risk of injury. Feeling that you cannot negotiate the outside world causes psychological distress. It also deters people from even going out, feeling they are unable to cross roads safely. We need better quality public spaces that enable everyone to live well and comfortably."

Dr Asher and her colleagues built upon established knowledge of walking speeds by also showing that the 'oldest old', those living in a deprived area, current smokers, and those with a poor grip strength, were most likely to have a walking impairment. Older adults whose general health was rated as fair or worse, or who had a longstanding illness were also more likely to have a walking impairment. The cross-sectional study used 2005 data from the Health Survey for England (HSE), a nationally representative survey of adults and children living in private households. It also included a boost sample of people aged above 65 years old. Data from these participants was collected from an interview and nurse visit. In total, 3,145 older adults received a nurse home visit, with 90% of men and 87% of women taking the walking speed test.

Dr Asher says, "The strength of this study is that it provides an accurate picture of the proportion of people aged 65 and over in the general population who are likely to be unable to use pedestrian crossings safely. The study has a large sample size and the inclusion of participants with disability means that the study is representative of the older population. By testing people in the general population rather than those already using a pedestrian crossing, we have included people who may have difficulty using a pedestrian crossing and are therefore unwilling to use them.

"Further consideration needs to be taken on the time allowed at pedestrian crossings. Pedestrian crossing times are currently being decreased in London as part of the Smoothing Traffic Flow Strategy, which is one component of the 2010 Mayor's Transport Strategy. Although there has been no alteration in the minimum assumed walking speed of pedestrians, there is a reduced 'invitation to cross' (green man) time.

"Our study has shown that even before these changes, the vast majority of people over 65 years old in England are unable to walk fast enough to use a pedestrian crossing."