A striking art installation of fabric woven in between the neoclassical columns of the portico has been installed by UCL Slade School of Fine Art student Nicolas Feldmeyer. 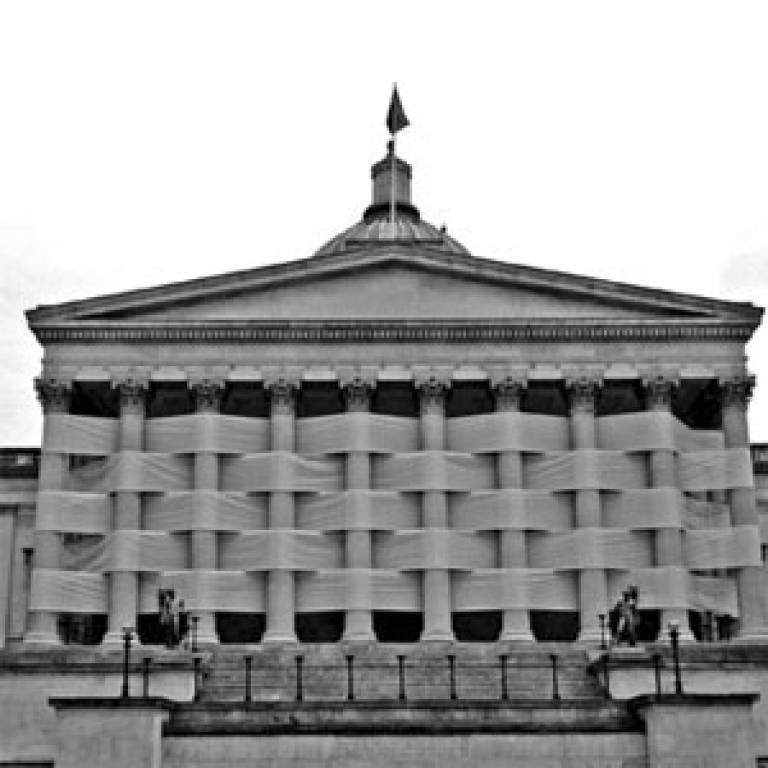 Explaining the thought process behind the project, Nicolas said:

"Untitled (Woven Portico) is a project I have been working on for 14 months, since March 2011. From my first day at UCL I was interested in this elegant and empty Portico, finding it a dignified space full of potential, just waiting to be activated.

"After a lot of studies and sketches I found something that seemed to have been contained in the Portico for a long time and needed to be made visible. I knew the form, but couldn't say exactly where it comes from. It has to do with something very old and deeply human, with the archaic gesture of weaving, with a kind of architectural remembrance of past times, as if the Portico were remembering where it came from, when huts were made of wooden posts and woven branches.

I got a lot of encouragement from my tutors and fellow students at the Slade to try and "go as far as possible" with the project. I didn't think it would be possible to realise it at first.

"It has to do with the physical contrast of heaviness and lightness, of fragility and solidity - light white fabric and Portland Stone. There was also something playful and of classical, geometric purity at the same time that I found interesting.

"The first opportunity I had to present the project in public was the 'Moreover' exhibition, organised jointly by the Slade and UCL Art Museum. In the Museum's archive I was shown the original drawings of William Wilkins, the architect of UCL's main building. I could measure the plans and re-build a 3D CAD model to produce plans and photomontages of my project.

"I got a lot of encouragement from my tutors and fellow students at the Slade to try and "go as far as possible" with the project. I didn't think it would be possible to realise it at first. The artist Julia Vogl, who created an installation last year on the Portico, has been very helpful and generous in sharing her knowledge.

"The structure is made of 226m2 of PVC mesh, heavy-duty straps and ratchets. The structure is attached on itself, supported only by the horizontal tension, so as not to touch the grade-1 listed building. The project cost £6,600, entirely funded by the Swiss Cultural Fund in Britain, UCL Business and Camden Council. UCL Business bought 15 prints of the preparatory drawings to fund the project.

"The fabric is going to be recycled into bags by BITA-Pathways, a social enterprise for people with mental health problems. The bags will be designed by Yasar Spoerndli, an award winning fashion designer and produced in BITA-Pathways workshops."

On Friday 8 June at 2.30pm, the Funk da Cirque! street circus dance troupe will perform a piece of aerial theatre and acrobatics in front of the installation.

The troupe, a group of 11-24 year olds brought together by the Roundhouse as part of its programme of creative opportunities for 11-25s, will perform a routine infused with popping, locking and break dancing.

This event will launch Camden Council's summer programme, a three month series of 60 public events and activities coinciding with the Olympics and Paralympics.