A multimedia exhibition featuring film, images and rarely seen cultural objects from Sierra Leone that explores the role cultural heritage can play in reanimating post-conflict and developing societies opens at UCL this week. 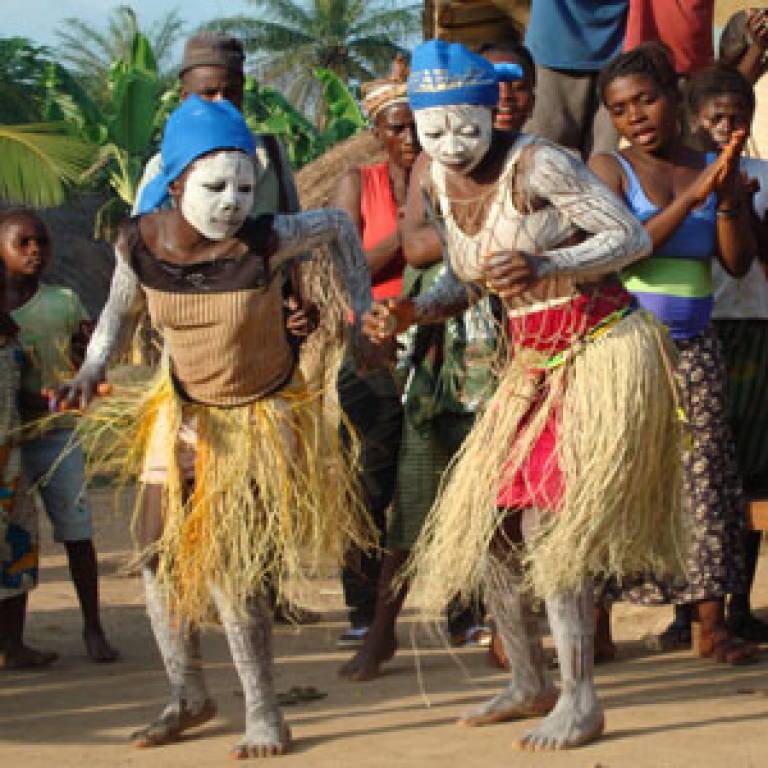 The 'Reanimating Cultural Heritage in Sierra Leone' exhibition marks both the culmination of a three-year research project funded by the UK's Arts and Humanities Research Council and led by Dr Paul Basu, UCL Institute of Archaeology, and the launch of an innovative digital heritage resource which provides access to collections across a number of different museums in the UK and Sierra Leone.

Building on research in anthropology, museum studies, informatics and beyond, the project considers how objects that have become isolated from the oral and performative contexts that originally animated them can be reanimated in digital space alongside associated images, video clips, sounds, texts and other media - and thereby be given new life.

Discussing the thinking behind the exhibition, Dr Paul Basu said: "When you see a Sierra Leonean object like a mask in a museum collection it's static, it's a dead object. But those masks were part of a living, colourful, musical dance tradition.

There's a bigger aim as well - what role can cultural heritage have in reanimating society more broadly? By bringing the collections and that heritage back to life in an engaging way, our bigger hope is that it will contribute to a broader societal reanimation

"We've been working with partners in Sierra Leone to create short video documentaries about all kinds of things relating to the country's cultural heritage. Many of those videos literally reanimate some of those museum collections. Reconnecting an object with the video then brings that object back to life to some degree.

"There's a bigger aim as well - what role can cultural heritage have in reanimating society more broadly? By bringing the collections and that heritage back to life in an engaging way, our bigger hope is that it will contribute to a broader societal reanimation."

The exhibition is split across two sites at UCL. In UCL's North Cloisters is a vibrant display of large format photographs documenting different aspects of Sierra Leone's cultural heritage, alongside an exhibition of iconic objects from Sierra Leone from the collections of the British Museum and Sierra Leone National Museum. This includes displays of traditional masks associated with the female Bondo or Sande initiation society, rarely seen stone 'nomoli' sculptures, and magical garments worn by the Kamajor militia during Sierra Leone's recent civil war.

In the North Lodge at the main entrance to UCL on Gower Street is an audio-visual installation, showing a continuous loop of short documentaries made by the project and its Sierra Leonean partners. From different music, dance and masquerade traditions to weaving and basket-making, these provide a glimpse into the wealth of Sierra Leone's little-known culture and heritage. These displays are accompanied by various panels describing the project, its objectives and activities in greater depth.

An associated event will be taking place between 17:30 and 20:00 on 2 February in the Old Refectory, UCL. Speakers include Paul Basu, Ruth Phillips, Bill Hart, Zachary Kingdon, and Sierra Leone's Director of Cultural Affairs, Fodah Jalloh, and H.E. Eddie Turay, Sierra Leone's High Commissioner in the UK.