Buried on Campus, a new exhibition at the Grant Museum of Zoology, displays a selection of bones believed to be part of a Victorian teaching collection that were discovered by construction workers underneath UCL's Main Quad in 2010. 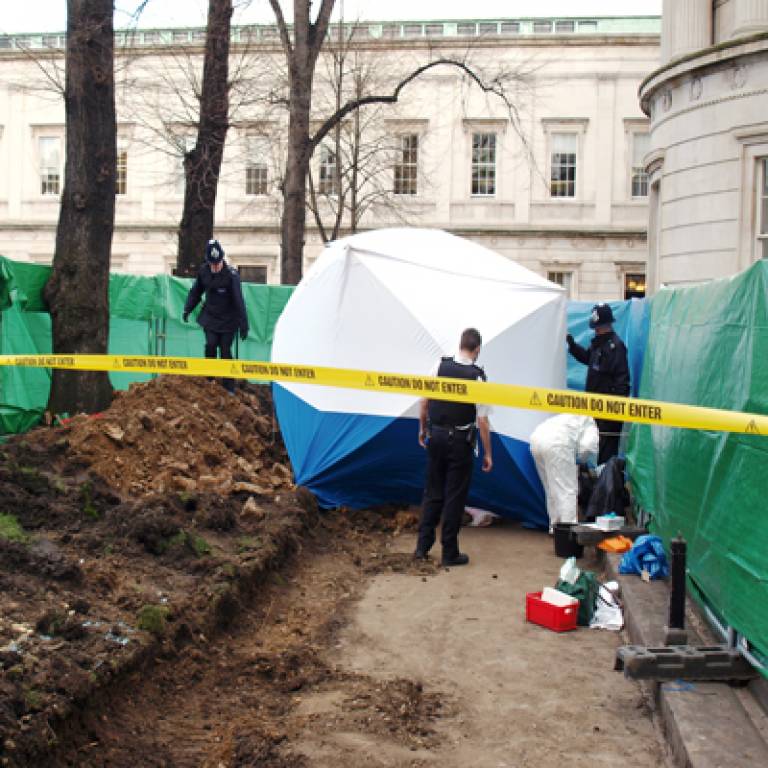 The 7,394 fragments, 6,773 of which are human and represent a minimum of at least eighty-four individuals, were buried around one hundred years ago. Over the last two years these remains have been analysed by UCL forensic anatomist and forensic anthropologist, Dr Wendy Birch and Christine King.

Analysis so far suggests that some of these remains are from an anatomical teaching collection, similar to those still used to train medical students today. Many of the bones exhibit signs of being cut with scalpels and saws, or have been written on. A significant proportion of the specimens also show clear evidence of disease.

The reason why the collection was abandoned under UCL's main quad is still under investigation and several suggestions have so far been put forward. However, the Human Tissue Act 2004 currently ensures that similar collections of human remains would never be disposed of in this manner.

Not only is this a fascinating glimpse into the history of medical teaching at UCL but this collection is being used again to teach current medical, forensic and science students

The exhibition includes a nearly complete skeleton made up of bones from several different individuals. Visitors to the Grant Museum can see how UCL forensic anatomists determine the age, sex and health status of individuals from their bones.

Other exhibits look at specific examples of diseased bones found in the excavation, including those affected by arthritis and rickets.

One early theory was that the site was a 14th century plague pit. However, the evidence uncovered suggests that the bones were in fact buried much later. The forensic team have been able to date the burial of the specimens using a Bovril jar that was found among the bones and thought to be buried at the same time.

The Bovril Company have confirmed that the jar is one of the earliest manufactured. It was produced between 1886 and 1920, suggesting that the collection could not have been deposited before 1886.

Dr Wendy Birch said: "Although only a preliminary examination has been conducted, the findings so far are comparable with the practice of modern day anatomical dissection and skeletal preparation.

"Not only is this a fascinating glimpse into the history of medical teaching at UCL but this collection is being used again to teach current medical, forensic and science students".

Jack Ashby, Manager of the Grant Museum, said: "These remains present a unique opportunity for a university museum to raise the issue of how human remains have been involved in teaching. The Grant Museum is and has always been a teaching collection.

"We are very pleased to be able to show visitors this collection alongside our own specimens. I hope it will make people think about what we can learn from collections like this. It has such an interesting story."

The excavation site also contained skeletons of domestic animals including horses, sheep, goats, cows, chickens and oysters. A total of 621 animal bones and bone fragments were excavated as well as 67 shells. Some of these are shown in the exhibition alongside complete specimens from the Grant Museum for comparison.

The exhibition at the Grant Museum runs from 23rd April - 13th July. The Museum is open from 1-5pm Monday to Friday, with a special Saturday opening on 12th May, 11am-4pm.

Image: Excavation of the UCL quad in 2010. Credit: Laurence Clarke