UCL scientists are part of an international team which has developed a novel X-ray technique for imaging atomic displacements in materials with unprecedented accuracy. 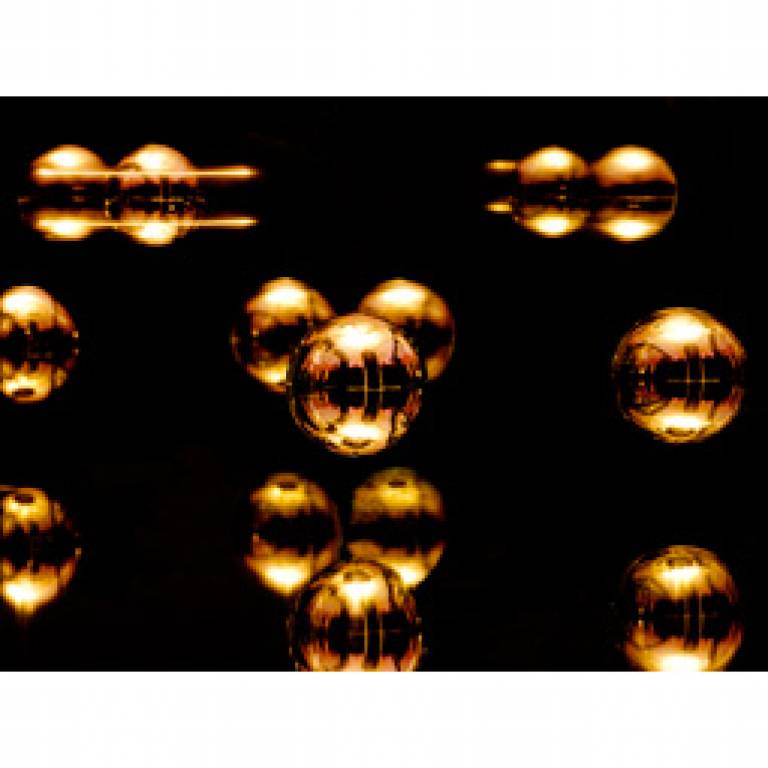 The team has applied the technique to determine how a recently discovered class of exotic materials - multiferroics - can be simultaneously both magnetically and electrically ordered. Multiferroics are candidate materials for new classes of electronic devices.

The discovery, a major breakthrough in understanding multiferroics, is published in Science (2 September 2011) and the authors include scientists from the European Synchrotron Radiation Facility (ESRF) in Grenoble (France), the University of Oxford and the London Centre for Nanotechnology at UCL.

Magnets are polarised with a north and a south pole, a characteristic which is understood to arise from the alignment of magnet moments carried by atoms in magnetic materials. Certain other materials, known as ferroelectrics, exhibit a similar effect for electrical polarisation. The exotic "multiferroic" materials combine both an ordered arrangement of atomic magnetic moments and ferroelectric polarisation, with a strong coupling between these two usually separate phenomena.

The coupling produces unusual characteristics as a magnetic field can electrically polarise the material, and an electric field magnetise it.

In 2003, Kimura and coworkers in Japan sparked interest in multiferroics by discovering the gigantic coupling between magnetism and ferroelectricity within them. The research opened up the possibility of harnessing such exotic properties for novel electronic devices. Proposals include a new type of electronic memory, in which an electric field writes data into the memory and a magnetic detector is used to read it. This process is faster, and uses less energy than today's hard disk drives.

As the displacement involves a high number of electrons, even small distances can lead to significant electrical polarisation. However, the actual distance of the displacement still came as a surprise: about 20 femtometres, or about 1/100,000th of the distance between the atoms in the material. Measuring such small displacements had previously been considered to be impossible.

"I think that everyone involved was surprised, if not staggered, by the result that we can now image the position of atoms with such accuracy. The work is testament, amongst other things, to the fantastic facilities available in Grenoble to the UK science community," says Prof. Des McMorrow, Deputy Director of the London Centre for Nanotechnology, leader of the UCL part of the project.

Dr. Helen Walker, from the ESRF and lead author on the paper, developed with her colleagues a smart new experimental technique which exploits the interference between two competing processes: charge and magnetic scattering of a powerful, polarized X-ray beam. They studied a single crystal of TbMnO3 which shows a strong multiferroic coupling at temperatures below 30K (-243 degrees centigrade), and were able to measure the displacements of specific atoms within it with an accuracy approaching one femtometre (10-15m). The atoms themselves are spaced apart 100,000 times this distance.

The new interference scattering technique has set a world record for accuracy in absolute measurements of atomic displacements. Most significantly, identification of the origin of ferroelectricty in a multiferroic material is a major step forward in the understanding of multiferroics which may in the long term lead to the design of multiferroics for practical applications.

"By revealing the driving mechanism behind multiferroics, which offer so many potential applications, it underlines how experiments designed to understand the fundamental physics of materials can have an impact on the wider world," concludes Dr. Helen Walker.

Image caption: Femtoscale atomic displacements in crystals play a big role in the electronic properties of exotic multiferroics materials, generating a mutual interaction between magnetic and ferroelectric macroscopic properties, of potential interest in the domain of advanced magnetic material for electronics. These materials combine both the crystallographic and magnetic symmetries to produce oriented displacements of atomic positions, as pictorially represented in the art image, leading to a control of electric polarization by a magnetic field and viceversa. (credit: Ghiandoni/Paolasini)

About the London Centre for Nanotechnology

The London Centre for Nanotechnology, is a UK-based, multidisciplinary research centre forming the bridge between the physical and biomedical sciences. It was conceived from the outset with a management structure allowing for a clear focus on scientific excellence, exploitation and commercialisation. It brings together two world leaders in nanotechnology, namely University College London and Imperial College London, in a unique operating model that accesses the combined skills of multiple departments, including medicine, chemistry, physics, electronic and electrical engineering, biochemical engineering, materials and earth sciences, and two leading technology transfer offices. Website: www.london-nano.com

The ESRF is an international institute funded by 19 countries where visiting researchers use powerful X-rays to explore the structure of matter and materials at the atomic scale. 7000 scientists come to the ESRF every year for an experiment, and work closely with the 150 ESRF staff scientists. Their experiments lead to 1800 publications annually in peer-reviewed journals.

Founded in 1826, UCL was the first English university established after Oxford and Cambridge, the first to admit students regardless of race, class, religion or gender, and the first to provide systematic teaching of law, architecture and medicine. UCL is among the world's top universities, as reflected by performance in a range of international rankings and tables. Alumni include Marie Stopes, Jonathan Dimbleby, Lord Woolf, Alexander Graham Bell, and members of the band Coldplay. UCL currently has over 13,000 undergraduate and 9,000 postgraduate students. Its annual income is over £700 million. Website: www.ucl.ac.uk