This year, UCL's 'Your Universe' Festival of Astronomy is running in partnership with the London Science Festival 2011. 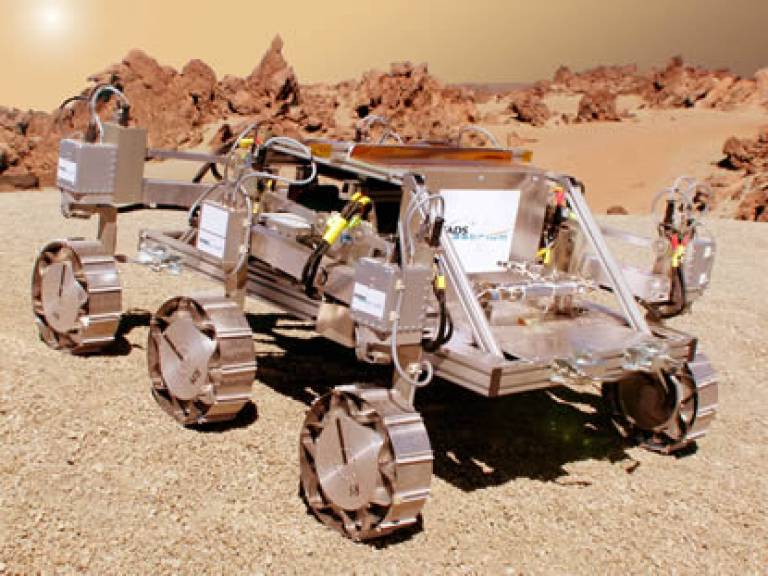 For full listings including times, dates and UCL venues please follow the links below.


On the 22 and 23 of October "Bridget", the first breadboard full-size rover developed and built as part of the ExoMars Rover Vehicle Project, will be on display in the Jeremy Bentham room at UCL.

Funded by Astrium R&D, Bridget was designed to aid in the development of the flight ExoMars locomotion system, and was later used in the preliminary testing of the autonomous navigation system.

Bridget comes to UCL after an intensive trial session on the martian-like terrain of Tenerife. In this exhibit, Bridget rovers over a simulated Mars landscape controlled remotely by an operator. Bridget speed is only a few centimetres per second, but it is powerful enough to overcome severe obstacles expected on the martian soil.

Bridget plays an important role in Astrium's outreach programme to promote its activities and to increase the student uptake of STEM subjects. In particular, she demonstrates the link between theoretical engineering and real spacecraft. Bridget captures the interest of students and the general public as a whole in a way no other outreach activity does, and engages them on a number of levels.

Dr Francisco Diego (UCL Physics and Astronomy) explains why what we see through telescopes is only 4% of the Universe - the rest is a ghost!

Dr Kevin Fong (UCL Neuroscience, Physiology and Pharmacology) takes us behind the scenes of the Space Shuttle.

Dr Lewis Dartnell (UCL Physics and Astronomy) and Dr Nick Lane (UCL Genetics, Evolution & Environment) ask "what is life?" and "where are we most likely to find ET?" in their joint lecture.

Lester Waugh, engineer at Astrium, looks at how the Mars Rover model, Bridget, has helped the development of the daily processes used to command a rover mission

Matt Melis, NASA Glenn Research Center, gives a behind the scenes perspective on the impact analysis and testing done for the Columbia Accident Investigation and NASA's Return to Flight programs for the Space Shuttle.

'Your Universe' Festival of Astronomy