Crossing your arms reduces the intensity of pain you feel when receiving a painful stimulus on the hand, according to research by scientists at UCL. 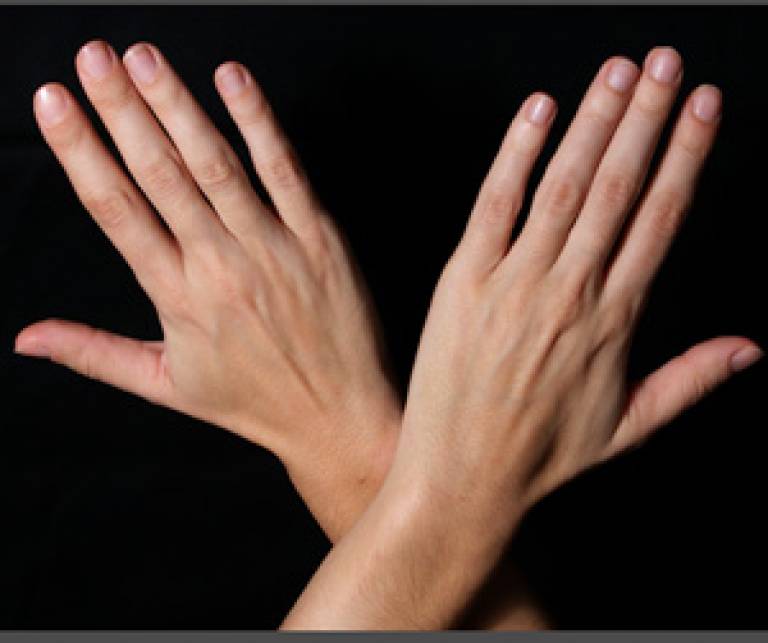 Published in the current issue of the journal PAIN, the research shows that crossing your arms over the midline (an imaginary line running vertically down the centre of the body) confuses the brain and reduces the intensity of the pain sensation.

Scientists believe that the reason for this phenomenon is due to conflicting information between two of the brain's maps - the one for you body and the one for external space.

As your left hand usually performs actions on the left side of space (and vice-versa for the right side), these two maps are used to working together to produce strong impulses in response to stimuli. When our arms are crossed, the two maps are mismatched and processing of noxious information is weakened - resulting in less pain.

"Perhaps when we get hurt, we should not only "rub it better" but also cross our arms," said Dr Giandomenico Iannetti, lead author of the paper from the UCL department of Physiology, Pharmacology and Neuroscience.

In the study, scientists used a laser to generate a four millisecond pin prick of "pure pain" - i.e. pain without touch - on the hands of a small group of eight participants, which was repeated with the arms crossed. Participants rated their perception of the intensity of the pain, and their electrical brain responses were also measured using electroencephalography (EEG).

The results from both participants' reports and the EEG showed that the perception of pain was weaker when the arms were crossed.

"This means that the areas of the brain that contain the map of the right body and the map of right external space are usually activated together, leading to highly effective processing of sensory stimuli. When you cross your arms these maps are not activated together anymore, leading to less effective brain processing of sensory stimuli, including pain, being perceived as weaker."

According to the researchers, this new discovery could lead to new innovative clinical therapies to reduce pain that exploit the brain's way of representing the body.

UCL is active in most aspects of neuroscience research to the highest standards. At the molecular level this encompasses studies on receptors, intracellular signalling, ion channels and transporters. At the cellular level, it covers most aspects of signalling within and between neurons, and also glia. At the systems level, it includes the function of neuronal networks and their relationships to higher-order cognitive processing. The Research Department of Neuroscience, Physiology and Pharmacology (NPP) brings together the majority of UCL's basic neuroscience community, with shared interests in the function of the nervous system.

Look at your body to reduce pain