UCL architectural research practice sixteen*(makers) have received an award from the Royal Institute of British Architects for '55/02', a shelter in Kielder Forest and Water Park, Northumberland that was designed, made and installed in collaboration with German manufacturers Stahlbogen GmbH, led by UCL alumni and former Bartlett staff Nick Callicott and Kristina Ehlert. 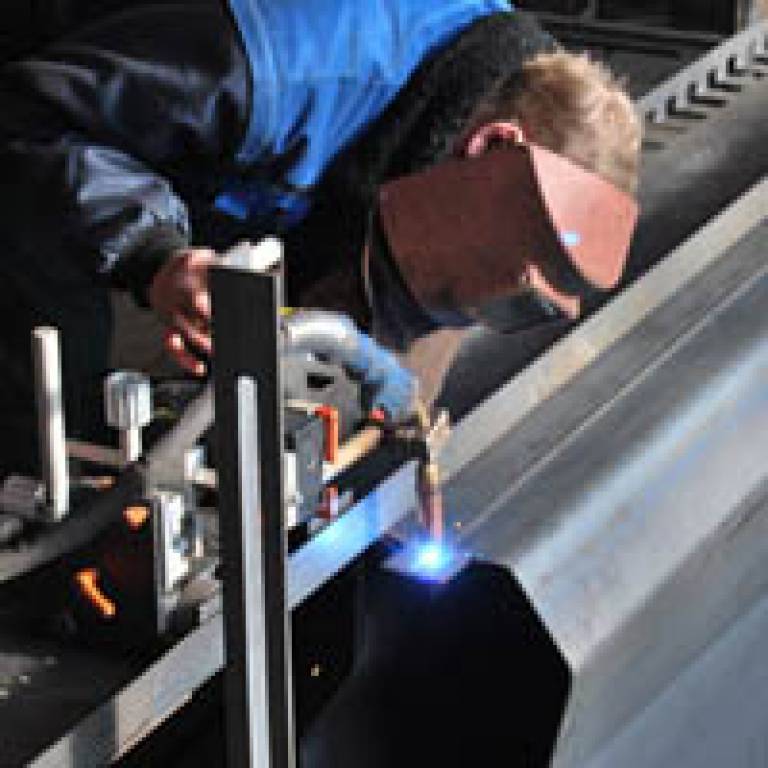 The RIBA Awards have been running continuously since 1966 and are presented for excellence in building design on an annual basis. 55/02 was commissioned by The Kielder Partnership, who have established a renowned programme in experimental art and architecture over the past decade.

In 2008 '55/02' was commissioned alongside five other projects 'to provide some form of shelter' and 'engagement with the landscape'. In response to the site's industrial history and sixteen*(makers) ongoing research in digital design methodologies and fabrication, '55/02' was developed as a 'bespoke' manufactured construct, tailored to the specific vistas and geometries of the site, and crafted through the combination of tacit knowledge in making and the complex capabilities of new digital design and fabrication techniques.

Director of Technology at The Bartlett School of Architecture, co-designer of '55/02', and partner in sixteen*(makers), Bob Sheil explains that two of the explorations within this project are the relationships between design and making, and the designer and the maker.

"On account of its malleability and interoperability with fabrication machinery, digital methodologies allow design to continue to take place through the act of making, allowing decisions to evolve and change as the ideal meets the real."

Watch a slideshow about the project

In addition, the project allowed for design decisions to be shaped by material performance, assembly techniques and the experience of craftsmanship.

"There is a difference between design that is represented through drawing and that which is made," says Sheil. "Intent and ideas are translated from one to the other, and in that transition some things are gained and others lost. In this instance we set out to dissolve the boundaries that exist between both modes, and develop a way of working that would oscillate freely between both realms."

'55/02' was entirely prefabricated at Stahlbogen's factory in Blankenburg Germany between February and April 2009, allowing the designers to develop and hone their ideas at 1:1. It was completed in June 2009, and has received approximately 30,000 visitors since.

The award was collected at the RIBA ceremony by Emmanuel Vercruysse of sixteen*(makers), who played a pivotal role in designing the project alongside Sheil, Callicott, and additional colleague Dr Phil Ayres. The design contract was managed through UCL consultancies Ltd, and sixteen*(makers) wish to extend their sincere gratitude to Stephanie Beesley -Suffolk of UCLC for her support and commitment at a key early stage.

A monograph on the project is in production and due for publication this summer.

The Bartlett School of Architecture is part of a truly multidisciplinary Faculty of the Built Environment at UCL. It is located at the heart of the world's largest cluster of innovative architecture and engineering firms in London. It attracts an extraordinary variety of staff, students and international visitors, all of the highest calibre.

Bartlett tutors are at the forefront of international research and teaching, encompassing interdisciplinary collaboration and methodologies. Bartlett students are amongst the most sought after in the UK and Europe for their outstanding drive, creativity and skills.

Work produced in the school is regularly awarded international prizes for its outstanding experimental qualities and is widely published and exhibited at galleries and events worldwide. The work of the school is also regularly selected to feature at the highly regarded Royal Academy Summer Exhibition. The annual Bartlett Summer Show attracts over 10,000 visitors and forms a key event in the UK architectural calendar.

The Bartlett offers amazing resources, including the facilities of UCL, a full world-class research university, an impressive workshop and the advanced London Digital Manufacturing Centre. It also organises one of the best international lecture series, while hosting numerous conferences, seminars and workshops.

Image: Work on the construction of 55/02