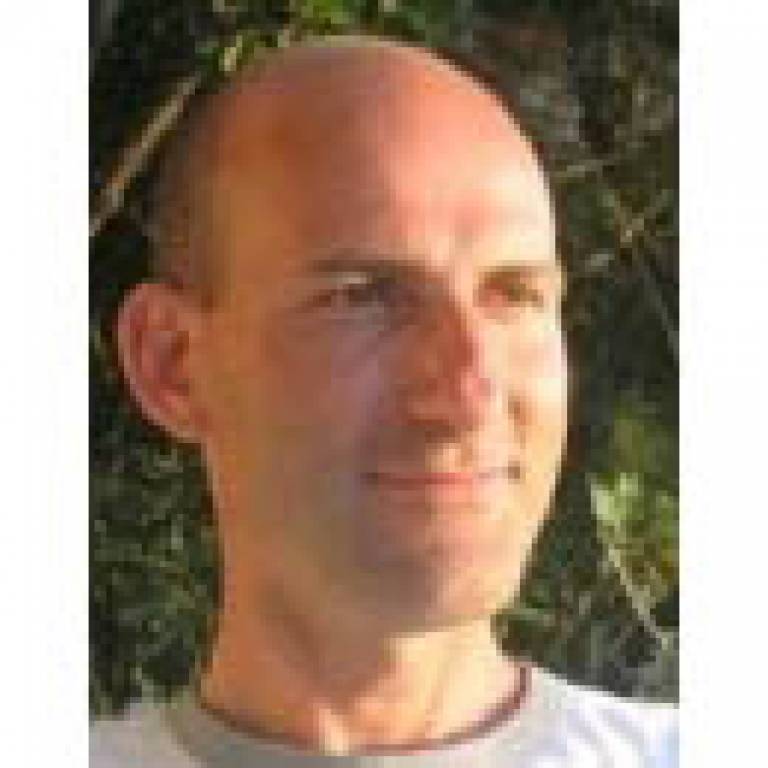 Professor Matteo Carandini is the GlaxoSmithKline Professor of Visual Neuroscience at the UCL Institute of Ophthalmology. His research is aimed at understanding how neuronal cells in a region of the brain called the visual cortex integrate and process sensory information received by the eyes.

Q: Can you tell us a little bit about your research and what you hope to achieve in the long term?

I am trying to understand the activity of single neurons and populations of neurons in a region of the brain called the visual cortex. This activity depends not only on visual stimuli, but also on what the rest of the brain is doing. In the lab, we record brain activity of mice while they navigate a virtual environment, and we seek to summarize this activity using simple computational models. The long-term goal is a cohesive understanding of how the brain processes visual information. This goal probably won't be achieved in my lifetime for the human brain, but for the mouse brain it might.

Q:  How are new technologies going to enable the restoration of visual function/sight?

Most of the exciting work at the moment is done in the retina, with artificial prostheses and soon with biological solutions such as those based on stem cells or optogenetics (a technique that modifies neurons genetically to make them respond to light). For some patients, however, such as those with damage in the optic nerve, the prosthesis needs to be more central. In this respect, my bets would be on a cortical visual prosthesis based on optogenetics. By making the cortex respond to light directly we could imagine stimulating it with appropriate light sources and essentially bypass the eyes.

Q: Were there key moments in your research life that led you to where you are today?

Twenty years ago I went to a summer course at Cold Spring Harbor, which was run by David Heeger (then of Stanford University) among others. I became fascinated by his ideas on the simple arithmetic governing the responses of neurons in visual cortex. He became a long-distance mentor and then a collaborator. His ideas and his example have shaped my career. Another fundamental encounter was with Massimo Scanziani (now at University of California, San Diego) though if I say how influential he has been for me he will be embarrassed. Both are great examples of how to tackle scientific questions and of how to move into new areas of research.

Q: What advice would you give to someone starting out in a research career?

I would suggest seeking mentorship in various places and at various levels. For instance, if you are a PhD student, make sure you learn not only from your PhD advisor, but also from experienced postdocs in the lab, from other faculty in your university and elsewhere, and ideally also from some great minds sligthly outside your field of research. Summer courses can be the ideal places to meet these potential mentors.

Q: What's the most interesting research you've been involved in?

I advocate the marriage of modelling and experiment, and yet my most pleasant moments have been the result of pure experiment. They gave me a hint of the rush that great scientists must have felt when they made discoveries. For instance, in my laboratory we saw waves of activity travelling across visual cortex, and it was something that we were not prepared to see, as it violates all that we had studied about the functional architecture of visual cortex. Granted, there was some evidence for them already in the literature, but seeing them travel across cortex was a great pleasure, and has made my research take a turn.

Q: Why did you choose to study the visual system over other areas of the brain?

Visual cortex is an ideal workbench to study the cerebral cortex: we know how to get lots of spikes from it (thanks to Hubel and Wiesel), we can stimulate it with precision and ease (thanks to the video cards present in all computers), and we can easily image it (it lies largely on the surface of the brain). For this reason, progress in understanding visual cortex has been substantial, allowing scientists to produce simple yet very powerful models of the underlying computations.

Q: Where have you travelled for your research? Did you expect to travel so much for your career?

Scientists travel quite a bit, but so do people with other kinds of jobs. What sets us apart from other professions is that our marketplace for jobs is truly global. It is common for us to pick up and move our entire lives to new countries. I am arguably not even in the middle of my career and I have already moved 6 times, and four of them involved crossing an ocean. In the first moves I was by myself, but later ones involved more and more people and items - family, collaborators, their own families, pets, furniture, lab equipment... They were quite a production! I certainly had not anticipated this, and I hope to be done with moving.

Q: How has working at UCL benefitted your research?

UCL is a wonderful collaborative environment. For example, consider a key technique that we now use in my lab, a virtual reality environment for mice. The central elements of this environment were developed by the Hausser lab here at UCL, and by sharing these with the rest of the UCL neuroscience community they have given UCL a real competitive advantage. Collaboration is a great asset at UCL and to leverage it I co-advise about half of the students and postdocs in the laboratory with other scientists within UCL or affiliated with UCL: two with Michael Hausser, one with Kate Jeffery, one with Maneesh Sahani, and two with Kenneth Harris. Through these collaborations I am learning a lot, and definitely tackling problems that would have been too hard to tackle by myself.

Q: What do you consider to have been the most important neuroscience discovery over the past few decades?

Sorry to be boring but I'll say optogenetics and grid cells (brain cells that help represent where an animal is located in space). The first is a great technique, though it is arguably yet to give us any new insight on how the brain works. The second is an actual peek at how the brain works, and funnily enough it was obtained with a really simple and established technique.

Q: What is your favourite brain related fact?

When you disconnect communication between the hemispheres by cutting the callosum, the two hemispheres develop different interpretations of what is going on (and no way to reconcile them). Those patients have effectively two brains in one head. This work led to lots of pop psychology (artists "using their left brain", etcetera) but it should not be discounted: at the root it is deep and in fact outright unsettling.