Players of the game rock paper scissors subconsciously copy each other's hand shapes, significantly increasing the chance of the game ending in a draw, according to new research. 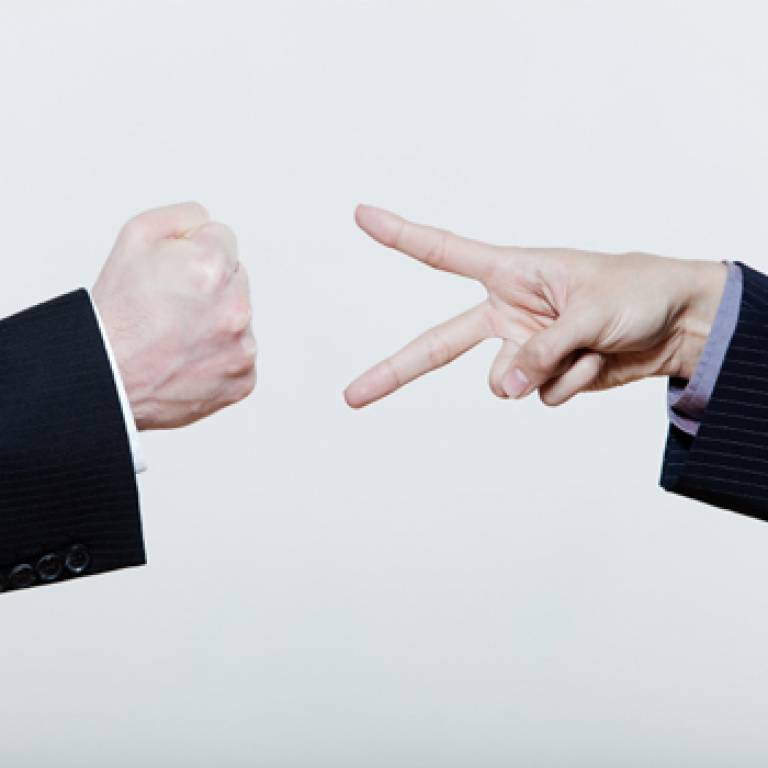 A study published today in the Proceedings of the Royal Society B shows that even when players lose out by drawing a game, they can't help themselves from copying the hand gestures of their opponent.

In an experiment researchers recruited 45 participants to play rock-paper-scissors in one of two conditions. In the first condition, both players were blindfolded. In the second, one player was blindfolded and the other was not. Players who won the most games within a 60 game match received a financial bonus, so although players may have preferred to draw rather than lose, the best outcome could only happen through avoiding draws.

Richard Cook, lead author of the paper from the UCL Department of Cognitive, Perceptual and Brain Science, said: "From the moment we're born, we are frequently exposed to situations where performing an action accurately predicts seeing the same action, or vice versa. Parents seemingly can't help but imitate the facial expressions of their newborns - smiling, sticking their tongues out and so on."

He added: "This experience causes the impulse to imitate to become so ingrained it is often subconscious, for example when one person starts tapping their foot in a waiting room it is not uncommon for the whole room to start tapping their feet without thinking."

In order for automatic imitation to influence responses in rock-paper-scissors the sight of an action needs to excite the motor program for making that action almost instantaneously. However, there is good evidence to believe this is possible.

Automatic imitation is thought to be mediated by the human 'mirror neuron system'; a network of brain regions predominantly responsible for action execution, but which also respond to the passive observation of actions. This system is known to respond immediately to the sight of action, giving rise to an imitative bias almost instantaneously.

Richard Cook said: "It is well established that imitative responses are executed faster than non-imitative responses on controlled experimental tasks where reaction times average between 200-400 milliseconds. However, the present finding confirms that imitation is often 'automatic' in the sense of being hard to stop."

Proceedings of the Royal Society B

Coverage in the Daily Telegraph