A fossil from north-eastern China has revealed that terrestrial reptiles were giving birth to live young at least as early as 120 million years ago. 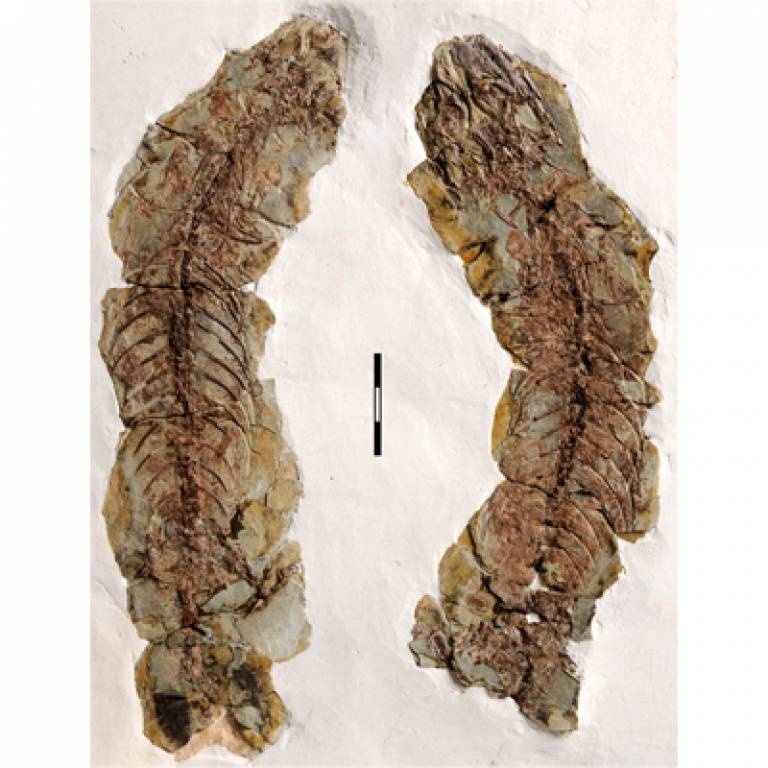 The newly discovered fossil of a pregnant lizard proves that some squamate reptiles (lizards and snakes) were giving birth to live young, rather than laying eggs, in the Early Cretaceous period - much earlier than previously thought. The fossil shows a pregnant female filled with the tiny skeletons of more than 15 baby lizards at a stage of development similar to that of late embryos of modern lizards. The mother lizard, which is 30 centimetres long (excluding her tail), probably died only a few days before giving birth.

The discovery is described in the journal Naturwissenschaften by scientists from UCL (University College London) and the Institute of Vertebrate Paleontology and Paleoanthropology at the Chinese Academy of Sciences, Beijing.

"Mention live birth and most people think only of furry mammals, but roughly 20% of living lizards and snakes also produce live young rather than laying eggs," said Professor Susan Evans, joint lead author of the paper from the UCL Department of Cell and Developmental Biology.

"We previously thought that lizards adapted to live birth after mammals, but now it looks like it happened at roughly the same kind of time. This specimen is the oldest we have seen, which implies physiological adaptations, like adequate blood supply to the embryos and very thin shells - or no shells at all - to allow oxygen supply, evolved very early on," she added.

The fossil comes from world famous rocks of the Jehol Group of north-eastern China that have produced hundreds of exquisite specimens of fish, amphibians, reptiles, birds and mammals, as well as plants and invertebrates.

The mother lizard is identified as a specimen of Yabeinosaurus, a large, slow-growing, and relatively primitive lizard that is well-represented in the Jehol Biota, although previously nothing was known of its reproductive habits. Up until now the fossil records only contained examples of marine lizards giving birth to live young.

A switch from egg-laying to live births is usually associated with cold, dangerous environments where eggs are unlikely to survive. The pay-off is that the mother is limited in terms of movement and self-defence. This explains why scientist previously thought that live birth in extinct reptiles was restricted to specialised aquatic groups like marine ichthyosaurs, as movement in water is much easier.

Professor Evans said: "We do know that this lizard lived near to water and we think it likely that they could swim even though they primarily lived on land. This would make sense as a pregnant lizard would be less constrained by carrying offspring - she'd be able to escape into water if a hungry dinosaur came along!"

The work was funded by a joint Anglo-Chinese project funded by the Royal Society and the National Natural Science Foundation of China.