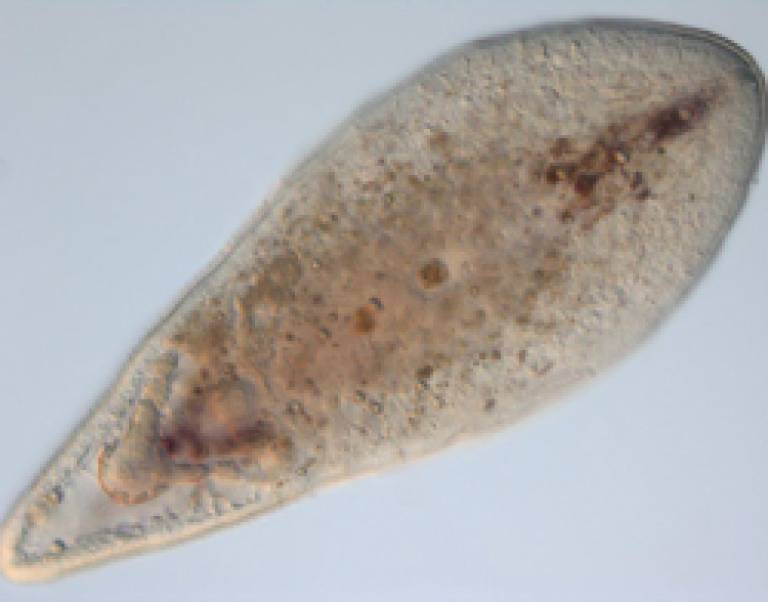 Two groups of lowly marine worms are related to complex species including vertebrates (such as humans) and starfish, according to new research.

Previously thought to be an evolutionary link between simple animals such as jellyfish and the rest of animal life - the worms' surprising promotion implies that they have not always been as simple as they now appear.

Although the marine worms Xenoturbella and Acoelomorpha are very simple animals - they lack a developed nervous system or gut - they have been a source of much debate among zoologists.  Acoelomorphs were reclassified in the1990's as an early branch of evolution - the crucial link between the very simplest animals such as sponges and jellyfish and the rest of the animal kingdom including humans, starfish, insects and molluscs.

Now, in research published online today in Nature, an international team lead by scientists from UCL (University College London) and the Université de Montréal have shown that neither type of worm is an early branch of evolution.

They show that both groups descended from the same ancestor that gave rise to the complex groups of animals that includes vertebrates and starfish.  This implies that the worms have in effect 'evolved backwards' into much simpler looking organisms.

Specimens of Xenoturbella were collected from the mud at the bottom of a Swedish fjord where it eats bivalve molluscs; the acoelomorphs are found in various marine environments - one called Meara stichopi even makes its home in the throat of a sea cucumber.  Scientists compared hundreds of genes from both Xenoturbella and the Acoelomorpha with their counterparts from a whole range of animal species to determine their evolutionary relationships.

The results show that the two groups constitute a newly classified phylum (a major division of life), which the authors name the 'Xenacoelomorpha'.  The xenacoelomorph phylum joins the three known phyla of deuterostomes: vertebrates (including humans), echinoderms (e.g. starfish) and hemichordates (acorn worms).

Professor Max Telford, from the UCL Department of Genetics, Evolution and Environment, and joint leader of the research said: "Because the simple Xenacoelomorpha are descended from the same ancestor that gave rise to complex groups such as vertebrates, echinoderms and hemichordates, these simple worms must have lost a lot of the complexity that they originally possessed."

Professor Telford said: "We can no longer consider the acoelomorphs as an intermediate between simple groups such as jelly fish and the rest of the animals. This means that we have no living representative of this stage of evolution: the missing link has gone missing!"

Professor Hervé Philippe from the Université de Montréal said: "This is the happy result of a more than ten year struggle with these highly unusual organisms that have proved very difficult to locate on the tree of life. Improvements in DNA sequencing technology and in mathematical methods to infer evolutionary history were key to solving the conundrum of Xenoturbella and the acoelomorphs"

UCL Research Department of Genetics, Evolution and Environment brings together scientists with shared interests in genetics, evolutionary and environmental biology. It traces its origins to the Department of Comparative Anatomy, founded in 1826 and incorporates the Galton Laboratory. Current research at the Department includes evolutionary and environmental biology, genetics including human genetics, and systems and theoretical biology.