A team of researchers from UCL Earth Sciences departed today for the Arctic to test how well sea-ice thickness is measured by the European Space Agency's ice satellite CryoSat-2, originated at UCL. 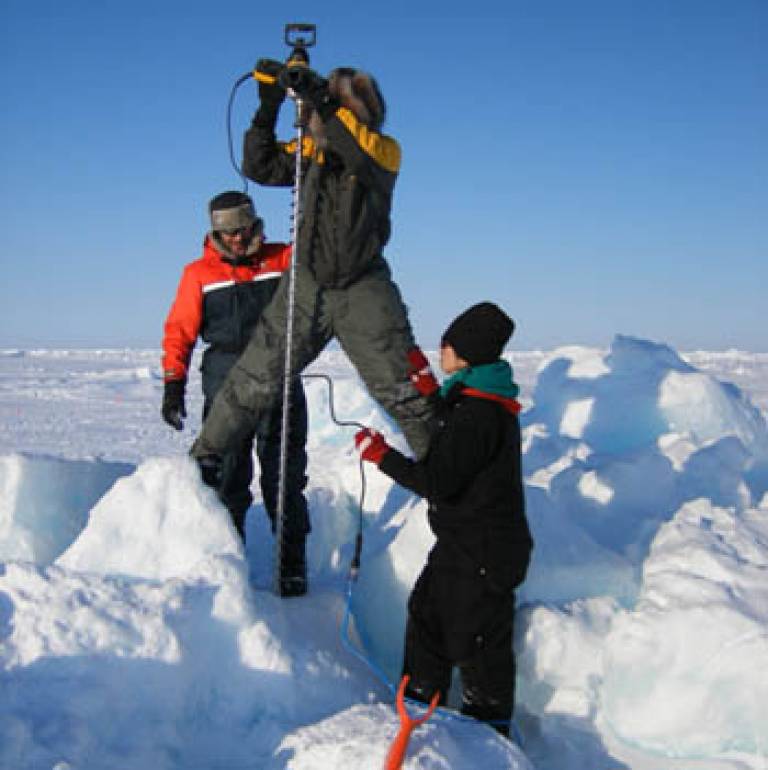 CryoSat-2 chief scientist Professor Duncan Wingham, who is based at CPOM, first proposed the satellite in 1999. It was designed to measure changes in ice thickness in the Arctic and Antarctica with unprecedented accuracy, and launched in April 2010 from the Baikonur cosmodrome in Kazakhstan.

The project team have designed an experiment to check how well the radar can see through snow, which will enable them to test the accuracy of the data from the satellite. They will take measurements at the Arctic using a radar similar to the one on board the satellite to compare them with measurements taken by CryoSat-2 from space.

The researchers will carry the radar onto the sea ice on a sledge, and will study the snow at the same time. Aircraft from the European Space Agency and NASA will also fly over them, taking measurements with radars and lasers to compare what they see on the ice with what CryoSat-2 sees from space.

Dr Giles explained: "Just as an X-ray can see through our skin, the CryoSat-2 radar can see through clouds and cold, dry snow. Sea ice is often covered by a layer of snow, but that snow is not always cold and dry, and its properties can change from area to area. We will therefore investigate the snow cover in different locations and look at how changes in its properties, such as density and wetness, affect the ability of the radar to see through it to the ice beneath."

It will take the researchers over two weeks to reach the frozen ocean, where they will conduct their experiments.

Image: Drilling a ridge on an earlier expedition to the Arctic (credit: Dr Katharine Giles)

Researchers at the Centre for Polar Observation and Modelling (CPOM) study processes in the Earth's polar latitudes that may affect the Earth's reflecting power, polar atmosphere and ocean circulation, and global sea level. They use theoretical and laboratory-derived understanding to form new models of interactions between the ice, ocean and atmosphere, and use ground and satellite observations to test the predictions of these and other climate models.

CPOM is funded by the Natural Environment Research Council and is part of the National Centre for Earth Observation. It has research groups in UCL Earth Sciences, the University of Bristol and at the University of Leeds.